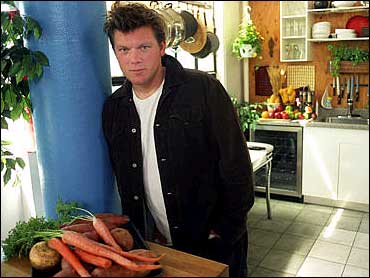 Our Chef on a Shoestring this week is no stranger to television. Tyler Florence has appeared on various shows on Food Network including, "Tyler's Ultimate Planet" and "Food 911."

On his visit to The Saturday Early Show, we asked him to create a three-course meal for four on our $30 budget.

Florence's menu: an appetizer of Chilled Asparagus With Citrus Viniagrette; an entrée of Roasted Chicken with Citrus Vinaigrette and Romaine Hearts; and for dessert, Rosemary Panna Cotta with Berries and Honey.

Having traveled across the country to help everyday people with their cooking challenges, Florence has developed a unique perspective on how Americans like to eat and cook. He is a champion of uncomplicated recipes, bright flavors and fresh food, which he believes is the type of cooking that comes from a "real kitchen" -- a place dedicated to culinary honesty.

Florence has received acclaim from the national culinary community for his creativity and dedication to the art of cooking. He has been recognized as a leading chef by publications such as Food & Wine, GQ, the Wall Street Journal, USA Weekend and People magazine.

In 1991, Florence graduated with honors from the College of Culinary Arts at Johnson & Wales University's South Carolina campus. After relocating to New York City in 1992, he honed his culinary skills under the tutelage of some of the city's premier chefs, including Charlie Palmer at Aureole, Marta Pulini at Mad 6, and Rick Laakonen at River Café.

In 1998, Florence opened the critically acclaimed Cafeteria in Manhattan as executive chef. Under his direction, the restaurant received a nomination for "Best New Restaurant" in Time Out New York. While firmly establishing his reputation and credibility on the New York food scene, Florence also made his television debut in 1996 with guest appearances on Food Network.

Tyler Florence was in New York City as a star of "Chefs On Broadway," a musical featuring A-list chefs. This year, he begins production of his fifth season of "Food 911."

Blanch: According to the Food Lover's Dictionary it means to plunge food (usually vegetables and fruits) into boiling water briefly, then into cold water to stop the cooking process. Blanching is used to firm the flesh, loosen skins (as with peaches and tomatoes) and heighten and set color and flavor (as with vegetables before freezing). Florence blanched the asparagus for his first course.

Romaine Hearts: Romaine hearts are the mild and crisp leaves in the center of romaine lettuce. You can buy just the hearts, which saves you the prep work. Romaine hearts have a wonderful crunchy texture. Florence used romaine hearts in his main course.

Panna Cotta: Panna cotta is Italian for "cooked cream." It is a light custard served cold, accompanied typically with fruit or chocolate sauce. Florence made panna cotta for his dessert, served with berries tossed in honey.

Bring a pot of lightly salted water to a boil. Meanwhile, fill a large bowl with ice water.

Trim off the woody ends of the asparagus. Add the asparagus to the boiling water. Let the asparagus cook for 3 minutes. Shock the asparagus by plunging them into the ice water. This will stop the cooking process and help retain the bright green color.

In a blender, combine all the citrus juices, zests, garlic, mustard, salt and pepper. Turn on the blender, and gradually drizzle in the oil until the vinaigrette thickens. Remove from blender and set aside.

Drain the asparagus and arrange the spears on a serving platter. Pour on the vinaigrette, garnish with fresh mint, and let everyone serve themselves.

Preheat the oven to 400 degrees F. Rinse the chicken with cool water, inside and out, then pat it dry with paper towels. Season the inside of the chicken generously with salt and pepper.

Stuff the lemons halves, thyme and garlic cloves in the cavity and place the chicken in a roasting pan fitted with a rack. Fold the wing tips under the bird and tie the legs together with kitchen string. Drizzle the oil all over the chicken. Use your hands or a pastry brush and make sure the chicken has been coated with the olive oil.

Roast the chicken for one hour; pop an instant-read thermometer into the thickest part of the thigh; if it reads 160 degrees F, it's done. Allow the chicken to rest for 10 minutes so the juices can settle back into the meat. Remove and discard the skin from the chicken.

Pull the chicken from the bone and shred the meat, with your fingers or two forks. Put the shredded chicken in a large bowl and squeeze the lemon halves that have cooked inside the bird over the meat to moisten.

In the meantime, place all the vinaigrette ingredients in a mason jar. Season well with salt and pepper. Mix with a fork to combine, put the cap on and shake vigorously to combine.

To serve: Place the romaine hearts, mint and tomatoes on a large platter and top with the shredded chicken and croutons. Drizzle with 1/2 of the dressing, serve the remaining dressing on the side. Let everyone serve themselves.

Bake in 225 degree F oven for 1 hour or until crisp and light golden, stirring occasionally so all sides toast. Cool. This will make about two to three cups. Store in plastic bags secured with tie; will keep about 1 month.

To make the panna cotta, combine the cream, milk, sugar, vanilla scrapings, lemon peel and rosemary in a medium saucepan over medium heat and bring to a simmer.

Combine the powdered gelatin with 2 tablespoons of cool water in a bowl. Let stand for 3 minutes. When the cream mixture comes to a simmer, take it off the heat. Strain.

Pour the gelatin mixture into the strained cream mixture.

Divide the mixture evenly among four coffee cups and refrigerate covered until set (about 3 hours).

Place the fruit and honey in a bowl and toss well. Smear a spoonful of the fruit over the panna cotta in each cup and serve.