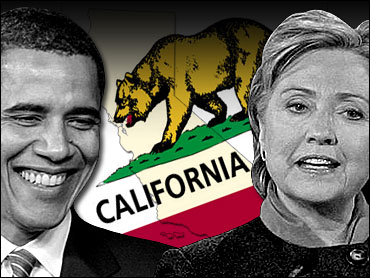 In the early voting states of Iowa and New Hampshire, presidential politics was local: The candidates crisscrossed the state, shaking hands and campaigning in coffee shops, in hopes of winning voters over one-by-one.

But for the past week or so, with Super Tuesday's de facto national primary on the horizon, candidates been engaged in a much broader, more complicated battle. Nowhere is that more apparent than in California, where there are more delegates up for grabs on Tuesday than anywhere else, and where the retail politics of the early contests simply won't cut it.

"As they say, a rally in California is two people watching a political commercial on TV," said Democratic strategist Chris Lehane.

In those early states, the campaigns were after wins: They could generate positive media attention and give voters the sense that a candidate is likely to win his party's nomination.

Now, however, with candidates locked in two-way races, the campaigns have shifted their focus from building momentum to accumulating delegates. On the Democratic side, where there are no "winner take all" primaries, the candidates are looking to maximize their rewards in every state, including those where they do not expect to win the most votes.

In California, 241 of the states 441 delegates are allocated based on what happens in 53 congressional districts, each of which is allotted a certain number of delegates based on voter turnout in past years. As a result, the campaigns are involved in a complicated chess game to maximize delegates by focusing on specific regions of the state.

"We'd like to win California, that would obviously be our most desirable outcome," said Debbie Mesloh, Barack Obama's spokesperson in the state. "But that said it's not a winner take all state, and this is a race for delegates."

Further complicating the battle for California is the cost of campaigning in a large, diverse state where television ads and mailers don't come cheap.

"The expense factor is huge," said Berkeley Political Science Professor and UC Washington Center Director Bruce Cain. "There are multiple media markets and some of them are the most expensive media markets in the country. So you have to think very hard about how you use your resources."

Northern California, and specifically the San Francisco Bay Area, has been a "very strong" center of support for Obama, according to Mesloh. The region has significant populations of antiwar voters, white liberals, and African-Americans, and it is less expensive to run television ads there than in the Los Angeles area.

But there are perils for the Obama campaign in ignoring the rest of the state, in part because 129 delegates are allocated based on the statewide vote.

"Their resources have to be directed primarily in Northern California, but the numbers in Southern California are so huge," said California attorney and longtime Democratic strategist Darry Sragow. (There are more voters in Los Angeles County than in some states.) "If you ignore Los Angeles, it's going to have a pretty dramatic impact on a statewide basis."

The Hillary Clinton campaign's strength lies with female voters, who are expected to outnumber men by a wide margin, Latinos, who could make up a quarter of the Democratic vote and who both campaigns have been targeting with Spanish-language ads, and working class voters. Clinton also has a built-in advantage thanks to her husband's strong ties to the state.

"One enormous advantage that Hillary Clinton has - the people of California know the Clintons, they know firsthand changes made in this state during those 8 years," said former California Governor Gray Davis, a Clinton supporter, who cites the couple's work to get health insurance for children.

Davis added that it would be difficult for Obama to connect to California voters because he is a relative newcomer to the political scene.

"In a state this big it's hard to make an impact real quick," he said.

Until recently, polls showed Clinton with a double-digit lead in California. The latest surveys suggest the race has narrowed significantly, and the Illinois senator received the endorsement of the Los Angeles Times over the weekend.

That won't make a difference to those voters who have already cast their ballots, however. California residents have been able to mail in their votes since right around the time of Clinton's surprise victory in New Hampshire, and up to 50 percent of the primary votes are expected to have been mailed in before Election Day, according to Mesloh.

"The gender gap, Latino gap, and participation level of young independents excited by Obama are what's going to make the difference," said Cain. "If Obama can narrow the margin among Latinos, get a huge split among blacks, and the electorate is more than 9 or 10 percent independents, it's going to get tight."

"If Obama were to win California, it would be a stunning upset," Sragow said. "If he were to get real close, that would signal that he remains fully competitive in this race. I think he's just got to come out of here, leaving aside the delegate count issue, looking as though this is still a very competitive two-way race. If he's within three, in the expectation game of politics, he's won."

And Clinton? "Her mission is to blow him out," he said.

Cain believes neither Democratic candidate is going to emerge from the California primary or Super Tuesday more generally with a significant delegate advantage.

"On the Republican side the rules are going to end the contest, even though it's quite possible that John McCain won't get a majority, because many states are winner take all," he said. "On the Democratic side, unless somebody not only gets a majority but a substantial majority, it's going to be very hard for someone to break out of the pack."

Lehane agrees, predicting that the campaigns will "emerge with a relatively even number of delegates on Tuesday." If that's the case, he said, the results in California will take on an added importance.

"Whoever wins California in terms of pure percentages is who is the winner of Super Tuesday, because California is the biggest and most important state out there, and a state that no one had a natural relationship with," Lehane said.

He argues further that a candidate that shows success in the state is signaling that he or she will do well in a general election.