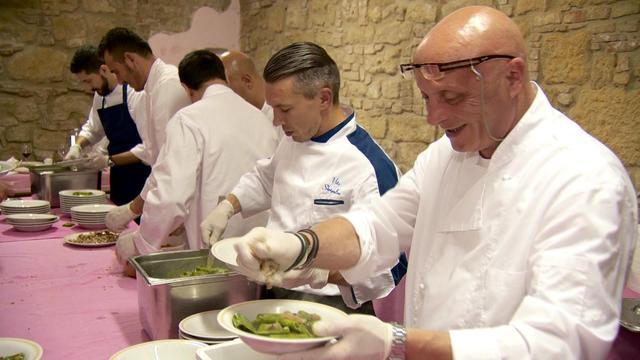 In a 13th century fortress, on the hilltop of a Tuscan town preparations were underway for a rather unlikely dinner.

Armed guards kept watch above as the aperitivo was laid out in the courtyard and as Rosario Campagna served prosecco. He's also serving a 26-year sentence for murder, reports CBS News' Seth Doane.

The Fortezza Medicea -- with its 138 dinner guests, hors d'oeuvres and sparkling wine -- is a prison in Volterra, Italy. It is home to some of the country's most hardened criminals, and for eight nights a year it's host to a dinner where the prisoners do all the work.

It's designed to raise money for charity, build skills and give inmates the chance to interact with those on the outside.

It's a "whiff of freedom" said one inmate named Vito, who is serving life for murder. He added, "And that means happiness."

In the kitchen, these criminals are more focused on the future than their troubled pasts. Or, at least, the next few hours.

Lifer Francesco Innocenti is in for aggravated murder.

Maria Grazia Giampiccolo is the prison's warden. She says the program provides experiences both professional and social.

Asked if the program is working she said, "Absolutely, yes. We've been doing these dinners for over 11 years and about 30 young men now work in restaurants. One owns a restaurant. We've raised over $140,000 for charity and had over 14,000 guests."

The prison brings in guest chefs to teach the inmates.

Dinner was served in a former church on the prison grounds and while the food got good reviews, the real draw was the novelty.

"It's very strange. Because we don't know if we come -- and if we come back," one of the diners said of eating in the prison.

Joking aside, by the end of dinner curiosity had given way to a connection. The prisoners sang a song they wrote about togetherness and for a moment, inside this prison, the walls seemed to disappear.