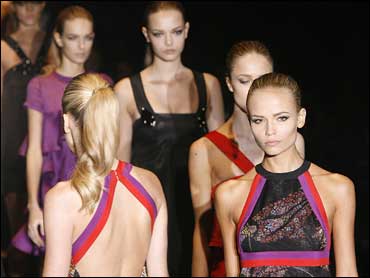 Italy's government and fashion industry officials joined forces Saturday in a campaign against anorexic models, which includes attention to "full-bodied" Mediterranean beauties and a commitment to add larger sizes to collections so young women can see that bigger can also be beautiful.

The premier's office said that the self-regulating code for Italy's highly competitive fashion industry would be signed in Rome next week.

The death from anorexia last month of a 21-year-old model in Brazil helped spur the campaign against unhealthily rail-thin models on fashion show runways.

"The government and fashion associations have made a strategic alliance to go down a common road in the fight against anorexia," Youth Policy and Sports Minister Giovanna Melandri said in a statement issued by the premier's office.

Weeks ago, Melandri, who stands out in the Cabinet as a fashionable dresser with a trim figure, urged the fashion industry to emphasize larger sizes for women instead of tinier sizes on the runways.

The code "wasn't stipulated with the intention of imposing something on someone," said Stefano Dominella, president of a lobby for Rome haute couture. Instead, the aim is "regulating the world of fashion, so that it doesn't get pointed out as being responsible for the dramatic facts in the news," Dominella said in the statement.

Those signing on to the campaign pledge said that the fashion world will start giving importance to "a model of healthy, sunny, full-bodied Mediterranean beauty that Italy has historically contributed" to the international scene.

Earlier this month, a major Brazilian fashion event moved to bar models under the age of 16, part of a national effort to increase awareness about eating disorders.

In September, Madrid's Fashion Week banned models with a body mass index of less than 18. Body mass index is a calculation doctors normally apply to study obesity, and anyone with an index below 18.5 is considered underweight.