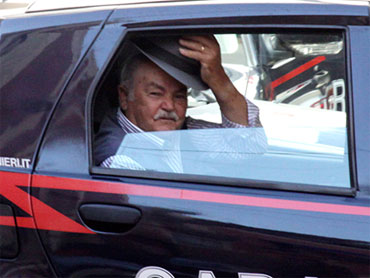 Italian police on Tuesday carried out one of the biggest operations ever against the powerful 'ndrangheta crime organization, arresting 300 people including top bosses, and seizing million of dollars (euros) in property.

The man believed to be the 'ndrangheta's top boss, Domenico Oppedisano, was picked up earlier in the day in Rosarno, a small coastal town in Calabria, the southern region where the organization is based, police said.

Also arrested was the man in charge of the gang's businesses in Milan, where the 'ndrangheta has been making major inroads.

The pre-dawn raids Tuesday involved some 3,000 police across the country. Charges include murder, extortion, arms and drug trafficking and criminal association.

Investigators described the operation as one of the biggest blows ever to an organization that today is considered more powerful than the Sicilian Mafia. Interior Minister Roberto Maroni said the sweep struck at the heart of the 'ndrangheta in terms of both its organization and of its finances.

The sweep dismantled some of the most powerful families in the organization, Italian news agencies said. It also enabled investigators to shed light on the 'ndrangheta structure and power hierarchy.

The biggest operation was in the Milan region of Lombardy, where 160 people were reportedly arrested. They included businessmen and the director of state medical services in the city of Pavia.

The last big operation against the Calabrian mob dates to the 1990s. Since then it has expanded its power, not only in Italy but in such countries as Germany.

A clan war spread to Germany in 2007, when six Italians were gunned down by a rival gang in retribution for an earlier killing as they left a birthday celebration in the western city of Duisburg. Italian officials have said all three people responsible for the shooting have been arrested.

Anti-mafia prosecutors say Milan has become the economic center for the organization, which migrated to the north in the 1970s and 1980s. Nearly all of the clans are present in Lombardy.

Prosecutors say wiretaps are key to investigating hard-to-infiltrate mafia clans, and have complained bitterly against a proposed new bill that aims to limit the use of electronic eavesdropping. Premier Silvio Berlusconi, who has been stung by some embarrassing disclosure in published transcripts of private conversations mostly unrelated to investigations, is pushing the measures through parliament.

While terrorism and mafia investigations are exempt from the proposed restrictions, magistrates complain that big probes often stem from low-level criminal cases. Passage of the law, they say, will give criminals operating in Italy protection.

The restrictions include a strict time limit on wiretaps, which prosecutors say is insufficient, and a level of proof needed to obtain permission to launch the wiretaps that investigators charge is tantamount to evidence needed for a conviction.