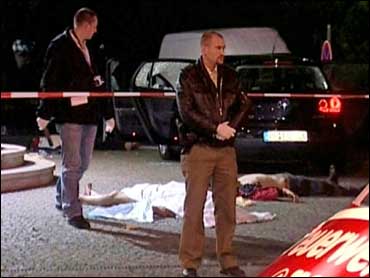 Six Italian men were fatally shot Wednesday in an execution-style killing that officials said appeared to be part of a long feud between two Italian organized crime clans.

The six victims were discovered before dawn with gunshot wounds to the head inside two vehicles near the western German city of Duisburg's main train station. One of the men died while being taken to a hospital, police spokesman Hermann-Josef Helmich said.

Helmich said the men were Italians between the ages of 16 and 39 but gave no other information on their identities.

In Rome, Interior Minister Giuliano Amato said the slayings apparently were part of a feud between two rival clans involved in the 'ndrangheta crime syndicate, a group similar to the Sicilian Mafia but based in Italy's southern Calabria region, and believed to be involved in drug and arms trafficking, extortion and other crimes.

The shootings were "an unprecedented settling of scores, also because it took place in a foreign country for the first time," Italy's ANSA news agency quoted the deputy head of the Regio Calabria police, Luigi De Sena, as saying.

Duisburg police said there had not previously been Italian organized crime activity in the city, located at the western end of the Ruhr industrial region.

"The presence of Calabrians in Germany is very strong, but until now they always kept a low profile, trying not to attract attention," De Sena said.

Duisburg police spokesman Reinhard Pape said stopped a police patrol car that happened to be in the area about 2 a.m. and reported hearing a bang, followed by a noise like fireworks.

About a half-hour later, police officers found the two vehicles, both of them German-registered.

The victims appear to have been unarmed. Numerous gun cartridges were found at the crime scene — about 100 yards from the train station, and close to an Italian restaurant.

"There must have been more than one person involved," Pape said.

Interpol said it had sent investigators from Rome to Duisburg to help with the probe.