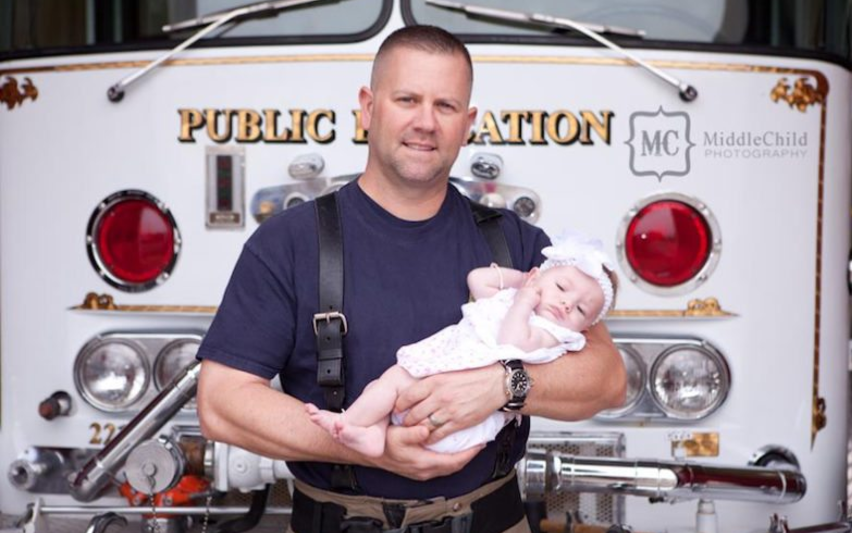 Firefighter Marc Hadden was working with the medical unit when he helped deliver the baby girl who would grow into the blonde-haired, blue-eyed daughter he now knows as “Gracie.”

It was a surprisingly slow day for one of the busiest fire stations in Myrtle Beach, South Carolina on November 11, 2011. Hadden had spent the day training and killing time cleaning engines.

When he finally sat down with his crew to eat dinner in the middle of his 24-hour shift, the phone rang — and he had to hop into an ambulance to make an emergency call. When he arrived on scene, he and his partner found a pregnant woman in labor. As soon as they helped her into the ambulance, she was ready to give birth.

It was the first time Hadden took charge during a delivery in his two decades of working.

“I was tasked with everything to do with Gracie,” Hadden told CBS News. “I helped her take her first breath.”

The team then called for backup and rushed to the hospital to drop off the mother and child. While filling out routine paperwork at the hospital, Hadden overheard nurses say the new mom requested the baby girl be put up for adoption “immediately.”

“Throw my name in the hat if this baby’s being put up for adoption,” Hadden said jokingly.

But he wasn’t actually kidding.

Due to medical complications, Hadden and his wife, Rebecca, weren’t able to have any more children after they had their second son.

“We checked into adopting, but it was way too expensive,” Hadden. “We prayed about it.”

The nurses turned to Hadden and said, “You need to go talk to this mom.”

Hesitantly, Hadden walked into the woman’s hospital room to introduce himself. He explained that he has two kids, his wife’s a school teacher and they want to have more children, but aren’t able to. After a friendly chat, Hadden swung by the nursery and sent his wife a picture of the smiley little girl.

She jokingly texted back, “Can we keep her?”

Exhausted, Hadden headed home to talk to his wife in person. They both agreed, it was worth trying. What did they have to lose?

The next day, Rebecca visited the woman in the hospital.

“With both of our boys, we had families, support and a ton of stuff,” Hadden said. “This mom didn’t. She had nothing. No family that was there.”

As Rebecca started to walk out of the hospital, a doctor stopped her in the hallway and said, “She’s ready to go forward with the adoption.”

Forty-eight hours later, the Haddens had their little girl, and in March 2012 the closed adoption that the girl’s birth mom requested was complete.

“It was meant to be,” Hadden said. “Everything that happened that day changed: my station, assignment, the location. So many things happened that made us 100 percent sure.”

The family named their baby girl Rebecca Grace Hadden; she goes by Gracie.

“The name Grace over the years has become extremely fitting for her,” Hadden said of the now 5-year-old. “She’s an awesome kid.”

The 5-year-old girl loves playing with her brothers and dressing up with her mom, but she especially loves hearing the story of how her “daddy” delivered her in the back of an ambulance.

“Our bond is extremely tight. She’s a part of the family, and we love her more than life,” Hadden said. “We wouldn’t change anything. We would do it all again if we could.”