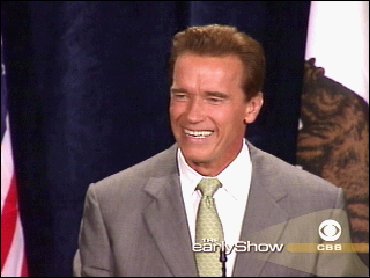 This is Gyles Brandreth - or, as I was described here last week on TV, "This is Britain's answer to Arnold Schwarzenegger." Yes, America, I kid you not.

I may not have the funny Austrian accent, or the thrilling triceps, to say nothing of the mega-bucks in the banks and the pencil-thin wife with Kennedy connections, but I am the nearest thing this country has to a show business politician.

I was in TV for years, and then I became an elected legislator - so this past week I have been filling the British airwaves with my top tips for Arnie.

Tip Number One: Enjoy your triumph. It's downhill all the way from here. Getting elected is the easy bit. Celebrity helps. You get the coverage. People know who you are. They vote for a name they recognize.

Tip Number Two: You've been in heaven, get ready for hell. The electorate now feels they own you. Because you're more recognizable than the average politician, you're also more accessible - and more accountable. There is no aspect of your life - past, present or to come - that isn't up for scrutiny.

Tip Number Three: Handle the little people tenderly. Compared with you, everybody is small, of course, but that's not how they see themselves. The other elected members and the state officials may be gracious to your face, but, let me tell you, they hate you - they resent you - they envy you. It has taken them years to struggle through the system. You've done it in a single leap. Assuage their envy, charm them out of their jealousy - be humble with them in the hope that will try to help you and not subvert you.

Tip Number Four: Pace yourself. When I was first elected I went crazy - I went everywhere - did everything - visiting every school, opening every shopping mall. Big mistake. Fame is like caviar - best served in occasional dollops, not spread thinly everywhere. Even the biggest movies, the hottest TV shows, wear thin if they get too many airings. Stay special.

Tip Number Five: Stay who you are. When I joined the British Government, I tried to behave like other government ministers. It didn't ring true. Don't pretend to be what you're not; don't pretend to understand more than you do. Be yourself - they can't argue with that.

And, finally, Arnie, don't tear up your Actors' Equity ticket. Enjoy the ride as best you can - but take it from me, politics isn't like show business: the money's lousy, you don't get a Winnebago, the critics never like you, you don't get script approval and the story almost always end in tears. Look at me now.