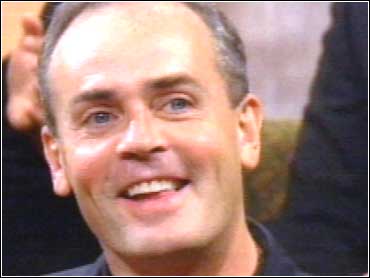 Hatch went to the Newport County Courthouse on Tuesday to seek a restraining order against Glenn Boyanowski. While there, Hatch learned there was a warrant out for his arrest, so he turned himself in, said Hatch's attorney, Christopher Behan.

Hatch was released on $1,000 personal recognizance. Hatch, who is gay, also was granted a temporary restraining order against Boyanowski.

"He's taking it in stride," Behan said. "He's extremely disappointed, but I think he realizes that this guy is trying to take advantage of him."

Boyanowski told The Providence Journal in Wednesday's editions that "my version of the story is different than his." He would not elaborate.

Boyanowski has an unpublished phone number and could not be reached for comment Tuesday by The Associated Press.

Police would release few details of the incident, but Behan said it happened Monday on the front steps of Hatch's Middletown home.

He said the man drove up Hatch's driveway and ran up the front steps, trying to get into the house. Hatch was on the step and pushed the man away when he tried to force his way inside, Behan said. He said Hatch had previously told the man to stay away from his home.

"Richard's big mistake is he should have called police right off the bat," Behan said.

Hatch was arrested in April 2000 on a charge of abusing his then 9-year-old son by allegedly grabbing him and forcing him to exercise. That charge was later dropped.

Hatch's next court appearance is Sept. 7.