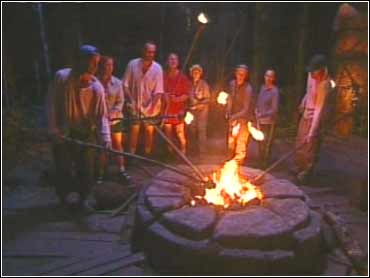 Kindly Sonja Christopher, a 60-ish musician who proved not quite as spry as her fellow Survivor castaways was sent packing at the end of the CBS reality series' premiere Wednesday night.

"Go get 'em, you guys," she said after being voted out, gracious even in exile.

That left 15 in this endurance contest, which was staged on a primitive island off Borneo in the China Sea and is being aired by CBS in a survival effort against ABC's smash quiz Who Wants to be a Millionaire.

By this summer's 13th installment, just one survivor will remain and be $1 million richer. And maybe CBS will have itself a hit.

Not if Joel Stein, a columnist for Time magazine, is typical of viewers. He called the show a good example of how a television network can spoil a good idea.

"A great idea, three people on an island and let them fight," he said on the CBS Early Show. "but instead, they set up all these fake games and this host on top of everyone all the time."

Asked whether he thought it mirrored reality, he said, "It mirrored the real world except they set up phony premises and fake tribal names. I thought they should throw the host off first."

Anthropologist Helen Fisher said viewers watched because " we want to know how we would do in this or the of situation."

"We spend our lives trying to get along with people so we can keep our jobs, keep our marriages together, so that we can raise ou rkids properly," she said. "We're constantly measuring ourselves to see if we can win. It's human to see if we can survive. Here's a real life situation."

She compared the tribal vote to kick one participant off the island with ostracism and said, "Throughout evolution, ostracism was death indeed. Last night, that was well-represented, the way the woman walked away, almost into the unknown. It rings true to humanity."

Their choice of Christopher was interesting as well, Fisher said. "They voted off a person who was the weakest, not the person -- the woman was a sweet, wonderful woman that they voted off. But they voted her off because she couldn't pull her weight, literally. It came back to that human craving to survive. And they voted off a human being who they thought would be detrimental to their personal survival."

Christopher told CBS News' Early Show that she realized her chances were in jeopardy when she fell.

"I felt it really cost us that immunity challenge," she said. "I was prepared to— I felt that was only justice, that I should go. I really did."

But her big mistake appeared to be pointing that out to her teammates.

"I asked a teammate last night - we had a reunion. I said, 'Would I have been voted off if I hadn't fallen?' He said no. I don't know, but that's what happened."

Among the things that she learned about herself, Christopher said, was that she was rather naive.

"I wnt there with certain ideas about how we might play this as a team and that sportsmanship was important, having done sports in the past. I learned that not everybody thinks that way."

She said she wasn't fully aware of the rigors of the experience — until she returned to civilization.

"I realized it had been pretty grueling and I had some injuries that needed looking after," she said. "My knee had swollen up. I had to have that drained and get some medical attention there."

The injury was actually a reinjury, she said. She first hurt her leg years ago when she was a competitive tennis player and damaged it again in a fall on the China Sea Island.

Meanwhile, the first-night Survivor audience need not fret over Christopher's banishment. Next week (which will cover another three days in the 39-day ordeal taped earlier this year), viewers will find the other characters marooned right where they left them.

Among the carefully selected "tribesmen," truck driver Susan will likely still be squabbling with Richard, a corporate trainer. And Rudy, a retired Navy SEAL, should still be bossing everyone.

"If they listened to me," Rudy told the camera on the first show, "they'd all have haircuts. We'd be in formation in the morning."

Then, next week, the next person will be voted out at a torch-lit tribal council. And then there will be 14.

After months of buildup, Survivor may surprise viewers by resisting the salacious or even sinister tone some were expecting. With the motto "Outwit, Outplay, Outlast," the show focuses on roughing it in beautiful surroundings and on interpersonal gamesmanship.

The diverse group (which is split into two rival camps) harbors distinct personalities that, if not always likable, are generally involving. A few, like biochemist Ramona and Sean, the doctor with a nipple ring, are also easy on the eyes.

One contestant more interesting than the show's producers might have preferred is Richard Hatch. Last month, he pleaded innocent to allegations he abused his 9-year-old son. The boy said he was forced to go running and his father wrapped his hands around his neck to move him along when he tired.

The actual winner, whose identity CBS is jealously guarding, is yet to be uncovered.