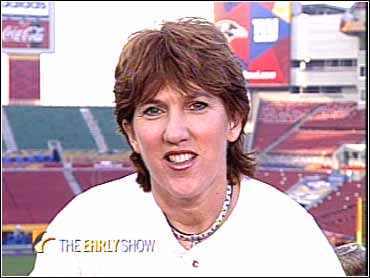 The day after the premiere of Survivor: The Australian Outback, The Early Show got the scoop from Debb Eaton, the 45-year-old corrections officer who became the first castaway to be booted out of the outback. Also visiting the program was Richard Hatch, who won the first Survivor competition.

She sums up her mistakes by saying, "I didn't fit in... I was my own worst enemy."

Still, she adds, "This was the best experience of my life."

Debb's ouster came as no surprise to Hatch, who had predicted she would be the first to go.

"She was somewhat rigid, and her focus was on physical strength and mental strength, and that's not the game," he told Co-Anchor Jane Clayson.

Who looks most promising? Hatch says it's Colby Donaldson, the contestant who took a Texas state flag as his luxury item. "He is that stunning man from Texas," Hatch adds. "They put something in the water in Texas, I'm telling you."

He also mentions Jeff Varner (the guy who kept getting sick) and Rodger Bingham (the 53-year-old teacher from Kentucky) as possible winners. Of Jeff, Hatch says, "He got sick, but he handled it well."

Also commenting on Survivor, Fred Thomas, one of the "Whassup?" guys, says he thinks Rodger reminds him of Richard, because of "his demeanor and how he was going about trying to unite everybody."

About half way through the first Survivor episode, you could tell things weren't going well for Debb.

From day one, the 45-year-old Kucha tribe member didn't get along with Kimmi, the bartender from New York. Kimmi complained that Debb was too independent. But Debb tells The Early Show that she and Kimmi have talked since then, and "everything is cool" between them.

Physically, Debb was up to the challenge. Befre the show, she was a guard at a men's prison in New Hampshire. But getting along with inmates was apparently easier for Debb than getting along with her tribe mates. And her newfound fame has been a mixed blessing. The supermarket tabloids are full of stories about her romantic relationship with her stepson, Bob.

Debb was married for 20 years before her husband died. She says she never had a mother/child relationship with Bob, and they grew close after his marriage ended and his father (Debb's husband) died.

"You don't choose who you fall in love with," she tells Gumbel, adding that she considers such love and commitment "a gift from God. No one's ever going to make me feel bad about that."

Not even the outcome of her stint on Survivor bothers her much any more, although she admits she dislikes being known as the first one kicked off the show. The 16 scheming strangers were disgorged from a military cargo plane into an isolated, snake-infested patch of land in northeastern Australia.

Debb's team, the Kucha tribe, badly lost an immunity challenge to their opponents, the Ogakor tribe. Both teams had to cross three portions of a river carrying a torch to light a bonfire.

No one ate rats, as in the first game, but the second Survivor had its own gross-out factor: One contestant bit into a fig and quickly spit it out after finding it was infested with bugs.

The game was a television phenomenon last summer, with 51 million people watching on Aug. 23 as Hatch outlasted his fellow contestants to win a $1 million prize.

CBS said the preliminary Nielsen Media Research ratings for Survivor: The Australian Outback might have been even higher if the Super Bowl's second half had been more competitive and the game show had started earlier than 10:17 p.m. on the East Coast.
Ratings were higher in the West, where it started three hours earlier.

The 42 million viewership figure would make Survivor te second most-watched show to air after the Super Bowl in the past 20 years. NBC aired a Friends episode in 1996 that drew just under 53 million viewers, Nielsen said.

The preliminary viewership figure was based on an overnight sample of 47 cities.

Now Survivor will settle in to a regular time slot on Thursdays at 8 p.m.