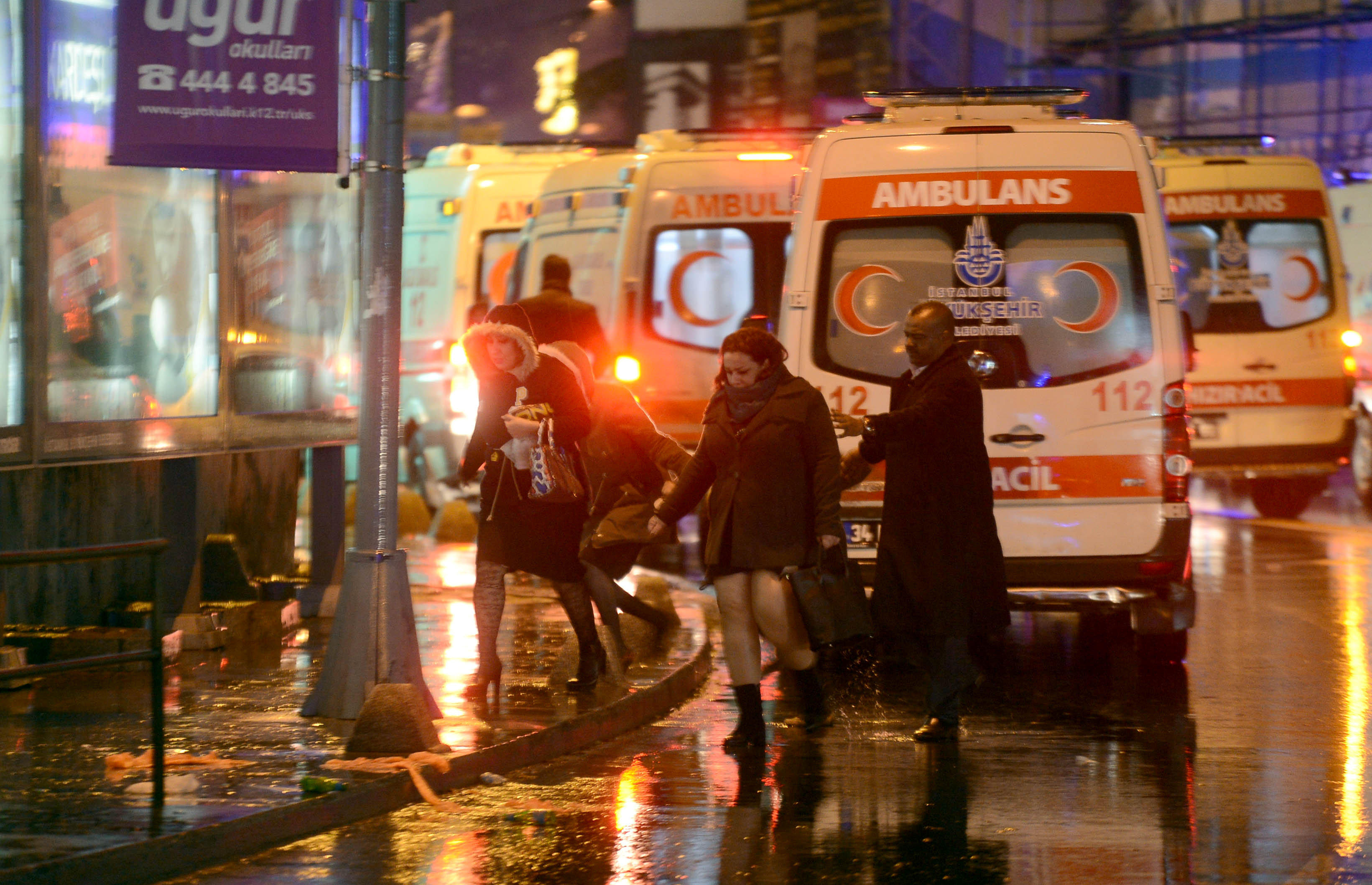 ISTANBUL-- An assailant believed to have been dressed in a Santa Claus costume opened fire at a nightclub in Istanbul during New Year’s celebrations early Sunday, killing an estimated 39 people and wounding dozens others in what the city’s governor described as a terror attack.

Gov. Vasip Sahin said the attacker, armed with a long-barreled weapon, killed a policeman and a civilian outside the club before entering and firing on people partying inside. He did not say who may have carried out what he called a “terror attack.”

Turkish Interior Minister Suleyman Soylu has raised the death toll in the Istanbul nightclub attack to 39.

The minister said Sunday that of the victims identified so far 15 were foreign nationals. He did not provide any information on their countries.

Soylu said that of the five Turkish fatalities identified so far, three or four were believed to be employees working at the club.

He says: “This was a massacre, a truly inhuman savagery.”

Interior Minister Recep Akdag also said that four of the injured were in “very serious condition” and the wounded also included several foreigners.

Soylu said the attacker was still at large and that 69 people were being treated in hospitals following the shooting.

“Unfortunately (he) rained bullets in a very cruel and merciless way on innocent people who were there to celebrate New Year’s and have fun,” Sahin told reporters.

Media reports said the assailant entered the Reina nightclub, in Istanbul’s Ortakoy district, at 1:45 am, dressed in a Santa Claus costume.

Some customers jumped into the waters of the Bosporus to escape the attack, the report said. NTV television said some of the wounded were foreign nationals, without citing their nationalities.

The whereabouts of the assailant was not known and it was not clear if he had been caught.

Sinem Uyanik was inside the club with her husband who was wounded in the attack.

“Before I could understand what was happening, my husband fell on top me,” she said outside Istanbul’s Sisli Etfal Hospital. “I had to lift several bodies from top of me before I could get out. It was frightening.” Her husband was not in serious condition despite sustaining three wounds.

Police in riot gear and machine guns backed up by armored vehicle blocked the area close to the Reina night club, one of the most popular night spots in Istanbul in heavy rain. Several ambulances flashing blue lights arrived on the scene, some taking wounded to Istanbul hospitals.

The attack occurred shortly after midnight in the club where an estimated 600 people celebrated New Year’s eve. Several shocked revelers were seen fleeing the scene after the attack and the music fell silent.

Justice Minister Bekir Bozdag vowed that Turkey would press ahead with its fight against violent groups.

“Turkey will continue its determined and effective combat to root out terror,” Bozdag said on Twitter.

The club is located close to recent suicide attacks that killed dozens near a soccer stadium.

Security measures had been heightened in major Turkish cities, with police barring traffic leading up to key squares in Istanbul and the capital Ankara. In Istanbul, 17,000 police officers were put on duty, some camouflaged as Santa Claus and others as street vendors, state news agency Anadolu reported.

Ankara and Istanbul have been targeted by several attacks in 2016 carried out by the Islamic State group or Kurdish rebels, killing more than 180 people.

U.S. President Obama expressed condolences on Saturday for the attack at a night club in Istanbul and directed his team to offer U.S. help to Turkish authorities, the White House said.

“This afternoon the president was briefed by his national security team on the attack in Istanbul,” White House spokesman Eric Schultz said in a statement. “The president expressed condolences for the innocent lives lost, directed his team to offer appropriate assistance to the Turkish authorities, as necessary, and keep him updated as warranted.”

A handful of WNBA players, including Essence Carson, Chelsea Gray and Jantel Lavender of the Los Angeles Sparks, were next door to the deadly shooting at a nightclub in Istanbul.

Sparks coach Brian Agler confirmed to The Associated Press that Carson had texted him that the three players were OK.

Carson had tweeted earlier in the evening that she was “stuck inside of the club because of ‘terror’ shooting in Istanbul. Praises to the most high.”

About two dozen WNBA players are in Turkey during their offseason playing in a league there.