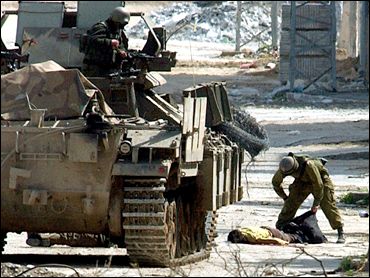 Israel's week-old military offensive against Islamic militants in the Gaza Strip intensified Sunday, and six Palestinians were killed and 28 wounded in a raid on a Palestinian town from which homemade rockets have been fired at Israeli communities.

Two more Palestinians and an Israeli soldier were killed elsewhere in Gaza.

In response to Sunday's army assault, Hamas militants fired three more short-range Qassam rockets from Beit Hanoun, and one hit near a strip mall in the Israeli town of Sderot, about 700 yards away. The rocket caused some panic but no injuries.

Israeli Defense Minister Shaul Mofaz said the military would maintain "relentless" pressure on Islamic militants in Gaza to halt the rocket fire. The offensive began Feb. 17, a day after a Hamas attack on an Israeli tank killed four soldiers in Gaza. Since then, 32 Palestinians and an Israeli soldier have been killed in Gaza.

In Israel, Prime Minister Ariel Sharon moved closer to establishing a new government as he signed up his first coalition partner — the National Religious Party that opposes Palestinian statehood and advocates Jewish settlement expansion in the West Bank and Gaza Strip.

With the NRP as an ally, it appeared unlikely Sharon would freeze settlement construction, a key requirement of a U.S.-backed "road map" to Palestinian statehood by 2005. The coalition deal also appeared to have ended Sharon's efforts of bringing in the moderate Labor party, which was trounced in a Jan. 28 election.

A third party, the secular Shinui, also is expected to join a Sharon-led coalition, giving him a slim 61-seat majority in the 120-member parliament.

The army raid of Beit Hanoun began before dawn Sunday and troops were still there after nightfall.

In the past 29 months of fighting, soldiers repeatedly entered Gaza towns and cities but usually withdrew after a few hours. Beit Hanoun has been targeted 10 times so far, and troops once remained for three days. By contrast, Israel reoccupied all but one West Bank town in the summer.

Brig. Gen. Zvika Fogel, an area commander, refused to say how long the military operation in Beit Hanoun would last. "We will end it when we have achieved our objectives," he told Israel TV.

In Beit Hanoun, soldiers blew up the homes of five suspected Islamic militants on Sunday. When soldiers approached one of the targeted buildings, home to followers of the militant Islamic Jihad, residents hurled hand grenades and opened fire — the first incident of armed resistance to a house demolition. The residents surrendered after four hours, and soldiers blew up the house.

Throughout the day, troops exchanged fire with small groups of masked gunmen in camouflage dress and fired from tank-mounted machine guns toward dozens of stone-throwers, including children and teens.

In all, six Palestinians were killed in Beit Hanoun, including two stone throwers, ages 17 and 20, a farmer and a policeman who had participated in a gun battle.

Two border guards were found dead near their post, hospital doctors said. Both had knife marks, besides bullet wounds, and one had no eyeballs, the doctors said, suggesting the corpses had been mutilated.

Capt. Sharon Feingold, an Israeli army spokeswoman, denied the charges. "We target Palestinians who target our soldiers, and we use various means to do this," she said. "I reject any allegations that the bodies were mutilated."

An army officer, speaking on condition of anonymity, said the military used a flechette shell to kill the two, referring to a shell that explodes into thousands of lethal darts.

Twenty-eight Palestinians were wounded in the fighting, three of them seriously, doctors said.

Several hours after the Israeli incursion, Hamas fired three Qassam rockets from Beit Hanoun. One fell near a strip mall in Sderot. Mark Yosef, a maintenance worker across the street at city hall, said dozens of shoppers rushed to the parking lot after hearing the boom.

Mofaz told the weekly Cabinet meeting Sunday that he ordered the military to make every effort to stop the rocket fire, according to a Cabinet statement. Mofaz "emphasized that Hamas in Gaza has suffered a string of painful blows this week and spoke of Israel's intention to keep up the relentless pressure on the Hamas infrastructure," the statement said.

In southern Gaza, meanwhile, an Israeli soldier was killed by a Palestinian sniper near the Khan Younis refugee camp, the army said.

Later in the day, a 16-year-old Palestinian boy was killed and a 14-year-old wounded by Israeli tank fire toward Khan Younis, Palestinian doctors said, adding that the two boys had been playing soccer.

The Israeli military said soldiers were shooting toward armed men in the area and it was unaware of casualties.

Also Sunday, an armed Palestinian was killed in a gunfight with Israeli troops near the Jewish settlement of Netzarim. The army said the gunman had approached the settlement and opened fire on troops guarding the area. He was found with an assault rifle and four grenades, the army said.

In the West Bank, a Palestinian laborer was shot and killed by Israeli border police near the town of Tulkarem, doctors said. The body was handed to Palestinian officials without explanation. The army had no immediate comment.

Also Sunday, troops withdrew from the center of the West Bank city of Nablus following four days of intensive searches. At least seven people died during clashes in Nablus. A 14-year-old, who was critically wounded on Saturday, died early Sunday.