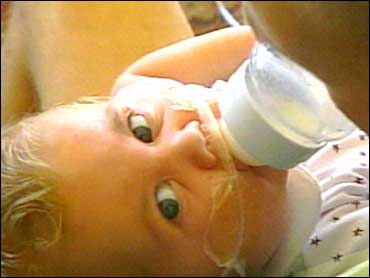 The Israeli Mossad and Shin Bet secret service agencies have joined the investigation of a faulty baby formula that has been linked to the deaths of three infants, an Israeli newspaper said Monday.

The kosher formula, made for Remedia by the German company Humana Milchunion, does not contain Vitamin B1, even though the package said the product included the essential nutrient.

It is also sold in the United States to ultra-Orthodox Jewish families, and has been taken off shelves in heavily Orthodox Jewish neighborhoods in New York. The Israeli newspaper Yediot Ahronot reported Monday that a baby who had been fed the milk substitute was in serious condition in a Boston hospital.

The head of the Israeli health ministry, Boaz Lev, raised the possibility of sabotage to the kosher soy-based milk substitute, saying "it is impossible to know if this is intentional or not."

A Health Ministry spokesman, after originally indicating that the report in the Haaretz daily was true, later refused to confirm it. "All the factors that deal with the inquiry of this type and scope are doing their jobs," spokesman Robbie Steinberg said. Asked if the two security agencies were involved, he said, "I have no clear knowledge of that and I have no comment."

Two lawsuits were filed against Remedia on Monday, seeking more than $222 million in damages, Haaretz said.

The Health Ministry believes that some 5,000 children have consumed the product during the past six months.

Neither company has yet explained why Vitamin B1 was listed as an ingredient or why it wasn't included in the milk substitute.

Humana is conducting its own investigation with German officials, and American food giant H.J. Heinz Co., which owns 51 percent of Remedia, has offered its assistance. Humana said Monday that results of initial tests it had conducted showed that the formula did contain Vitamin B1. The discrepancy between the Israeli and German tests was not explained.

Israeli health experts were scheduled to fly to Germany to visit the plant where the Remedia formula is produced.

"We will compare and discuss test results with the Israeli authorities in order to contribute actively toward clearing up the issue," Humana said in a statement.

Remedia said Sunday that it had slightly altered the makeup of the formula several months ago because of new scientific developments. A Remedia official has hinted at sabotage, the Yediot Ahronot daily reported.

Vitamin B1, also known as thiamin, is vital for development of the nervous system in babies. Health Ministry officials say more than 20 infants suffered from a disorder caused by a deficiency in the vitamin after drinking the formula, and three have died.

After determining the formula did not contain the vitamin, the Health Ministry called for all infants who had been fed the soy drink for extended periods to be checked by a doctor and given thiamin shots.

The Health Ministry, which recalled the soy drink on Friday, is considering recalling all Remedia products, Steinberg said. The ministry may also take legal action against the company, he added.