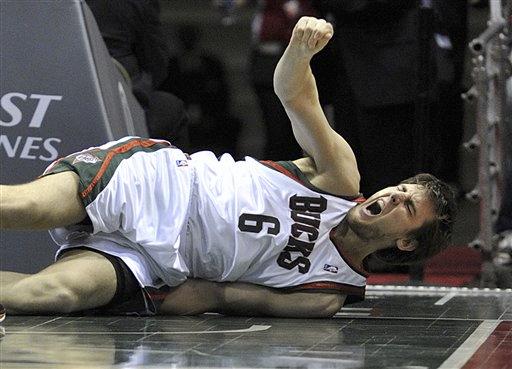 Israeli prison officials are considering psychological means, including jailhouse cookouts, to break up a hunger strike declared by hundreds of Palestinian prisoners, a spokesman said Monday.

About 1,600 prisoners began the strike on Sunday, demanding an improvement in their conditions. Organizers said the rest of the 7,500 detainees would join the protest by the end of the week.

Israeli officials countered by imposing new sanctions on the prisoners. As the protest continued into its second day Monday, prisons spokesman Ofer Lefler said authorities were considering grilling meats near the prisoners, hoping the enticing aroma would weaken their resolve.

"We look at psychological means to deal with problems like this," Lefler said, saying the tactic has been used in other parts of the world. "Our interest is to return prisoners to eating as soon as possible." He said no decision had been made on whether to begin the threatened cookouts.

Israeli military sources, speaking on condition of anonymity, said soldiers spotted militants setting up a rocket launcher, and the helicopters targeted them, hitting one.

They said the 29-year-old man was shot in the head when he climbed on the roof of his home during a curfew. The Israeli army had no immediate comment.

The hunger strikers are pressing for greater access to phones, an end to strip searches and more family visits. Many prisoners have not seen their families because an Israeli security closure bars Palestinians from Israel. Prisoners also complain of poor sanitary conditions.

In the past four years, Israeli troops have rounded up thousands of Palestinians on suspicion they were involved in attacks that have killed nearly 1,000 Israelis.

The issue of prisoners is especially sensitive to Palestinians, many of whom have relatives or friends who have been imprisoned by Israel. On Monday, Palestinian officials declared a day of solidarity with the prisoners.

About 3,000 protesters waving Palestinian flags and posters of imprisoned relatives demonstrated in Gaza City, shouting anti-Israel slogans and pressing for the prisoners' release. A group of children wore chains on their hands in a symbolic show of solidarity.

"We are sending a message to our prisoners that we are not going to spare any effort to release you," said Khadeer Habib, a spokesman for the Islamic Jihad militant group.

Abu Mohammed, a spokesman for the Al Aqsa Martyrs' Brigades, said his group planned to kidnap Israeli soldiers to exchange for Palestinian prisoners. Palestinian militants have made similar threats in the past.

As the hunger strike began Sunday, the most prominent Palestinian prisoner was working on a smooth transition in the Gaza Strip after Israel's planned withdrawal next year, according to a document obtained Sunday by The Associated Press.

The document shows that Marwan Barghouti, a leader of Yasser Arafat's Fatah movement, has presented an 18-point plan for Gaza to the militant groups Hamas and Islamic Jihad.

A source close to Barghouti said the groups had responded "positively, in principle" to the plan, under which the militants would halt attacks on Israel from Gaza in exchange for a role in running the area.

Islamic Jihad spokesman Mohammed al-Hindi, however, said Monday the group had not received the document or had any contact with Barghouti.

Al-Hindi said he suspected the report had been fabricated by Israel "to measure the reactions of the Palestinian factions regarding important items, including our holy right to fight the occupation."

There was no immediate reaction from Hamas.

Since Israel announced its pullout plan, concerns have been raised about a power vacuum and a possible takeover by Islamic militants.

Under Barghouti's plan, Arafat's Palestinian Authority would be the ruler in Gaza, but a "monitoring committee" with representatives from all groups would have considerable say.

Barghouti, seen as a possible successor to Arafat, is serving five consecutive life terms for a role in attacks that killed five people, but is frequently mentioned in reports about possible prisoner exchanges.

Barghouti is taking part in the hunger strike, his daughter Aruba told the AP.

The strike was organized by the main Palestinian factions — Hamas, Islamic Jihad and Fatah.

Israeli officials reacted by imposing additional sanctions — including banning all family visits and the sale of cigarettes and candy.

Israeli Public Security Minister Tzachi Hanegbi said over the weekend that Israel would not give in to the prisoners' demands.

In staging a hunger strike, Palestinian prisoners are adopting a tactic used with some success by Irish republican activists jailed by the United Kingdom.

In 1981, ten Irish prisoners starved themselves to death at Long Kesh prison to protest their being reclassified from political prisoners to criminal detainees.

Prisoners in Turkey staged hunger strikes with deadly results in both 1996 and 2001.