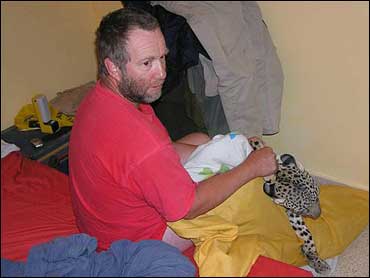 A man clad only in underwear and a T-shirt wrestled a wild leopard to the floor and pinned it for 20 minutes after the cat leapt through a window of his home and hopped into bed with his sleeping family.

"This kind of thing doesn't happen every day," said 49-year-old Arthur du Mosch, a nature guide. "I don't know why I did it. I wasn't thinking, I just acted."

Raviv Shapira, who heads the southern district of the Israel Nature and Parks Protection Authority, said a half dozen leopards have been spotted recently near du Mosch's small community of Kibbutz Sde Boker in the Negev desert in southern Israel, although they rarely threaten humans.

Shapira said it was probably food that lured the big cat. Leopards living near humans are usually too old to hunt in the wild and resort to chasing down domestic dogs and cats for food, he added.

Du Mosch's pet cat ran into the bedroom, followed by the wild cat.

"The leopard was shaking Zehava (the cat), trying to break his neck. Either it was busy, or it just didn't give a damn about me, and didn't notice me approaching," du Mosch told Haaretz newspaper.

"I held him like that for about 20 minutes until the rangers arrived. In the meantime, I talked to him in Dutch. I have a way with animals," he added.

Shapira said the leopard was very weak when park rangers arrived at du Mosch's home after the surprise late-night visit. He said nature officials would likely release it back into the wild.

The cat weighed only about 44 pounds, very low for a male adult leopard. Veterinarians also found evidence of a degenerative joint disease.

Du Mosch said he probably would not have been able to control the big cat were it in better health. As a nature guide, he said, he was familiar with animals and did his best to hold down the leopard without harming it. He said he took it all in stride, "but the kids were excited."

His 15-year-old helped him hold the leopard down, while the 14-year-old took pictures.

The leopard may get a radio transmitter collar so officials can track him and alert Sde Boker residents if he returns.

At least 15 killed as inmates in a packed Ecuador prison go to war
Thanks for reading CBS NEWS.
Create your free account or log in
for more features.
View CBS News In
CBS News App Open
Chrome Safari Continue
Be the first to know
Get browser notifications for breaking news, live events, and exclusive reporting.