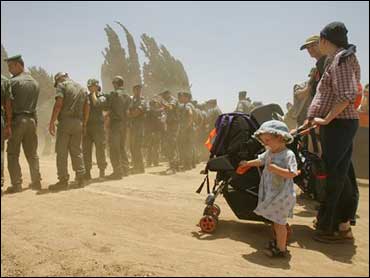 Israeli troops on Wednesday sealed off a cluster of Gaza Strip settlements marked for evacuation to stop the influx of hard-line opponents, the government's most sweeping measure yet to prepare for next month's pullout.

Settlers responded defiantly, threatening to block roads throughout Israel and to step up other protests.

Also Wednesday, Israeli troops reoccupied the northern West Bank town of Tulkarem in response to a suicide bombing that killed four Israeli women in the resort town of Netanya a day earlier.

A firefight between Israeli soldiers and Palestinian police in Tulkarem left one police officer dead and a second critically wounded. Soldiers arrested six people, including the father of the bomber.

In preparation for the pullout, Prime Minister Ariel Sharon ordered the settlements closed to all nonresidents. Residents would still be able to move in and out of the settlements freely, the army said.

Soldiers set up roadblocks at the Kissufim crossing into the Gush Katif cluster of settlements in Gaza to enforce the order, causing a traffic jam of settler cars, army trucks and police vehicles. The soldiers turned away anyone without a residence permit.

Some drivers argued, screaming at police that they had driven great distances to be there, but most left quietly.

"It's one of the most painful times, it's terrible," said Hana Picard, 48, a resident of Gush Katif.

In recent months, scores of pullout opponents moved into empty houses and tents in the settlements, and others were planning to march en masse into Gush Katif on Monday and remain there to resist the pullout.

"The (closure) decision was made because of the constant flow of extremists into Gaza in order to be there on D-Day and to try to sabotage the (pullout)," said Maj. Gen. Dan Harel, the regional Israeli army commander.

Settler leader Eran Sternberg called Sharon "a hooligan" and said he was "exploiting the army for a political decision."

Some settlers also criticized the government for ordering the closure a day after the deadly suicide bombing in Netanya shook a 5-month-old truce between Israel and the Palestinians.

In response to the bombing, Sharon ordered security forces to "hit the leadership of Islamic Jihad. We will not stop until they stop the terrorist murders," he said.

Early Wednesday, Israeli troops took control of the West Bank town of Tulkarem, declaring a curfew and conducting house-to-house searches in pursuit of the bombing's masterminds.

Israel handed Tulkarem to Palestinian control four months ago as part of a gradual Israeli withdrawal from West Bank cities. Israeli Cabinet ministers said Wednesday the process had been frozen.

The army's operation began early Wednesday when undercover troops stormed a Palestinian checkpoint, Palestinian security officials said. The police opened fire when they did not recognize the armed men dressed in civilian clothes as Israeli soldiers.

"The specific goal of this operation is to destroy the Palestinian Islamic Jihad infrastructure in Tulkarem and its surroundings," Brig. Gen. Yair Golan, a West Bank military commander, told Israel's Army Radio.

International pressure also grew on Palestinian leader Mahmoud Abbas to take action against Islamic Jihad. Abbas, who harshly condemned the bombing, has preferred to try to co-opt the militant groups, fearing a crackdown would spark a civil war.

In condemning the attack, Secretary of State Condoleezza Rice called on the Palestinian Authority to punish those responsible. "Now we must see actions that send a message that terror will not be tolerated," she said in a statement.

The bomber, 18-year-old Sami Abu Khalil, was from the village of Atil near Tulkarem. Atil is under full Israeli control, and Israeli officials acknowledged a failure by intelligence to detect the plot.