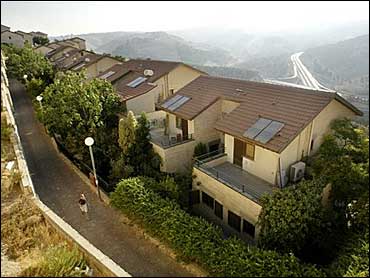 The mayor of a large Jewish settlement where new houses are being built said Wednesday that the community would double its size in the coming years despite strong American and Palestinian opposition.

The plan to add 600 housing units to the West Bank settlement of Maaleh Adumim near Jerusalem has brought charges from the U.S. that Israel is violating the road map peace plan, reports CBS News Correspondent Robert Berger.

"The Israelis are escalating the construction of the roads and the electricity and expanding the size of each settlement," Ahmed Qureia said after meeting U.S. Consul General David Pearce.

"It's also a flagrant violation of all promises made by this Israeli government to President Bush concerning the cessation of settlement activity," added Erekat.

The State Department has also criticized Israel about the project.

Qureia also said Israel was blocking his plan to put armed and uniformed police with marked police cars on the streets to help seize control from militants roaming freely with assault rifles.

"There is no security without an ability to control security, including whatever the security apparatus needs," Qureia said.

Meanwhile, Israeli tanks and bulldozers moved toward the packed Jebaliya refugee camp in the Gaza Strip on Wednesday, severing electricity and telephone lines in an operation to stop Palestinian rocket attacks, witnesses and Israeli officials said.

In the West Bank, a Palestinian bystander was killed by Israeli gunfire during a shootout with militants in Nablus, witnesses said. Three Palestinians also were wounded, rescue services said.

In the past, Israel has targeted Palestinian police stations, which it says have provided aid to militants fighting Israel. The Palestinians have charged that Israel destroyed the only infrastructure they had to control the militants.

Maaleh Adumim, the largest West Bank settlement with 31,000 people, is a satellite city of Jerusalem, located four miles east. Israel hopes to keep the community in any future peace deal with the Palestinians.

The mayor of the community, Benny Kashriel, said Wednesday that "thousands" of new homes would be built in the town. About 480 units of the 600 reported on this week have already been built, he told Israel Radio.

"The Americans and the Palestinians and the entire world know that Maaleh Adumim is continuing to build," Kashriel said. "The overall plan is to double the population and God willing, we will continue and we will succeed."

A spokesman for the Housing and Construction Ministry, Koby Bleich, said Wednesday that the government had granted permission for the 600 units a year ago.

"Tenders have already been issued and some crews are already working on the ground," Bleich said. "But we haven't issued any tenders in the past six months and we don't expect to issue any more in the near future."

Israel's ambassador to Washington, Daniel Ayalon, assured Assistant Secretary of State William Burns in a meeting on the matter on Tuesday that Israel would stand by its commitment to the road map.

The State Department, meanwhile, has updated its advisory warning against travel to the West Bank, Gaza and Israel following the kidnapping of a U.S. citizen last week in the West Bank town of Nablus.

Militants held the unidentified American and two European hostages for several hours Saturday before releasing them unharmed after negotiations with the Palestinian Authority.

In Gaza, a helicopter providing cover for Israeli troops outside Jebaliya fired a warning missile, wounding three Palestinians, witnesses and doctors said. It was not immediately clear whether the wounded were militants or civilians.

The move toward Jebaliya expanded Israel's monthlong operation in the town of Beit Hanoun in the northern Gaza Strip that began after two Israelis — including a 4-year-old boy — were killed by homemade rockets in Sderot, an Israeli town two miles from the Gaza perimeter fence.

A military spokesman said the army has no immediate intention of entering the refugee camp, where more than 100,000 Palestinians live, since no rockets were being fired from inside.

Despite the effort to push launching sites beyond the range of Sderot, the rocketing of the town has continued almost daily. The militant group Hamas warned on an Arab satellite TV channel Wednesday it will continue bombarding Sderot.

Bulldozers also went into action in the West Bank village of Azzoun Atmeh near Qalqilya, demolishing at least five houses or apartment blocks built without permits.

The village of 2,200 Palestinians is surrounded by Israel's separation barrier, and both gates to the village were locked during the operation, witnesses said.

Abdel Karib Ayoub, head of the local council, said some homeowners had appealed the demolition order to the Israeli courts, but their homes were destroyed before the court ruled.

The Israeli general heading the Gaza withdrawal plan says the evacuation of settlers will be completed by the end of September of 2005. All 21 Gaza settlements are slated for removal, along with four others in the West Bank. Under the plan, the army would complete the pullout from Gaza by the end of next year. Now Prime Minister Ariel Sharon is trying to form a moderate government that will approve the plan, after his hawkish coalition partners rejected it.