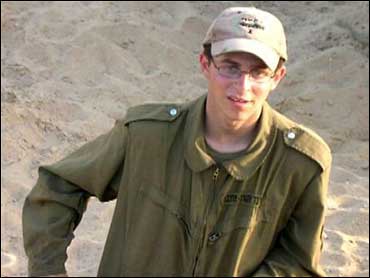 (AP)
On Monday, Damascus-based Hamas poured cold water on any imminent deal for the release of an Israeli soldier captured more than three years ago, saying it was still premature to trumpet a happy ending.

Talk of a possible deal has moved to center stage with Israeli media saying that a Hamas delegation was heading to Cairo to discuss the latest list of prisoners Israel is prepared to release in a swap for Israel Defense Forces soldier Gilad Shalit. Israeli President Shimon Peres heightened speculation after his talks with his Egyptian counterpart Hosni Mubarak in Cairo on Sunday, when he spoke of "real progress" in the negotiations.

"The brouhaha in the media talking about being close to reach an agreement on prisoner exchange deal is purely Israeli leaks designed to influence the feelings of our children, prisoners and their families and to try to pressure and influence on the process of indirect negotiations carried out through the German intermediary," a Hamas statement said. "Hamas will continue its efforts through the competent authority to overcome the obstacles set by the Israeli enemy in the way of completion of exchange … Although we hope to reach an honorable deal for our people as soon as possible, would like to emphasize that it is premature to talk about specific results … or close a deal."

Israeli newspapers said Hamas representatives had already crossed into Egypt from Gaza to meet the German mediator to debate a possible deal for the release of Shalit, captured by Hamas in a 2006 raid near the Israel-Gaza border. The militants tunneled into Israel and attacked an Israeli army outpost, killing two other soldiers.

A few times this year, indirect negotiations between Israel and Hamas seemed to be coming closer. So far, Israel's refusal to accede to Hamas' demand to release some prisoners, along with Hamas' tactical considerations with the Palestinian Authority, have blocked an agreement.

The German intermediary managed in early October to arrange the release of 20 Palestinian female prisoners in exchange for a minute-long "proof of life" tape video of Shalit.

Shalit's freedom has become a condition for the Israelis to consider ending a blockade of Gaza, which has economically wounded the Palestinian territory.

The United Nations recently issued a scathing report accusing Israel of war crimes during its military offensive in Gaza last winter. But it also called on the Palestinians to release Shalit on humanitarian grounds.

There has been speculation that a deal could be finalized to coincide with the Muslim holiday of Eid al-Adha, which falls on Friday.