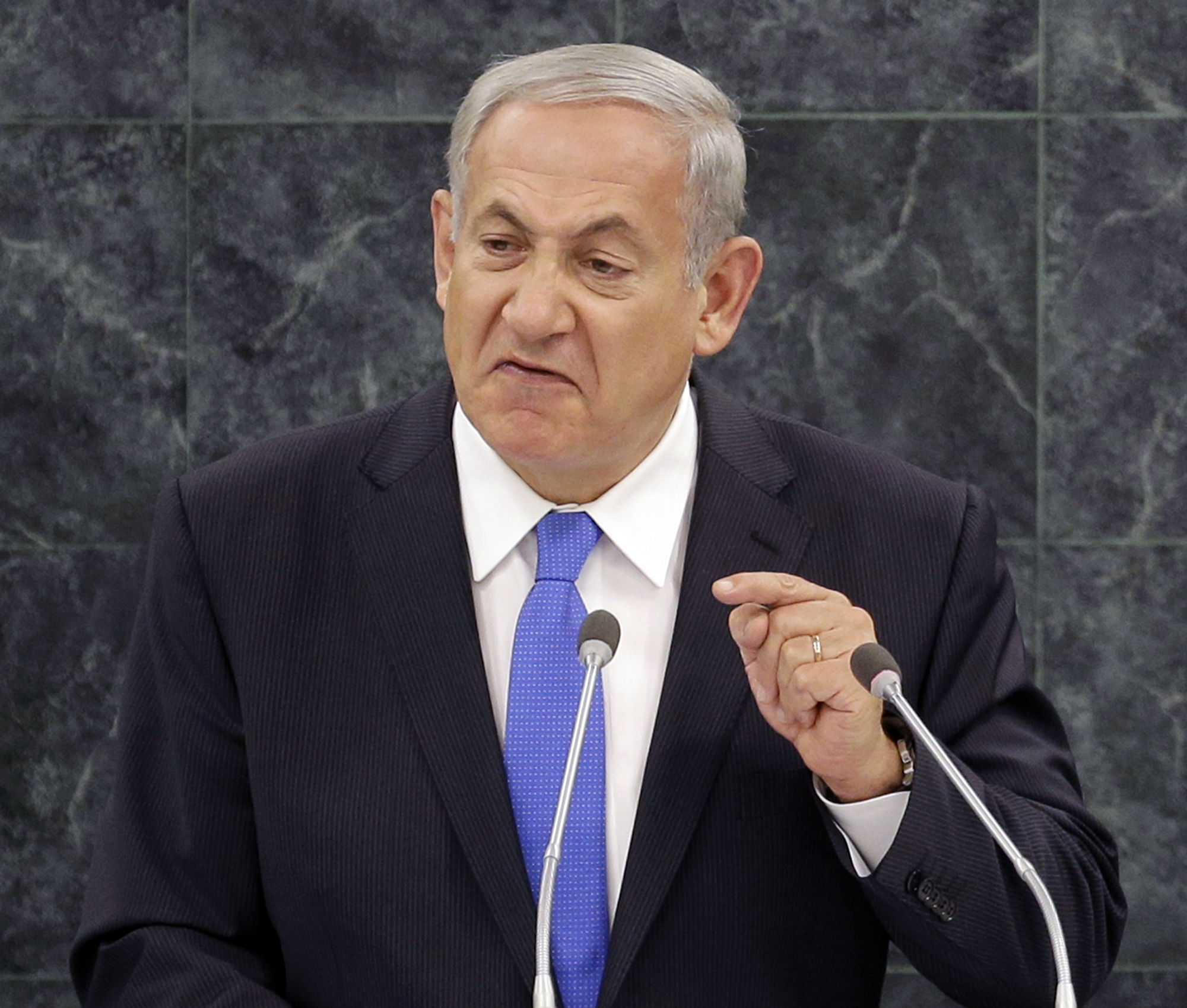 UNITED NATIONS Israel's prime minister declared Tuesday that his country will never allow Iran to get nuclear weapons, even if it has to act alone, and dismissed Iranian President Hassan Rouhani's "charm offensive" as a ruse to get relief from sanctions.

Benjamin Netanyahu told the U.N. General Assembly that Israel's future is threatened by a "nuclear-armed" Iran seeking its destruction and urged the international community to keep up pressure on Tehran through sanctions.

He called Rouhani "a loyal servant of the regime" and asserted that he must have known about the murder of 85 people in a terror attack on the Jewish Community Center in Buenos Aires and the killing of 19 American soldiers in Saudi Arabia in 1996 because he was head Iran's Supreme National Security Council from 1989-2003.

"Distrust between Israel and Iran runs deep, and Netanyahu in his U.N. address - the last of the General Assembly debate -- gave world leaders his advise on Iran's nuclear program: distrust, dismantle and verify," reports CBS News' Pamela Falk, from the U.N.

The U.S. has also accused Iran of sponsoring acts of terrorism around the world throughout the 1990s. Iran and its proxy Hezbollah were blamed for a 1992 attack on the Israeli Embassy in Buenos Aires, Argentina, that killed 29 people, and the attack on a Jewish community center there two years later.

Some analysts linked Iran's Quds Force to helping direct the 1996 bombings of the Khobar Towers in Saudi Arabia that killed 19 American military personnel.

Netanyahu said Rouhani condemned the "violent scourge of terrorism" and added: "Yet in the last three years alone, Iran has ordered, planned or perpetrated terrorist attacks in 25 countries on five continents," he charged, without providing any details.

Netanyahu accused Rouhani of masterminding Iran's strategy to advance the country's nuclear weapons program and said his goal was the same as his hard-line predecessor, Mahmoud Ahmadinejad.

"Ahmadinejad was a wolf in wolf's clothing. Rouhani is a wolf in sheep's clothing, a wolf who thinks he can pull the wool over the eyes of the international community," Netanyahu said.

He stressed that all Iranian presidents serve the same "unforgiving regime" where the supreme leader, Ayatollah Ali Khamenei, is a dictator and the real power.

Iran's U.N. Ambassador Mohammad Khazaee shot back: "Unlike Israel, Iran would not and did not attack any country."

"It is not due to its inability, but due to its principled policy in rejecting any use of force...," he told the assembly, exercising Iran's right of reply. "Therefore the Israeli prime minister had better not even think about attacking Iran let along planning for that."

Netanyahu also accused Iran of lamenting the human tragedy in Syria, but at the same time directly participating in President Bashar Assad's murder and massacre of tens of thousands of innocent men, women and children. He said Iran's regime is propping up the Syrian regime that just used chemical weapons against its own people.

Netanyahu took apart Rouhani's speech to the General Assembly last week, saying he wished he could believe the Iranian president's words "but we must focus on Iran's actions - and it's the brazen contrast, this extraordinary contradiction between Rouhani's words and Iran's actions that is so startling."

Netanyahu said Iran has not crossed the "red line" that he set at last year's General Assembly but claimed Rouhani has done nothing to stop the country's uranium enrichment program or its development of intercontinental ballistic missiles (ICBMs) "whose sole purpose is to deliver nuclear warheads."

"And Iran is building now ICBMs that the United States says could reach this city (New York) in three or four years," Netanyahu said.

CBS News' Falk said that at the White House Monday, Netanyahu appeared more muted about the diplomatic efforts that will begin next month, but at the U.N., Netanyahu made the point bluntly that Iran is developing nuclear weapons.

"He made the case for strengthening sanctions rather than lifting some, for what he called cosmetic changes, because the international community has Iran on the ropes, and it should not let up on the pressure," Falk said.

"Netanyahu said that Israel was prepared to compromise in order to forge an historic agreement with a demilitarized Palestine if it recognizes Israel s right to exist," Falk said.