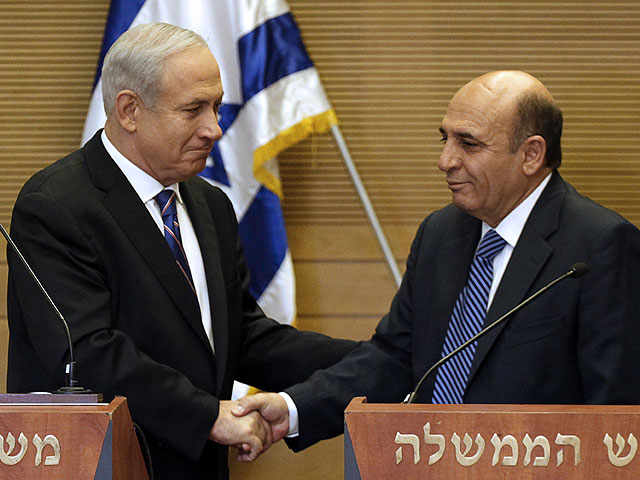 (CBS/AP) JERUSALEM - Israeli Prime Minister Benjamin Netanyahu unveiled a revamped coalition government on Tuesday, forming a broad alliance with the chief opposition party that could free his hand to take action on peace with the Palestinians and decide whether to attack Iran.

In a stunning reversal, Netanyahu called off plans to hold early parliamentary elections and struck an agreement with the rival Kadima Party. Netanyahu now presides over a coalition with 94 seats in the 120-member parliament, one of the broadest governments in Israeli history.

Netanyahu and Kadima's leader, Shaul Mofaz, appeared together at a midday news conference, saying their alliance would bring much-needed stability to Israeli politics. They expressed hope that long-stalled peace talks with the Palestinians would resume, though signs of differences on the Palestinian issue quickly surfaced.

Netanyahu has hinted that Israel would be prepared to strike Iran's nuclear program if it feels threatened. Mofaz, a former military chief and defense minister, has spoken out against an Israeli strike on Iran, though he has a history of reversing his positions on key matters.

Netanyahu said he and Mofaz already have had many discussions about Iran and will continue to hold talks on the matter. As a former military chief, Mofaz's opinion could carry great weight in a decision on whether to strike.

Netanyahu's current coalition, which had been remarkably stable since taking office in March 2009, has been riven by divisions in recent weeks over court orders to demolish two West Bank settlement outposts and to end draft exemptions for tens of thousands of ultra-Orthodox Jewish men.

Unable to bridge these differences, Netanyahu announced Monday he would push for early elections in September, more than a year ahead of schedule. But in an overnight deal that stunned the nation, he instead joined forces with Kadima, the largest party in parliament with 28 seats.

"I was ready to go to elections," Netanyahu said. "But when I learned that a very broad government can be established ... I realized that stability can be restored. That is why I have decided to form a broad national unity government."

Netanyahu said the new coalition would focus on four areas: ending the contentious draft exemptions; reforming the volatile political system, in which governments rarely serve their full four-year terms; protecting the economy, and promoting a "responsible" peace process with the Palestinians.

Peace talks have been stalled for more than three years over Israel's policy of building in settlements in the West Bank and east Jerusalem. The Palestinians, who claim both areas, have demanded a settlement freeze.

Netanyahu would not say whether he would now consider a settlement freeze. Instead, he repeated his calls for Palestinian President Mahmoud Abbas to return to negotiations without any preconditions.

"I hope that President Abbas will take advantage of this opportunity," he said.

Mofaz, however, said he would present new ideas to Netanyahu. Mofaz has suggested pursuing an interim arrangement with the Palestinians addressing border and security issues while a final deal can be reached.

News of the coalition deal stunned the nation, which had gone to sleep believing parliament was set to dissolve itself and clear the way for elections. The deal with Kadima was sealed in the middle of the night.

In recent days, Netanyahu had dropped hints something was in the works, repeatedly saying he hoped to form a stable, broad, centrist coalition. He would not say how long the sides had been negotiating.

Kadima had resisted joining the government when former Foreign Minister Tzipi Livni was at the party's helm, because she did not think Netanyahu was serious about reaching a peace deal with the Palestinians.

But after Mofaz ousted Livni in Kadima's leadership vote last month, the stage was set for a new alliance. Mofaz told the news conference that it had been a "mistake" to sit in the opposition.

While Netanyahu, who has surged in opinion polls, approached the negotiations from a position of strength, Mofaz is in a struggle for survival. Surveys have predicted the party would drop to about a dozen seats in parliament if elections were held. Beyond Mofaz's symbolic title of deputy prime minister, Kadima received little in exchange for its support.

The new deal gives Mofaz a year and a half to rehabilitate his party, or possibly merge it with Likud. Kadima broke away from Likud in 2005, and many of its members, including Mofaz, have their political roots in Likud.

Shelly Yachimovich, head of the opposition Labor Party, said she was furious over the last-minute reversal by Netanyahu and Mofaz.

"I feel revulsion, loathing, sick and tired and a sensation that a line has been crossed," she said, calling Mofaz a "bare-faced liar." Yachimovich is likely to emerge as parliament's new opposition leader.

The news also sidelines political newcomer Yair Lapid, a popular former TV anchorman who has been faring well in opinion polls. Lapid must now wait until the next election to enter parliament.