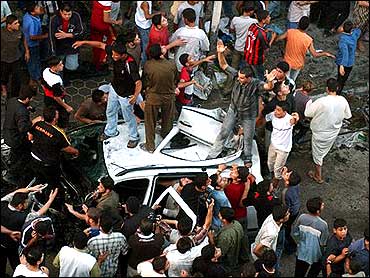 Israeli aircraft fired missiles at a car in the crowded Jebaliya refugee camp in northern Gaza on Tuesday, killing a teen, two children and wounding eight people, the military and hospital officials said.

The Israeli military said the car was carrying militants from the Al Aqsa martyrs' Brigades, affiliated with President Mahmoud Abbas' Fatah movement. Witnesses said the people in the car jumped out before the blast.

The car exploded on a narrow street in the crowded refugee camp. The front of the car was badly damaged, but the back was intact.

Hundreds of angry Palestinians gathered around the vehicle, shouting slogans. Khalil Roka, a cousin of the dead child, said he was sitting in front of his car repair shop while the children played in front of the house nearby. He said he saw a red flash as the car exploded, and the children were hit, but he didn't see the child who was killed. "I was carrying my other cousins to the ambulance," he said.

The army said it regretted any civilian casualties caused by the air strike.

An air strike last week killed eight civilians, in addition to the two militants it targeted.

About 100,000 Palestinians live in the Jebaliya camp, just north of Gaza City. Jebaliya is the largest refugee camp in Gaza. Most of its streets are unpaved, and housing is made up of small, concrete-block buildings. The poverty-stricken camp is a main breeding ground of militants.

Israel has often targeted Palestinian militants by firing missiles at their cars from aircraft.