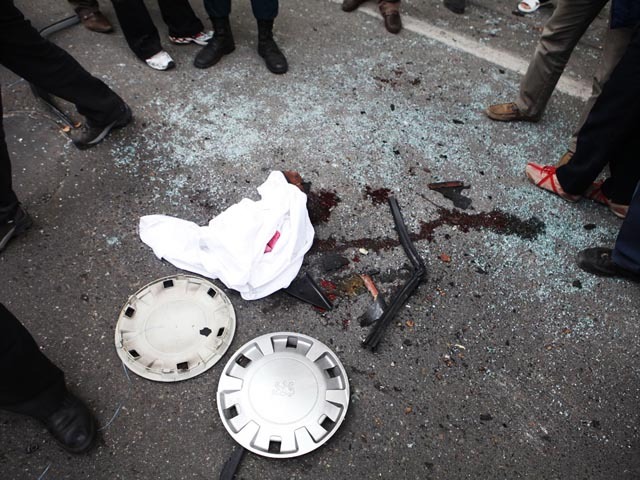 JERUSALEM - Israeli leaders typically greet word of violent setbacks to Iran's nuclear program with a wall of silence. Now a throwaway comment by Israel's military chief has hinted of possible Israeli involvement in attacks like the explosion that killed an Iranian nuclear scientist Wednesday.

The car bombing in Tehran was the latest in a string of murky mishaps for Iran's nuclear program caused by computer worms, explosions and assassinations of top experts. Israel, which has identified a nuclear Iran as an existential threat, is widely suspected of involvement.

The Israeli military leader told the Foreign Affairs and Defense Committee on Tuesday that "2012 is expected to be a critical year for Iran." He cited "the confluence of efforts to advance the nuclear program, internal leadership changes, continued international pressure and things that happen to it unnaturally."

Israeli officials in the past have spoken somewhat giddily of the "unnatural" setbacks that have plagued Iran's nuclear program. The timing of Gantz's testimony, just hours before Wednesday's assassination, was perhaps the strongest hint yet of Israeli involvement.

In a statement posted on Facebook, the chief military spokesman, Brig. Gen. Yoav Mordechai, said: "I don't know who settled the score with the Iranian scientist, but I certainly am not shedding a tear."

Hazhir Teimourian, an Iran expert at the Limehouse Group of Analysts in London, stressed it was impossible to be certain who carried out the attack. But he said Israel was a logical candidate.

"The Israelis really have the ability and the incentive," he said.

Israeli leaders have long warned that a nuclear-armed Iran would be an existential threat to the Jewish state. They cite Iranian President Mahmoud Ahmedinejad's frequent references to Israel's destruction, Iran's support for the anti-Israel Hezbollah and Hamas militant groups and its aggressive missile development program. Years of Iranian run-ins with the U.N. nuclear agency have only deepened those fears.

Iran says its program is for peaceful purposes, but the international community has rejected those claims, and the U.N. Security Council has imposed four sets of financial sanctions.

Prime Minister Benjamin Netanyahu routinely warns of the Iranian threat in his speeches, and he has even drawn parallels between the rise of Nazi Germany and the development of Iran's nuclear program. Netanyahu has toured European capitals to personally plead the case for tougher international sanctions against Iran, and Israeli leaders frequently hint at military action if sanctions fail by saying "all options are on the table."

Experts say that Iran has learned from these incidents, scattering its nuclear facilities throughout the country and burying key installations deep underground to help thwart a direct attack.

That has raised speculation that Israel and its Western allies would use covert means to disrupt the Iranian program.

One Israeli official said Israeli security chiefs believe covert activities are not a perfect solution. "They can impede, delay and threaten" the Iranians. "But it's not what will stop the program," he said. He spoke on condition of anonymity because he was sharing a classified security assessment.

He said Israeli leaders remain hopeful that international sanctions and diplomatic pressure will persuade Iran to abandon its nuclear program.

But security officials believe time is running out. They believe Iran will pass the technological threshold for producing nuclear weapons — the "point of no return" — later this year, and they will be able to develop an actual weapon within two or three years.

Iran accused Israel of carrying out Wednesday's killing of Mostafa Ahmadi Roshan, a chemistry expert and a director of the Natanz uranium enrichment facility in central Iran. The state news agency IRNA said Roshan, who died when two men on a motorcycle stuck a bomb to his car, had "organizational links" to Iran's nuclear agency, suggesting he was an important figure.

Iran has accused the Mossad, the CIA and Britain's spy agency of engaging in an underground campaign against nuclear-related targets, including at least three killings since early 2010.

Another key attack was the release of a malicious computer virus known at Stuxnet in 2010 that temporarily disrupted controls of some centrifuges — a key component in nuclear fuel production. All three countries have denied the accusations.

Ronen Bergman, an investigative journalist with the Yediot Ahronot daily and expert on Israeli intelligence affairs, said the Mossad has "for years" targeted enemies that include "nuclear proliferators."

"The outcome of such assassinations are the actual neutralization of the main scientists and the intimidation of those left behind," he said.