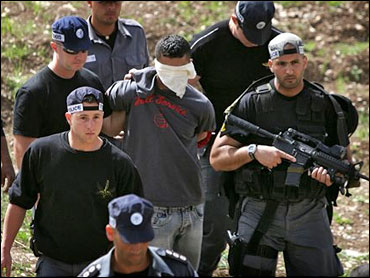 With sirens wailing and blue lights flashing, Israeli police chased a van with explosives on a main highway Tuesday and captured a group of Palestinians who, defense officials say, planned a major bombing ahead of national elections.

Israel's parliamentary election is set for March 28; Palestinian attacks have altered the outcome of past balloting.

After chasing down the bomber halfway from Jerusalem to Tel Aviv, jittery security forces extended a closure on the West Bank and Gaza through Election Day.

AP Television News video showed the 10 Palestinians removed from the van at gunpoint, stripped to their underwear, and forced to lie face down in a field next to the highway, arms extended. Sappers took away a 15-pound bomb, concealed in a bag.

Jerusalem police commander Ilan Franco said the suspected bomber had ties to the militant group Islamic Jihad. Authorities said he planned to blow himself up in central Israel, without pinpointing the location.

Islamic Jihad has been responsible for all seven such attacks during a yearlong cease-fire largely observed by others, including Hamas, the larger Islamic group. Hamas is forming a new government after sweeping Palestinian elections in January and has indicated it will continue the truce.

At midday Tuesday, a police helicopter flew in ever-tightening circles above the four-lane Jerusalem-Tel Aviv highway, looking for the blue van with the bomb.

Based on directions from the sky, police set up roadblocks on the heavily traveled highway, snarling traffic for miles.

The van was first seen in the hills near the suburb of Mevasseret Zion, and police joined the pursuit.

Elite police commandos with automatic weapons took part. Oz Eliasi, a police officer involved in the chase, said the van ran two roadblocks before it was stopped by police six miles past the Latrun junction, a main interchange.

Eliasi told Channel 2 TV that police initially forced the driver out of the van. Police then saw a Palestinian peeking out the rear window and realized there were passengers, he added.

"With guns drawn, we went to the back of the van and began removing everyone, laying them down on the ground," he said.

Bomb experts searched the car and found a bag containing the explosives, police spokesman Micky Rosenfeld said. Police removed the bomb from the car, setting off a panic among nearby motorists.

"We were traveling along the highway, on a beautiful spring day ... and suddenly we saw a helicopter swoop down and anti-terror forces speed by," witness Yonatan Danino told Israel Radio. "Suddenly we saw a car with security forces surrounding it. They even came out of the bushes."

"People started to run away from the cars," Danino said. "Police were shouting into megaphones, 'live bomb, live bomb,' and people were running in every direction." Sappers detonated the explosives harmlessly.

A successful attack could have had serious repercussions. The centrist Kadima Party, which holds a wide lead in opinion polls, has been accused by its hawkish rivals of being too soft on the Palestinians.

A deadly bombing just before the 1984 election upset all predictions and handed victory to the hard-liners.

Defense Minister Shaul Mofaz, a Kadima candidate, told the Israeli Ynet Web site that Iran is pushing Islamic Jihad to carry out an attack before the balloting. "We know that Iran transferred in the last month $1.8 million to the Islamic Jihad organization in order to carry out terrorist attacks against Israel," he said.

Coverage of the story topped radio and TV newscasts through the day, although the traffic jam kept reporters away from the scene for half an hour. There was no live coverage of the chase, because Israeli broadcasters do not have their own helicopters. Israel Radio relied on witnesses calling in with their descriptions, and Channel 10 TV bought a shaky amateur video from an Israeli motorist showing the drama unfolding.

Reflecting pre-election jitters, Israel has banned Palestinians from entering the country until after the vote and greatly restricted movement through the Gaza Strip's main cargo crossing. With the closure causing shortages of bread and other essential items in Gaza, Israel allowed the crossing to temporarily reopen Tuesday.

The crossing was opened Monday, but closed after about 30 minutes due to security concerns. Militants have attacked Karni in the past.

Israel has closed the Karni crossing for most of the past 2½ months, warning of more attacks. The closure has caused a shortage in Gaza of bread, dairy supplies and other essential goods.

Palestinians have accused Israel of imposing the closure as punishment following the recent victory by Hamas.

After previously denying such allegations, an Israeli official on Tuesday confirmed that the Karni closure was in part to send a message to Hamas, although he also said the security threats were real. He spoke on condition of anonymity because he was not authorized to speak to the media.