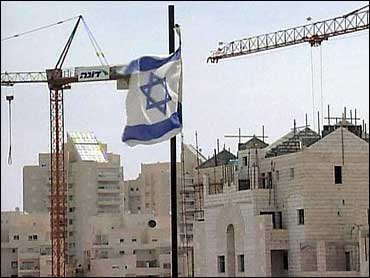 Forty percent of all West Bank settlements were built on private Palestinian land and are therefore illegal, a settlement watchdog group said Tuesday, basing its claims on data provided by Israel's military.

"We are talking about an institutional land grab," said Dror Etkes, a settlement expert with the Peace Now group.

Etkes said Peace Now's claims were based on data the court ordered the military to provide. The group has forwarded the information to Attorney General Meni Mazuz, asking him to take immediate action against the illegal land seizures.

Israel claims that the settlements are built on state land and not on private property, reports CBS News correspondent Robert Berger.

"It's a very important day for anyone that is fighting for civil rights, for liberty, for democracy," he said.

(AP)
Yossi Ben-Ari and Laurent Schuman (left) were married in Canada after that country legalized same-sex marriage in 2003. Determined, after a 21-year partnership, to enjoy all the privileges of a married couple in Israel, they were among five couples who petitioned the Supreme Court court to have their marriage registered here, too.

"We're delighted, but the struggle is not over," Ben-Ari said.

Moshe Negbi, a legal expert, said the court's decision is mostly symbolic because gay couples in Israel already had many of the rights of heterosexual partnerships. The significant changes are that they will now get the same tax breaks as a married couple and be able to adopt children, Negbi said.

Israeli law stipulates a couple must be married to adopt a child.

"The marriages of same-sex couples who marry in places like Canada where the law recognizes such marriages, will also be recognized in Israel, and they will be registered as married here," Negbi said.

But the efforts by Israel's gay community to win approval for same-sex marriage, a key issue in the U.S. and Europe, face a major obstacle because Israel's rabbinate has a monopoly over marriage and divorce.

Civil marriages cannot be performed in Israel because of the rabbinate's monopoly on family law. But couples married in civil ceremonies abroad have all the rights of a married couple, and their marriages are registered here. The court uses the term "register" instead of "recognition" to ward off religious criticism of the ruling, Negbi said.

Animosity toward gays and lesbians is one of the few issues that unites Jews, Muslims and Christians in the Holy Land. They have jointly come out against gay parades in the city, and are all likely to oppose the Supreme Court ruling.

Earlier this month, a planned gay parade in Jerusalem set off days of violence in the city's ultra-Orthodox neighborhoods. Protesters burned trash bins and hurled stones at police, demanding the parade be canceled or moved to secular Tel Aviv.

In the end, Jerusalem's gay community moved the event to a stadium on a university campus in Jerusalem, quelling the threats of violence and allowing 4,000 people to celebrate peacefully.

Still, many cities in Israel have thriving gay scenes. And the Israeli military, an influential and respected institution, is banned from discriminating against gays. Homosexuals are drafted into the army for mandatory service and are given the opportunity to progress up the ranks.

Rocket attacks in Sderot like Tuesday's are turning it into a ghost town, reports Israel's YNet news Web site. Its market and shopping centers are all but empty, as many residents have moved out to safer communities.