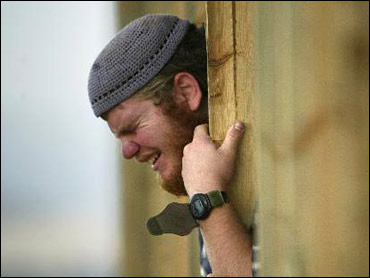 Israeli troops trying to dismantle a West Bank settlement outpost on Tuesday wrestled with dozens of enraged Jewish settler activists before tearing down the walls of a synagogue there.

The military said it only targeted buildings from which shots were fired overnight at Israeli forces, but did not know how many structures were demolished.

Also Tuesday, Israeli jets attacked two bases of the Islamic guerrilla group Hezbollah in Lebanon, in retaliation for a Hezbollah rocket attack Monday on the border that killed an Israeli soldier, reports CBS News Correspondent Robert Berger. Military sources say Israel considered an airstrike on Syria, the key backer of Hezbollah, but decided to avoid an escalation. Israel said the raid is a warning to Syria to restrain Hezbollah.

Israeli troops moved into Tapuach, one of the most militant Jewish settlements in the West Bank to dismantle an illegal outpost, in compliance with the U.S.-backed roadmap peace plan, Berger reports. About 150 settlers resisted and scuffled with troops.

The outpost includes a seminary built by followers of the late and radical American-born rabbi Meir Kahane. They advocate expelling all Arabs from Israel and the Palestinian territories.

Frantic residents of the Rafah Refugee Camp in Gaza threw mattresses and blankets from second-floor windows as beams and walls came crashing down around them. One woman, standing near a bulldozer, waved a white flag in a failed attempt to slow the demolition and buy time to salvage her belongings. A crying girl helped her mother carry a mattress.

Army officials initially insisted the razed houses had been empty, but then said the claim was still being checked. The governor of Rafah, Majed Agha, said about 400 people were left homeless.

Israel has demolished hundreds of houses in Rafah, near the Egyptian border, in more than three years of fighting, saying the buildings gave cover to gunmen and weapons smugglers.

Israeli officials say the camp is a haven for weapons smuggling tunnels from Egypt to the Palestinian-ruled Gaza Strip, reports Berger.

The Palestinians say Israel is clearing large swaths in the camp to distance built-up areas from the narrow strip Israeli troops patrol along the Egyptian border. Israel has erected a tall metal barrier south of the camp as a shield for troops.

The destruction is part of a plan by Israel "to create a wide buffer zone and consolidate Israeli military control in the area," Agha said.

Palestinian officials also are concerned that Israel is stepping up military action, while America is distracted with elections.

Some witnesses in Tapuach say troops used a bulldozer to scoop up the ark holding the synagogue's Torah scroll, a claim that could not be confirmed independently.

Earlier in the day, Israel's Supreme Court rejected a petition to block the evacuation.

Israeli Defense Minister Shaul Mofaz has ordered several outposts demolished, in line with Israel's obligations under the U.S.-backed "road map" peace plan. Israel has to dismantle dozens of outposts — home to about 1,000 people — established by settlers in recent years to try to thwart land-for-peace agreements with the Palestinians.

West Tapuah sits on an isolated ridge about half a mile from the Kfar Tapuah settlement and consists of five trailer homes and a synagogue in a large, barn-like structure with a gabled roof.

Three soldiers were lightly injured and 14 settlers were arrested in the scuffles, Army Radio reported.

One soldier had a bandaged head. Other soldiers grappled with groups of activists, throwing them to the ground and handcuffing them.

Among the crowd of activists were followers of the anti-Arab Kach movement, which is included on the U.S. State Department list of terror organizations and has been outlawed as racist by the Israeli government. Kahane, its founder, was assassinated by an Egyptian in New York in 1990.

Some settlers chanted psalms and others cried as soldiers tore out the walls from the synagogue. Wooden benches from the building were thrown into the back of an army truck to be hauled away.

A young seminary student, who refused to give his name, looked on and compared the scene to the Nazis' treatment of Jews forced into ghettos during World War II.

A hulking, bearded man, who gave only his first name, Arieh, screamed at the soldiers. "When Jews take a Torah scroll from a synagogue, the state of Israel will fall apart," he said.

Some of the soldiers looked shamefaced. One of the activists lunged toward an army rabbi and swatted the skullcap from his head, shouting, "You call yourself a rabbi? You dog, take off your kippeh (skullcap)."

Before sundown, most of the settlers and soldiers had left, and the synagogue's roof was still standing, supported by posts.

Also razed Tuesday in Rafah was a neighborhood mosque, Al Tawhid, which had been partially demolished Saturday, residents said. The mosque is about 70 yards from the Israeli metal barrier. "This is a crime against God's law and human law as well," said preacher Ibrahim Abu Jazar.

The military said it was still checking the report on the mosque. In the past three years, troops have generally stayed clear of holy sites.