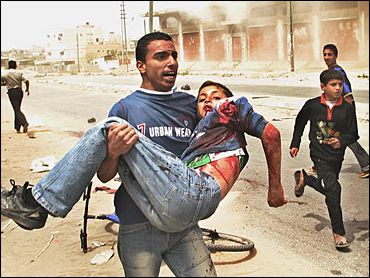 Israel determined to press ahead with its offensive in Gaza despite withering international criticism, after Israeli tank fire killed at least eight Palestinians and wounded dozens of others who were marching to protest the military operation in a refugee camp.

Overwhelmed doctors in a small, bloodstained hospital treated wounded on floors after the Wednesday attack. Israel's military admitted that at least one tank shell exploded in the crowd of protesters marching toward the beleaguered Rafah refugee camp.

Palestinians denounced the shelling as a massacre. Israel apologized for loss of civilian life but blamed the Palestinians for allowing gunmen to mix with the civilian crowd.

The Israeli military said it was supposed to be a warning shot and was not meant to hit the crowd, and has apologized, reports CBS News Correspondent Robert Berger.

In another incident, three Palestinian militants were killed in a missile strike in the Rafah camp near the Egyptian border around midnight, doctors said. The military said a helicopter fired at gunmen approaching Israeli forces.

The U.N. Security Council early Thursday condemned the loss of life and Israel's demolition of homes.

"I expected an abstention, given the very complex and delicate situation in which the United States finds itself today," said Raanan Gissin, an aide to Israeli Prime Minister Ariel Sharon, referring to the conflict in Iraq. He said the U.S. government still "supports Israel's right to defend itself."

The United States declined to condemn the Israeli attack.

"I continue to urge restraint," President George W. Bush told reporters in Washington. "It is essential that people respect innocent life in order for us to achieve peace."

British Prime Minister Tony Blair said the Israeli incursion was "unacceptable and wrong," and urged both sides to resume negotiations on the internationally backed "road map" peace plan, which calls for an end to violence and creation of a Palestinian state.

In Tel Aviv, several hundred Israelis, including reserve air force pilots, demonstrated in front of the Defense Ministry against the Gaza operation.

Despite almost universal criticism, Israeli Defense Minister Shaul Mofaz insisted his army would continue its sweep through the Rafah camp.

Mofaz said the operation "is necessary and essential for the security of Israel ... and will continue as long as necessary." Officials have warned that if tunnels from Egypt are not destroyed, the Palestinians could arm themselves with rockets that could hit Israeli cities.

The tank shelling came Wednesday afternoon as several thousand Palestinians marched to the refugee camp, where Israeli troops have been searching houses for weapons and gunmen since Tuesday.

An Israeli helicopter flew overhead, and a large explosion went off in the crowd. Associated Press Television News footage showed smoke and debris flying, followed by Palestinians carrying the injured, including several children with bloodstained faces, away from the blast.

"I could see the tank, first it fired a tank shell, it landed next to an electricity pole," said Hisham Ashour, 45, who was near the front of the crowd.

Dr. Moawiya Hassanain, a Palestinian Health Ministry official, said at least 10 people were killed and 50 wounded, 36 of them critically. Among six of the dead identified by Wednesday evening, four were children, ranging in age from nine to 14. The two others were 17 and 20. Most of the wounded were youngsters.

The injured were evacuated by ambulance, fire engine, private cars and donkey carts to the Rafah hospital, witnesses said. The hospital stairs and floors were drenched in blood as doctors shouted for help and blood donations. Hospital staff treated the wounded on the floors after quickly running out of beds.

Israeli army spokeswoman Brig. Gen. Ruth Yaron said a helicopter fired a warning missile at an open area to hold back the crowd. She said several gunmen were spotted among the marchers.

When the crowd continued to advance, soldiers fired four tank shells at an abandoned building, which obstructed their view of protesters who were passing behind it, the army said. At least one of the shells tore through the building and hit the crowd.

Later, military officials pointed to an army regulation banning the firing of tank shells as a warning.

Palestinian leader Yasser Arafat called the deaths "genocide" and a "massacre that stands against all humane, civilized and political principles."

The invasion — the largest in the Gaza Strip in years — came less than a week after Palestinian militants killed 13 soldiers in Gaza.

The fighting has revived debate inside Israel on its continued presence in Gaza. Prime Minister Ariel Sharon has proposed withdrawing from the volatile area, but his Likud Party rejected the proposal earlier this month. Sharon has pledged to push forward with his plan.