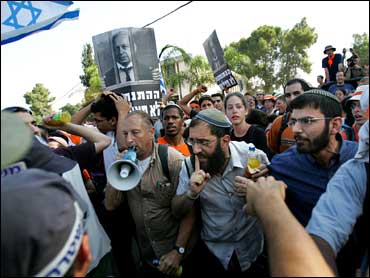 Israeli police on Tuesday faced off against thousands of Gaza withdrawal opponents, including teens with backpacks and parents with strollers, to block them from marching to the nearby Gaza Strip in a protest against the summer's planned withdrawal.

It was the biggest showdown between protesters and the security forces since Prime Minister Ariel Sharon announced last year that he would dismantle all 21 Jewish settlements in Gaza and four in the West Bank.

In other developments Tuesday:

Israeli authorities shut off the entrances to Kfar Maimon Tuesday afternoon, to prevent the marchers from continuing into the Gaza Strip, about 9 miles away.

Demonstrator Avraham Ravi, 33, brought along his four children, ages one to eight. On Tuesday morning, Ravi, his wife and children sat under a tree in Kfar Maimon, getting ready for the second day of the march. "We walked all night. It wasn't easy with the kids," said Ravi, from the West Bank settlement of Tel Menashe. "But we tell them that this is to block those people who want to divide Israel."

Israeli Defense Minister Shaul Mofaz said the marchers would not be allowed to move any closer to Gaza, setting the stage for possible confrontations.

Police have declared the march illegal. Regional police commander Uri Barlev said demonstrators could remain in Kfar Maimon indefinitely, but would not be allowed to move west, to Gaza. Police were deployed around the fenced-in village, and at roadblocks leading from Kfar Maimon to Gaza.

Police estimated that about 7,000 marchers had assembled in Kfar Maimon, while organizers put the number at more than 20,000.

Settler leader Pinchas Wallerstein said the protest could last many days. "As long as this terrible decision stands (to withdraw from Gaza), there will be a constant presence to prevent this," he told Israel Army Radio. He said the protesters would try to keep moving toward Gaza. "Wherever they stop us ... we will stay," he said.

The marchers want to reach the Jewish settlements in Gaza, and to participate in resisting the withdrawal, set to begin in mid-August. Police last week declared the Jewish settlements a closed military area, meaning only residents can come and go. Police also beefed up barricades at the Kissufim crossing, the gateway from Israel to the Gaza settlements, adding rolls of barbed wire and concrete blocks.

The army said the gunmen killed in the West Bank were members of two militant groups, Islamic Jihad and the Al Aqsa Martyrs' Brigades, which has ties to Palestinian leader Mahmoud Abbas' Fatah movement.

Israel has intensified arrest raids of militants after six Israelis were killed last week, five in a suicide bombing by Islamic Jihad and one in a rocket attack by Hamas. Militants also fired a barrage of rockets and mortar rounds at Israeli communities in and near Gaza. Israel carried out several air strikes last week, killing six Hamas militants.

The weekend violence left a five-month-old truce in tatters, but Israeli and Palestinian leaders said Monday they would try to stop the escalation, and. Israeli Vice Premier Ehud Olmert said troops amassed outside Gaza would not invade the strip if Abbas can subdue the militants.

Abbas, in turn, said that he would negotiate with the militants to rescue the cease-fire, seen as the main achievement of his six months in office. However, he also warned the militants that they must refrain from acting on their own. "Nobody has the right to take the law into his own hands, nobody," he said Monday.

Tensions between Palestinian police and militants in Gaza have also been running high in recent days, as Abbas comes under increasing U.S. and Israeli pressure to rein in and disarm militant groups.

"We have declared the state of emergency and we are taking the utmost precautions and our members were warned to prepare to face any attack against us or against the Palestinian security forces," said a spokesman for the Al Aqsa Martyrs' Brigades — a militant group loosely linked to the Fatah party.

Abed Ashkar, director of the Al-Arabi Center for Research for Studies and Documentaries that published four books during the recent fighting, including one about Hamas leaders killed by Israel, said he got a phone call early Tuesday telling him his center had been burned down, and severe damage had been caused to the interior.

He could not give an immediate cost estimate of the damage.

"This incident is a very serious and a very dangerous one and can serve only the Zionist enemy. We call on the Palestinian Authority to show its responsibility and to arrest whoever is behind this awful crime," Ashkar said.