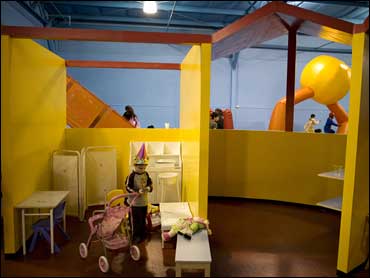 Battered by years of Palestinian rocket attacks, this southern Israeli town opened a heavily fortified indoor playground on Tuesday that will give its traumatized children a safe place to play.

The converted warehouse is equipped with a half dozen shelters and an emergency broadcast system giving the kids a 15-second warning for incoming rockets. Thousands have exploded in the town next to Gaza over the past eight years, including dozens since Israel's January offensive in Gaza ended.

The protected facility, with a mini-soccer field, video games and a climbing wall, received a warm welcome from residents.

"It's an amazing thing. Until now, only the house and school were safe," said Pesah Hajbi, a 43-year-old father of three. But he added, "It's cold comfort. If they don't stop firing, at least there is a safe place to play."

Eight Sderot residents have been killed, hundreds wounded and nearly everyone in the working-class town of 24,000 has been traumatized by the frequent sound of sirens and explosions of incoming projectiles fired by Palestinian militants just across the fence in Gaza.

Also Tuesday, Channel 10 TV aired a report about a new method of protecting Sderot buildings, using a spray-on material developed for Israel's nuclear reactor in Dimona. The report showed a worker spraying the orange material on the inside of a kindergarten.

A test explosion showed a wall badly damaged from the outside but intact inside, because the material absorbed the blow.

The $5 million safe recreation center, funded by the Jewish National Fund-U.S., is surrounded by anti-shockwave walls, painted in blue, yellow, green and red. Nearly 2,000 square meters (21,000 square feet) in size, it has room for 500 people.

It is divided into two areas - one for infants and toddlers and the other for children in elementary and high school. It will also be used by seniors during morning hours and can be converted into a disco at night.

Children in costumes celebrating the Jewish holiday of Purim roamed the complex on Tuesday, playing in a mock shopping mall for dolls, jumping on an inflatable trampoline and playing foosball and air hockey. One kid, dressed as Spiderman, excitedly ascended the climbing wall. Teenagers found an outlet for their frustrations, pounding away at the hanging punching bags.

"Today, we bring back the childhood to the children of Sderot, and let them feel like other children all over the world," said Sderot Mayor David Buskila.

Psychologists will be on the site for intervention with children and families in need, and a medical station will also be available.

JNF President Stanley Chesley said the idea for the rocket-proof playground came during his last visit to the town, when he realized that the children of Sderot were holed up in their homes. He boasted that the new center was now "the country's safest building." The sounds of children laughing and yelling drowned out his speech.

"We want to hear this kind of noise all the time," he said, smiling.

Sderot resident Devora Biton, 43, said Tuesday's outing was the first time she relaxed enough to let her 4-year-old daughter Noam run around and play freely with other kids. Biton said coming to the playground was liberating for her as well.

"It gives a sense of security. Out on the street you are tense all the time and can't let your kids go far," she said. "The house is like a prison. We try to make it nice, but it still feels like a prison."

Even so, she said she had mixed feelings, because the indoor playground is necessary.