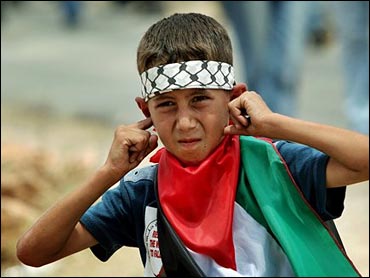 Israel is considering using an unusual new weapon against Jewish settlers who resist this summer's Gaza Strip evacuation - a device that emits penetrating bursts of sound that leaves targets reeling with dizziness and nausea.

Security forces could employ the weapon to overcome resistance without resorting to force, their paramount aim. But experts warn that the effects of prolonged exposure are unknown.

The army employed the new device, which it dubbed "The Scream," at a recent violent demonstration by Palestinians and Jewish sympathizers against Israel's West Bank separation barrier.

Protesters covered their ears and grabbed their heads, overcome by dizziness and nausea, after the vehicle-mounted device began sending out bursts of audible, but not loud, sound at intervals of about 10 seconds. An Associated Press photographer at the scene said that even after he covered his ears, he continued to hear the sound ringing in his head.

A military official said the device emits a special frequency that targets the inner ear. Exposure for several minutes at close range could cause auditory damage, but the noise is too intolerable for people to remain in the area for that long, he said.

Another official, also speaking on condition of anonymity because of his sensitive position, said the device hasn't been tested on subjects for hours at a time, so he couldn't discuss effects from prolonged exposure.

He said there was no direct connection between the recent introduction of "The Scream" and the forcible removal of settlers who resist evacuation orders, which is to begin in mid-August. But he didn't rule out the possibility of using it to root out settlers if persuasion fails.

The other official said "The Scream" could be used if protesters march on Gaza settlements or take up military positions.

"The whole issue of non-lethal is viewed from a desire not to get into a situation where soldiers are in distress and the consequences would be harsher than expected," he explained.

He said the military is still evaluating the device's debut performance in the field.

John Pike, director of the GlobalSecurity.org think tank in Alexandria, Va., said he believed last Friday's demonstration was the first case of such technology making it out of the laboratory and into the field. He said the U.S. and possibly China and Russia are developing acoustic weapons.

"I'm not aware of any other agency that is actively using it at this point," Pike said.

The military offered few details on the device, but Pike said he assumed it worked on very low frequencies that set off resonance in the inner ear. He said he was unaware of potential damage besides possible hearing loss.

Though the military refused to comment, Pike said the device probably sends its sound waves out in a specific direction, protecting the soldiers behind it.

"Most governments don't face large-scale demonstrations with a potential for lethal violence," he said. "So I think I would look to Israeli security forces to be an innovator in the non-lethal arena, simply because of the unique challenges it faces in the crowd control arena."

The military officials said Israel is constantly trying to bring new non-lethal weapons into the field but wouldn't disclose details. Its current arsenal includes tear gas as well as rubber-coated steel bullets, which have caused dozens of Palestinian fatalities.

Critics say Israel, with all its military technology savvy, should have done more in the years since the first Palestinian uprising began in 1987 to develop non-lethal weapons for use against hostile Palestinian masses.

Troops often turn to live fire, sometimes against teenage Palestinian stone-throwers. Police, too, used deadly force in October 2000 to put down rioting by Israeli Arabs at the start of the second Palestinian uprising. Thirteen Israeli Arabs were killed in those riots, and a commission of inquiry found that police used excessive force.

Israel's B'Tselem human rights group says Israeli security officers don't come equipped to police protests. "Although they could have anticipated they would have to disperse crowds, they didn't equip themselves with non-lethal means," spokeswoman Sarit Michaeli said.

Pike said the reason there aren't more non-lethal weapons available worldwide is because it is difficult to achieve both safety and effectiveness.

"The number of things that are genuinely effective at crowd control and substantially less lethal than lethal weapons - it's a pretty short list," he said.

Weapons like pepper gas wouldn't put off a determined crowd, Pike said. Something like sticky foam might keep people out of a building, "but if I'm talking about controlling a mob in a city square, it just doesn't enter into play," he said.