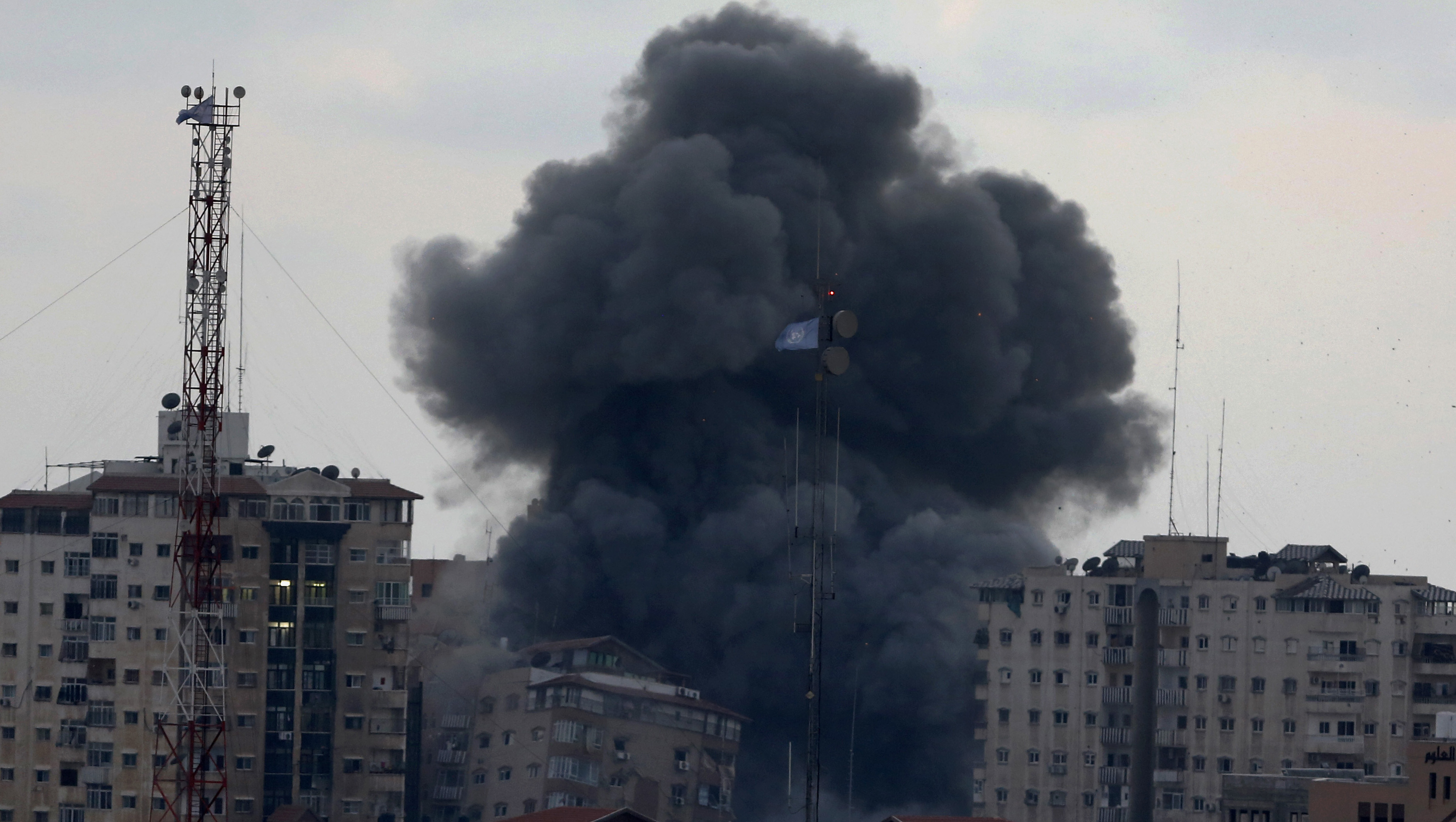 The violence signaled that a speedy resumption of truce talks is unlikely, despite another appeal by mediator Egypt. Gaps between Israel and Hamas on a border deal for blockaded Gaza remain vast, and repeated rounds of talks have ended in failure.

In the Gaza City strike, a huge fireball followed by a black column of smoke rose into the sky after two Israeli missiles toppled the Zafer Tower, one in a group of several high-rises in the upscale Tel al-Hawa neighborhood. Neighboring buildings shook from the blasts.

The Israeli military said the missiles targeted a Hamas operations room in the building, but did not explain why the entire tower with 44 apartments was brought down.

Gaza police said a warning missile had been fired five minutes earlier and that some residents were able to rush out of the building in time. Still, 22 people were wounded, including 11 children and five women, according to Gaza hospital officials.

Maher Abu Sedo, an area resident, said the two strikes came within seconds of each other.

"People started shouting Allahu Akbar, and women and kids were screaming," he said. "This is crazy. The state of Israel has resorted to madness. In less than a minute, 44 families have become displaced ... They lost everything, their house, their money, their memories and their security."

Some 100,000 Gazans have become homeless, with more than 17,000 homes destroyed or damaged beyond repair, according to U.N. figures. However, Saturday strike marked the first time an entire apartment high-rise was destroyed.

Elsewhere in Gaza, an airstrike on a car killed a man and wounded 11 people, said Ayman Sahabani, head of the emergency room at Gaza City's Shifa Hospital. The Popular Front for the Liberation of Palestine later identified the man killed as a field commander.

Meanwhile, Gaza militants fired over 100 rockets and mortar shells at Israel on Saturday. The barrage came a day after a mortar shell from Gaza hit a farming village in southern Israel, killing a 4-year-old boy.

Israeli media said large numbers of residents of southern Israeli communities near the Gaza border were leaving their homes and heading for safer areas following the death of the boy in Kibbutz Nahal Oz.

"I say whoever can leave, whose presence is not crucial should leave," said Minister of Public Security Yitzhak Ahronovich during a visit to the south on Saturday.

Defense Minister Moshe Yaalon called on southern residents to be ready for a prolonged campaign against Hamas militants.

"In the end we will win," he said Saturday. "This is a test of staying power and strength."

Since the fighting erupted on July 8, Israel has launched some 5,000 airstrikes at Gaza, while Gaza militants have fired close to 4,000 rockets and mortars, according to the Israeli military.

More than 2,100 Palestinians, including close to 500 children, have been killed, according to Palestinian health officials and U.N. figures. Israel has lost 64 soldiers and four civilians.

Israel says it is targeting sites linked to militants, including rocket launchers, command centers and weapons depots. The U.N. says about three-fourth of the Palestinians killed have been civilians.

A formula for ending the war remains elusive.

Hamas demands that Israel and Egypt lift a Gaza border blockade they imposed in 2007, after Hamas seized the territory from Western-backed Palestinian President Mahmoud Abbas.

Israel says it can ease, but not remove the stifling restrictions on Palestinian trade and travel unless Gaza militants agree to disarm and stop manufacturing or smuggling weapons. Hamas has rejected that demand.

During stop-and-go truce talks, Egypt has presented compromise proposals, including a gradual easing of movement for people and cargo at two crossings between Israel and Gaza. However, Israel offered no specific commitments, and Hamas rejected the idea.

Abbas has urged Hamas to accept the plan, which would also give him a new foothold in Gaza because forces under his command would be deployed at the border crossings.

Abbas met Saturday with Egyptian President Abdel-Fattah el-Sissi in Cairo to try to find ways to resume truce talks. After the meeting, the Egyptian Foreign Ministry urged Israel and Hamas to agree to an open-ended cease-fire and resume indirect talks. Egyptian officials did not say how they expected renewed talks to produce a different outcome after repeated failures.

Israeli Prime Minister Benjamin Netanyahu blamed Hamas for the collapse of the most recent cease-fire. In a phone conversation with U.N. Secretary General Ban Ki Moon, Netanyahu alleged that Hamas has violated 11 cease-fires since the war started, Netanyahu's office said.

Israeli government spokesman Mark Regev had no immediate comment regarding the renewed call for a cease-fire. Sami Abu Zuhri, a spokesman for Gaza's ruling Hamas, said the group would consider the Egyptian appeal, but there was no sign it would budge from longstanding demands.

Earlier Saturday, Hamas announced that it has signed a pledge to back any Palestinian bid to join the International Criminal Court. Such a bid could expose Israel, as well as Hamas, to possible war crimes prosecution.

Hamas had hesitated for weeks before giving its written consent. Its decision could further increase domestic pressure on Abbas to turn to the court.

Abbas has debated the issue for months, since seeking ICC action could transform his relations with Israel from tense to openly hostile, strain his ties with the United States and deprive his government of badly needed Western financial support.

Last month, Abbas said he would not make a move without the written consent of all Palestinian factions. He obtained such support from all groups represented in the Palestine Liberation Organization, while Hamas, not a PLO member, said it would study the idea.

It remains unclear if Abbas will turn to the court, now that he has Hamas support in writing. An Abbas aide said last week that no decision would be made before March when a U.N. commission of inquiry into possible war crimes committed in the Gaza war is to hand in its findings.