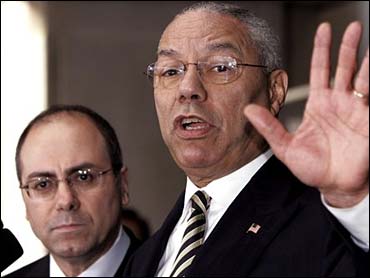 Israel will do "everything in its power" to enable Palestinian elections to take place, the foreign minister said Monday after meeting with Secretary of State Colin Powell.

Powell is on a one-day peace mission to the Middle East, meeting separately with Israeli and Palestinian leaders, reports CBS News Correspondent Robert Berger. Powell said the post-Yasser Arafat era is a moment of opportunity to revive the roadmap peace plan, and the elections are a good start.

"What we really need is for the Palestinian side in this new era to speak out clearly against terrorism," Powell said.

The Palestinians have said Israel must withdraw troops from West Bank towns so the Jan. 9 presidential elections can be held.

Foreign Minister Silvan Shalom did not refer specifically to a troop withdrawal, but said the Palestinians would have "freedom of movement" in the runup to the vote. He said arrangements would be coordinated with the Palestinians.

"The passing of Yasser Arafat, just like the progress toward elections in Iraq, represents an opportunity for real and positive change in our region," said Shalom.

Israeli Foreign Ministry spokesman Mark Regev said Israel has "every intention" of redeploying troops so as to allow the Palestinian election.

Israel had reoccupied most West Bank towns in a 2002 military offensive aimed at stopping Palestinian suicide bombings in Israel. Troops have since withdrawn from some areas but continue to enforce tight travel restrictions on Palestinians.

Shalom said "the first priority is the Palestinian election, which will hopefully bring about a Palestinian leadership that we will be able to sit down with."

"I have reassured the secretary today that Israel will do everything in its power to ensure" the elections will go ahead as planned.

"I am pleased with level of coordination and cooperation that now exists between the Israeli government and the Palestinian authority so those elections can be held," he said.

Powell's visits are part of an international push for progress toward a new Israel-Palestinian accord after Arafat's death Nov. 11 and ahead of Jan. 9 elections to pick his successor as president of the Palestinian Authority. The United States and Israel boycotted the longtime Palestinian leader, charging he was tainted with terrorism.

Palestinians have had only one general election, in 1996. Elections have been scheduled several times in recent years but then canceled, as Palestinians said they could not carry out a campaign with the Israelis in control of the territory.

Israel has explained its draconian security measures, which have contributed to severe disruption of the Palestinian economy and widespread poverty, by pointing to more than 100 Palestinian suicide bombings in the past four years and the need to prevent further attacks.

However, Arafat's death has softened the Israeli line and raised world expectations for a thaw.

Regev said the new Palestinian leadership "could help us by coming down on the terrorists," but he did not make that a condition for an Israeli withdrawal of troops.

For their part, Palestinians say Israel is to blame for the violence and should resume peace talks with no preconditions.

Palestinian Cabinet Minister Saeb Erekat said the Palestinians were trying, through the Americans, to set up a meeting with their Israeli counterparts to discuss election arrangements.

"We are expressing a readiness to meet with the Israeli side in order to coordinate with them immediately the administrative and security arrangements," Erekat said.

Powell was asked to step down after telling President Bush he wanted more power to confront Israel over the peace process, according to London's Sunday Telegraph.

Powell had long been rumored as ready to resign, but the paper quoted friends as saying he had decided to stay because of the prospect for progress in the Middle East. However, he was not asked to stay on, says the Telegraph, largely because of the opposition of Vice President Dick Cheney and Undersecretary of State John Bolton, both of whom want the administration to focus primarily on Iran's nuclear ambitions and the fight against Islamic terrorist groups.

In other news, an Israeli military court Monday charges the commander of an army unit with illegal use of firearms and disruption of investigation procedures, in connection with the killing of a 13-year-old Palestinian girl. The officer, who has not been named, is accused of firing his automatic weapon into the girl's already-prone body near an outpost in the southern Gaza Strip. It is believed to be the first time an officer has been brought up on charges for what Israeli troops call "confirming a kill."