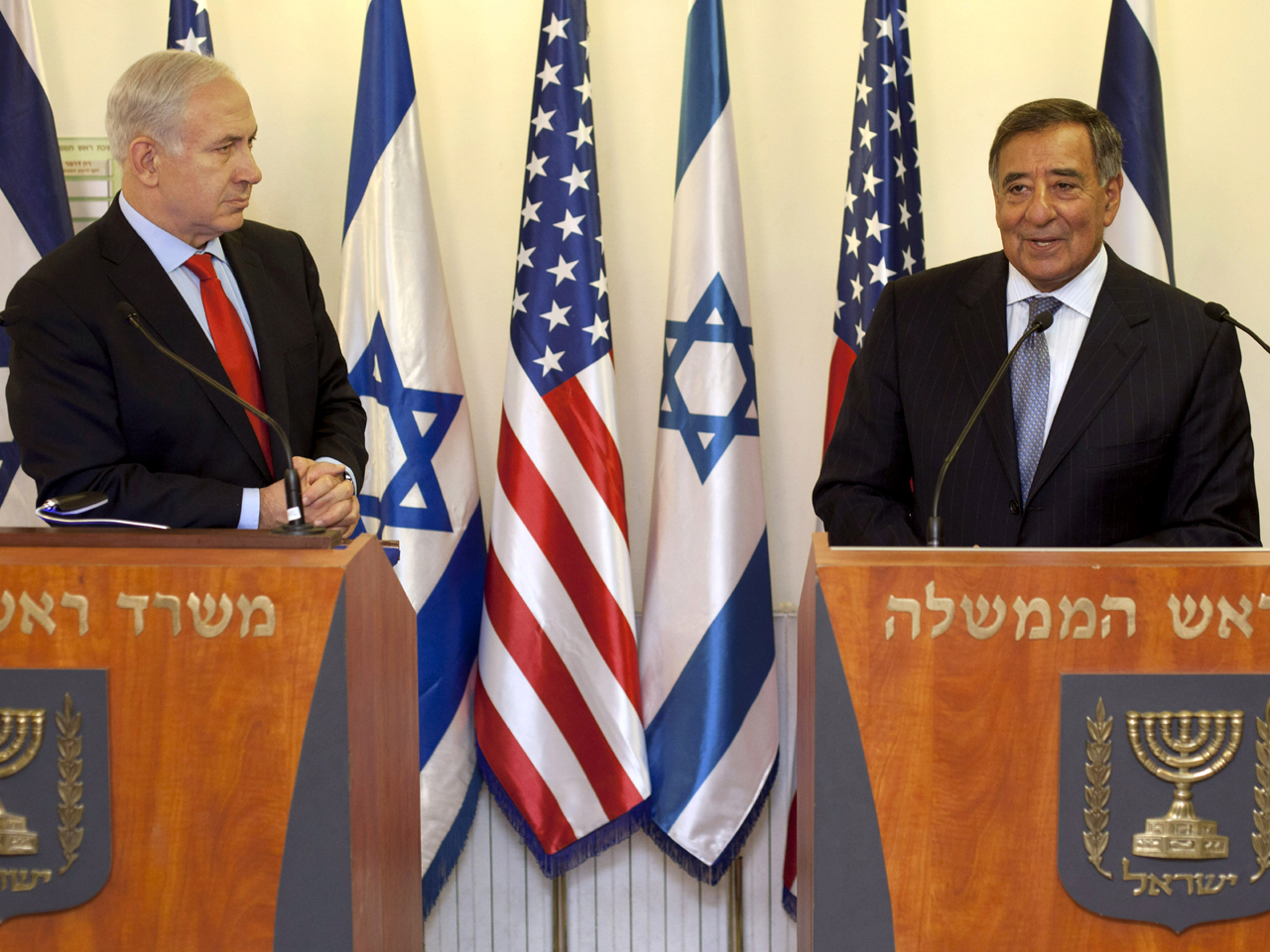 (AP) JERUSALEM - Israeli Prime Minister Benjamin Netanyahu, standing next to the U.S. defense chief, said Wednesday without qualification that international economic sanctions have had no effect on Iran's nuclear program and suggested Israeli patience was wearing thin, a statement that amounted to an indictment of President Barack Obama's policy toward the Islamic republic.

Netanyahu did not explicitly threaten to attack Iran, but that was the unspoken implication of his assertion that all non-military measures have proven ineffective in persuading Iran to change its course.

"Right now the Iranian regime believes that the international community does not have the will to stop its nuclear program," Netanyahu said. "This must change, and it must change quickly because time to resolve this issue peacefully is running out."

His message was particularly striking, given that he delivered it beside Panetta, who spent two days in Israel offering reassurances that the two allies shared the same goals on Iran.

Panetta argued that all non-military means of pressuring Iran must first be exhausted before military action is called for. He said repeatedly that Washington still considers military action an option for the future.

But Netanyahu was unyielding in his view that more must be done now. He said sanctions have hurt Iran's economy but not achieved their ultimate purpose, which is to change the calculus of Iran's rulers.

"Neither sanctions nor diplomacy has yet had any impact on Iran's nuclear weapons program," the Israeli leader said.

"America and Israel have also made clear that all options are on the table. You yourself said a few months ago that when all else fails, America will act," he said, referring to statements by Panetta. "But these declarations have also not yet convinced the Iranians to stop their program."

Iran asserts that its nuclear program is meant to produce civilian energy, not to make weapons. And it insists that it has a right under the Nuclear Non-Proliferation Treaty to enrich the uranium that can be used either to power civilian nuclear reactors or to build bombs.

Panetta's visit came on the heels of a stop here by Mitt Romney, the presumptive Republican presidential nominee, who has accused the Obama administration of doing too little to help Israel and too little to stop Iran.

In his joint appearance with Panetta at an air defense site in southern Israel, Defense Minister Ehud Barak sought to emphasize solidarity with the Obama administration, crediting Panetta and Obama for the "extraordinary" strength of the U.S.-Israeli defense relationship.

But he, like Netanyahu, parted ways with Washington by expressing doubts about the viability of the sanctions strategy.

Standing beside Panetta and flanked by American and Israeli flags, Barak said he sees an "extremely low" probability that international economic sanctions will cause the Iranian leaders to give up their nuclear ambitions.

"We have clearly something to lose" while the world waits for sanctions to have the desired effect, "because the Iranians are moving forward," Barak said.

Netanyahu's and Barak's statements, taken together, dramatized the growing strain in U.S.-Israeli relations.

The Obama administration has steadily ratcheted up the severity of economic sanctions on Iran, and on Monday Congress agreed on a new package of sanctions that expand financial penalties and further target Tehran's energy and shipping sectors. Iran angrily equated the moves to economic "warfare."

Some argue that tough economic sanctions are a blunt instrument of power that harms a wide swath of ordinary Iranians without punishing those whose political decisions are the target of the penalties.

The National Iranian American Council, which seeks to promote better relations between the two countries, denounced the latest sanctions.

"The bill imposes collective punishment on the Iranian people by seeking to destroy the Iranian economy," said the council's policy director, Jamal Abdi. "Meanwhile, Iranian regime officials do not suffer from lack of food or medicine and the Iranian Revolutionary Guard Corps enjoys an increasing share of economic power under a sanctions economy."

Panetta highlighted a series of measures the Obama administration has taken recently to improve Israel's defenses. He noted that the U.S. has invested more than $200 million in an air defense system known as Iron Dome, which is designed to shoot down short-range rockets, mortars and artillery shells fired into northern Israel from southern Lebanon and into Israel's south from the Gaza Strip. An Iron Dome launcher formed the backdrop to Panetta's news conference with Barak near the city of Ashkelon, five miles north of Gaza.

Panetta also said the administration is working with the builder of the Air Force's next-generation F-35 fighter to include a special package of enhancements on the version that Israel intends to purchase.