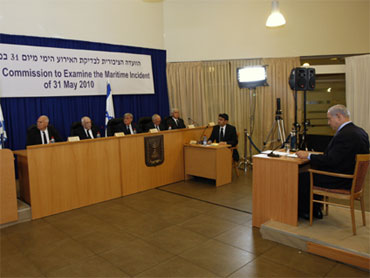 Israel has threatened to pull out of a U.N. inquiry into a deadly raid on a Turkish flotilla heading for Gaza, after the U.N. chief said there is no agreement that the panel would refrain from calling Israeli soldiers to testify.

Last week Israel agreed to participate in the U.N. probe into the May 31 raid, when nine pro-Palestinian activists were killed after Israeli naval commandos boarded a Turkish vessel aiming to break Israel's sea blockade of Gaza.

The surprise development late Monday came just hours after Israeli Prime Minister Benjamin Netanyahu testified before his country's own inquiry into the raid. He charged that Turkey had an interest in the violent confrontation, refusing to exert its influence to stop the flotilla. A Turkish official rejected that as "ridiculous."

Israeli officials said the agreement to take part in the U.N. probe was conditional on the panel relying on reports from Israel's own military inquiry, not testimony from soldiers.

But at a Monday news conference at U.N. headquarters, Secretary-General Ban Ki-moon was asked whether he had agreed not to summon Israeli soldiers before the panel.

"No, there was no such agreement behind the scenes," Ban said, adding that the panel is supposed to work with the Israeli and Turkish inquiries. "And whatever is needed beyond that, they will have to discuss among themselves, in close coordination with the national government authorities, that they can take their own future steps," he said.

In response, the Israeli Prime Minister's office issued a harsh statement. "Prime Minister Benjamin Netanyahu makes it absolutely clear that Israel will not cooperate with and will not take part in any panel that seeks to interrogate Israeli soldiers," it said.

Israel's agreement to join the probe represented a change in its policy of boycotting U.N. inquiries, considering the world body and its committees biased. This time, however, the international outcry against the deadly raid and the spotlight it turned on Israel's punishing three-year blockade on Gaza appeared to give it little choice but to cooperate.

Israel appointed a retired senior diplomat, Joseph Ciechanover, to join the U.N. panel and was preparing for the start of its deliberations on Tuesday when Ban made his remark, throwing those plans into turmoil.

A senior Israeli official said the advance agreement with Ban was that requests for additional information or clarifications from the panel would be routed through the Israeli representative, and soldiers would not be called for testimony.

"This was and remains a vital condition for Israeli participation in the panel," he said. The official spoke on condition of anonymity because he went beyond the government statement. This appeared to leave the door open for Israel to resume its cooperation if soldiers are exempted from testifying.

At the Israeli inquiry, Netanyahu gave his version of the events leading up to the clash at sea.

"As we got closer to the date it became clear our diplomatic efforts would not stop it," Netanyahu said. "Apparently the government of Turkey did not see potential friction between Turkish activists and Israel as something that goes against its interests."

Suat Kiniklioglu, A member of the Turkish parliament's foreign affairs committee, charged that Netanyahu's contention that Turkey was interested in a confrontation "is not only ridiculous but constitutes an affront to our intelligence." Kiniklioglu said the real problem, which still remains, is Israel's "inhumane blockade of the Gaza Strip."

Israel has released video footage showing the commandos being pummeled with wooden planks and metal rods as they landed on the ship. The pro-Palestinian activists on board the Mavi Marmara have said they acted in self-defense after Israeli troops boarded their boat in international waters.

The five-member Israeli commission, headed by a retired Supreme Court justice and joined by two foreign observers, is looking into the government's decision-making leading up to the raid. Although it does not have the power to mete out punishment, its findings could be politically damaging to Netanyahu and other top officials.

Israel's defense minister is scheduled to face the Israeli inquiry on Tuesday, to be followed by the military chief.

A separate Israeli military inquiry found that military intelligence had failed to predict the violent response on board the Turkish vessel, and troops went in unprepared, expecting only passive resistance. But it said the commandos had acted properly.