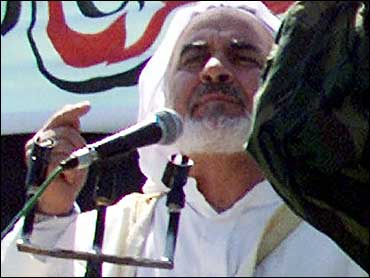 Israeli troops raiding a Gaza refugee camp arrested a Hamas founder Monday, targeting the political leadership of the Islamic militant group for the first time in 29 months of fighting.

Eight Palestinians, among them a pregnant woman, were killed in clashes in the camp.

Troops also blew up four homes in the Bureij camp, including that of Hamas co-founder Mohammed Taha, 65, who was wounded in clashes with soldiers, the army said. Several adjacent houses and a mosque were damaged by the blasts.

Taha's five sons — all senior Hamas activists — were also arrested. One son, Ayman, who was also wounded Monday, is the assistant of the top Hamas bombmaker, Mohammed Deif, the army said. Deif is No. 1 on Israel's wanted list.

The arrests signaled a turning point in Israel's dealings with Hamas, which has killed hundreds of Israelis in shootings and bombings. Since the outbreak of fighting in September 2000, Israel has killed scores of Hamas militants and rounded up hundreds of activists, but left the political leadership in Gaza alone.

"This is a continuation of the escalated aggression against our people and our holy places," Palestinian leader Yasser Arafat told The Associated Press. His Cabinet minister Saeb Erekat called for U.S. intervention to stop Israel's actions.

Later Monday, Palestinians fired four rockets from the northern Gaza Strip at the nearby Israeli town of Sderot, the army said. A number of Israelis were treated for shock but no serious injuries were reported.

Near Nablus, the West Bank's largest city, a Palestinian man was shot by troops as he skirted an Israeli army checkpoint, Palestinian security officials said. Doctors said he was hit in the leg and bled to death before reaching the hospital.

The military said the man was seized by troops as he tried to slip out of the city, which is under an Israeli blockade. He broke away from his captors and was shot in the leg after ignoring calls to stop and warning shots, the military said.

Mohammed Taha founded Hamas — an acronym for Harakat al-Muqawama al-Islamiya, or Islamic Resistance Movement — in 1987, along with the group's spiritual leader, Sheik Ahmed Yassin. Its goal is the formation of an Islamic state in place of Israel.

Since then, the group has emerged as Arafat's biggest political rival. Mohammed and Ayman Taha were among about 400 suspected Islamic militants Israel deported to Lebanon for a year in 1992.

Since the outbreak of fighting in September 2000, Hamas has killed hundreds of Israelis in bombings and shootings. In response, Israel has rounded up many Hamas activists, including leaders of the military wing. It has not targeted the political leadership, however, instead hitting installations of Palestinian security forces.

Monday's incursion began at about 2 a.m. when jeeps and tanks backed by helicopters rolled into Bureij in central Gaza. Fierce fighting erupted, and hospital doctors said eight Palestinians were killed. Five were gunmen and three were civilians — two boys, ages 14 and 16, and a 33-year-old woman in her ninth month of pregnancy.

The woman was killed when her house collapsed on her during the demolition of a nearby building, doctors and her family said. Six other family members were injured.

Israeli soldiers prevented ambulances from evacuating the wounded from Bureij for several hours. Army spokesman Assaf Liberati said the first priority was to protect soldiers and expressed concern that some of the ambulances were booby-trapped.

The army said it demolished four houses of militants, including the two-story Taha family home and the home of a suicide bomber. Hand grenades were thrown from the Taha house at soldiers who returned fire, wounding Mohammed and Ayman Taha before they were arrested, the army said. In blowing up the house, troops damaged the outer wall of an adjacent mosque where Mohammed Taha was a preacher.

The military confirmed that soldiers entered the mosque, looking for weapons. An AP reporter touring the mosque saw windows smashed and bullet holes in the facade, apparently from Israeli helicopter fire; the mosque is in an alley too narrow for ground fighting. The army denied the damage was deliberate.

Israeli army spokeswoman Maj. Sharon Feingold said Taha "is one of the most senior Hamas activists and terrorists, and I am happy to say he is in our hands." She said the raid "is a clear message to the terrorists that … there's a price to be paid."

Hamas said Taha's arrest was a serious blow, but that the group would continue attacking Israelis. "Israel will pay a high price for its crimes," spokesman Abdel Aziz Rantisi said.

The army's offensive against Hamas in Gaza began two weeks ago, after Hamas blew up an Israeli tank, killing its four-men crew. Since then, 44 Palestinians, including Hamas gunmen and at least eight civilians, have been killed in 14 Israeli raids in towns and camps.