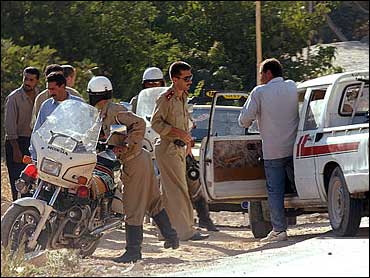 Israel on Sunday bombed what it said was an Islamic Jihad training base deep in Syria, expanding the battleground in pursuit of Palestinian militants after 19 Israelis were killed in an Islamic Jihad suicide attack in a crowded beachfront restaurant.

Israel launched the air strike, its first attack on Syrian soil in more than two decades, just hours before Yom Kippur, the holiest day on the Jewish calendar, and warned it would strike at militants anywhere.

CBS News Correspondent Robert Berger reports the raid could widen the Mideast conflict by putting the two regional powers on a collision course. The attack alarmed the Arab world and deepened concerns of the Israeli-Palestinian conflict spreading to neighboring countries.

The United States called on all sides to show restraint.

Islamic Jihad denied it has training bases in Syria. Another group, the tiny Syrian-based Popular Front for the Liberation of Palestine-General Command said it once used the camp, located 14 miles northwest of Damascus, but that it is now deserted. A guard was injured in the air strike, the Iranian-funded group said.

However, a senior Popular Front member, speaking on condition of anonymity, acknowledged that there is close cooperation between his group, Islamic Jihad, the militant Hamas, and the Lebanese guerrilla faction Hezbollah. All four train together, mostly in Lebanon, but also in Syria, he said.

The Syrian Foreign Ministry said it would complain to the United Nations, but it appears unlikely Syria's military will retaliate. The Israeli-Syrian frontier has been relatively quiet since Israel captured the Golan Heights from Syria in the 1967 Mideast War.

Syrian President Bashar Assad is already on the defensive, with the United States accusing him of hosting extremist groups and sponsoring terror. The Bush administration also contends Syria is aggressively seeking to acquire and develop chemical, biological and nuclear weapons.

Assad, after meeting with U.S. Secretary of State Colin Powell in May in Damascus, indicated that his government had closed certain offices of Palestinian militant groups. However, last weekend, U.S. National Security Adviser Condoleezza Rice said that "there is much more that Syria needs to do, and that message is being communicated to them."

The base was financed by Iran and used by several terrorist organizations, including Hamas and Islamic Jihad, said Raanan Gissin, adviser to Israeli Prime Minister Ariel Sharon.

Syria, the only Arab member on the 15-member Security Council, requested the meeting in its protest to Annan and the current council president, the United States.

Undated footage of the camp, taken from Iranian TV and released by the Israeli military Sunday, shows a military officer conducting a tour of the camp. Hundreds of weapons, including grenades with Hebrew markings apparently captured from Israel, were displayed in one room. Another scene showed underground tunnels packed with arms and ammunition.

Israel, which accuses Syria of harboring and funding Islamic Jihad, said it would strike at militants anywhere in the region. Avi Pazner, a government spokesman, said that any country harboring terrorists "will be responsible to answer for (its) actions."

Gissin said the air strike was a measured response. "We did not attack Syrian targets, but very specific camps used to train the terrorists," he said.

Leaders of both Islamic Jihad and Hamas live in Damascus.

However, in an understanding with the Syrian government, they have been careful in recent months to issue statements and give interviews only from nearby Lebanon, to avoid the impression that they still operate from Damascus.

Western diplomats say that despite Syrian denials, Hamas and Islamic Jihad leaders in Syria continue to give directions to the groups' members in the West Bank and Gaza. The diplomats say Syria is loathe to be seen as betraying the Palestinian cause, and it also does not want to give up one of the few bargaining chips it still has in negotiations with Israel.

Saturday's bomber was trainee lawyer Hanadi Jaradat from the West Bank town of Jenin. Jaradat, 27, whose brother and a cousin, both militants, were killed in an Israeli army raid in June, blew herself up in the Maxim Restaurant in the northern Israeli port city of Haifa.

She killed herself and 19 bystanders, including four children and four Arabs, and wounded 55 people. Overnight, Israeli troops demolished the Jaradat family home in line with army practice.

"We urge all sides to exercise restraint and to keep in mind the consequences of their actions," the U.S. State Department said in a statement. K — Egypt, Jordan and Lebanon — three Arab countries border Israel — condemned the air strike. "This is an aggression on an Arab brotherly country," said Jordanian Foreign Minister Marwan Muasher. "It can drag the whole region into a circle of violence."

Saturday's bombing raised the possibility that Israel might make good on a threat to "remove" the Palestinian leader. Sharon has hinted he might take such action, approved in principle last month, in response to a major attack with many Israeli casualties.

However, the United States opposes expelling Arafat, and it appears Sunday's air strike was chosen as an alternative response, at least for now. It was dramatic enough to satisfy the Israeli public's demand for retaliation, but was unlikely to endanger Israel's ties with Washington.

The last attack in Syria appeared to be in November 1985, when Israeli warplanes flying over Lebanon pursued Syrian fighter planes into Syrian airspace and shot them down.

On April 16, 2001, Israeli warplanes blasted a Syrian radar station in Lebanon, where Syria is the main power broker, killing three Syrian soldiers. That strike came in retaliation for an attack by Syrian-backed guerrillas in which an Israeli soldier was killed.