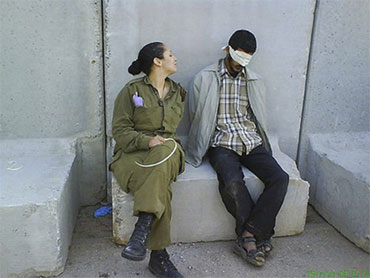 A former Israeli soldier posted photos on Facebook of herself in uniform smiling beside bound and blindfolded Palestinian prisoners, drawing sharp criticism Monday from the Israeli military and Palestinian officials.

Israeli news websites and blogs showed two photographs of the woman. In one, she is sitting legs crossed beside a blindfolded Palestinian man who is slumped against a concrete barrier. His face is turned downwards, while she leans toward him with her face upturned. Another shows her smiling at the camera with three Palestinian men with bound hands and blindfolds behind her.

The incident was a reminder of the fraught relations between Israeli soldiers and the West Bank Palestinians under their control.

Israeli soldiers have run into trouble on the social media sites like Facebook and YouTube before. Most recently a group of combat soldiers were reprimanded for breaking into choreographed dance moves while on patrol in the West Bank town of Hebron. The dance featured prominently on YouTube.

Palestinian Authority spokesman Ghassan Khatib condemned the photos and said they pointed to a deeper malaise - how Israel's 43-year-old occupation of Palestinians has affected the Israelis who enforce it.

"This shows the mentality of the occupier," Khatib said, "to be proud of humiliating Palestinians. The occupation is unjust, immoral and, as these pictures show, corrupting."

The Israeli military also criticized the young woman, who Israeli news media and bloggers identified from her Facebook page as Eden Aberjil of the southern Israeli port town of Ashdod. No official confirmed her identity.

"These are disgraceful photos," said Capt. Barak Raz, an Israeli military spokesman. "Aside from matters of information security, we are talking about a serious violation of our morals and our ethical code and should this soldier be serving in active duty today, I would imagine that no doubt she would be court-martialed immediately," he told Associated Press Television News.

It was not clear whether the army could punish the woman, because she has finished her compulsory military service.

The comments by the woman and her friend in an exchange below one photograph suggested how casually the picture was treated, including jokes and sexual innuendoes.

"I wonder if he's got Facebook!" the woman in the photograph responded. "I have to tag him in the picture!"

Aberjil did not respond to reporters' questions Monday.

The photographs were a reminder of snapshots taken in 2003 by American soldiers at Abu Ghraib prison in Iraq that showed Iraqi detainees naked, humiliated and terrified. In that case, some soldiers went to prison after the photos came to light.

The photographs of the Israeli soldier and the Palestinians, by contrast, show no overt physical abuse or coercion of the prisoners, although they are ridiculed in the comments between the soldier and her friends.

Palestinians are routinely handcuffed and blindfolded when they are arrested to stop them from trying to flee.