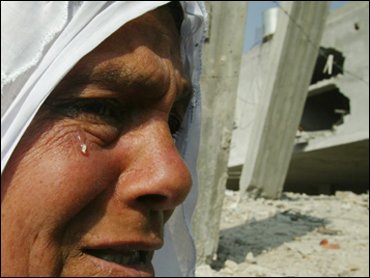 Israeli troops pulled back to the edges of a Palestinian town in the Gaza Strip on Tuesday, despite five suicide bombings that killed 12 Israelis in 48 hours and endangered a U.S.-backed Mideast peace initiative.

It was the first time Mr. Bush has ever spoken with Abbas. Ari Fleischer says Mr. Bush also held out the possibility of an eventual meeting with Abbas.

Meanwhile, White House spokesman Ari Fleischer says Mr. Bush reiterated his commitment to the security of the state of Israel.

Fleischer also said an effort to reschedule a meeting between President Bush and Israeli Prime Minister Ariel Sharon before the president's May 29 departure for Europe is "not in the cards," but Fleischer would not rule out a Bush-Sharon meeting somewhere in Europe.

The pullback from Beit Hanoun in northern Gaza suggested Israel is holding off on large-scale retaliation for now, amid international concern that new strikes would further weaken Abbas, the new Palestinian prime minister.

In a related story, Abbas on Tuesday denounced suicide bombings and appealed to Palestinian militant groups to halt the violence, but said his government will not clash with the factions.

"We understand we have to sit around the negotiating table, we understand that there is no military solution to this conflict," said Israeli government spokesman Mark Sopher.

Abbas is seen as instrumental in implementing the "road map" to peace plan, a three-stage prescription for ending violence and setting up a Palestinian state by 2005. However, Abbas has said he will not launch a crackdown on militias — a crucial step in the first phase — until Sharon accepts the plan.

Sharon has refused to do so, saying he wants to discuss his objections with President Bush. A Bush-Sharon meeting had been scheduled for Tuesday, but Sharon postponed his Washington trip indefinitely because of the bombings.

Mr. Bush remained confident the peace plan can be implemented. "But it is clear that the process is not going to be smooth so long as terrorists kill," he said Monday.

The Israeli-Palestinian deadlock has left the field to the militants who are trying to torpedo the peace efforts and weaken Abbas. In the past, the Islamic militant groups, including Hamas and Islamic Jihad, have stepped up attacks whenever there was increased hope of progress toward peace.

An Islamic Jihad in the West Bank said militants needed no special incentive to carry out attacks. "It's all-out war," said the leader, Sheik Bassam Sadi. "We will only stop if we feel our people are getting tired."

In the latest bombing, a Palestinian woman, 19-year-old Hiba Daraghmeh, blew herself up at a back entrance of a shopping mall in the northern Israeli town of Afula on Monday. Daraghmeh detonated the explosives as she approached security guards checking shoppers.

The blast killed three Israelis, including a guard, and wounded 47.

Daraghmeh was a 19-year-old English literature student from the West Bank village of Tubas and was a devout Muslim, covering her face with a veil in addition to the headscarf customary among observant Palestinian women.

Islamic Jihad and the Al Aqsa Martyrs' Brigade, a militia linked to the ruling Fatah party, claimed joint responsibility. Daraghmeh apparently was recruited by Al Aqsa, while Islamic Jihad, which gets money from Iran, provided the funding, militia members said, speaking on condition of anonymity.

Israeli troops detained Daraghmeh's parents, relatives said, and Israel Radio said the two were taken to Israel's forensics institute to identify their daughter's body. The family emptied its home of belongings, expecting that it would be demolished — in line with the military's practice for the past year.

Abbas has said he wants to disarm militias through dialogue, not force — an approach Sharon has brushed aside, saying he wants to see arrests and weapons sweeps.

Abbas, who took office April 30, issued a strong condemnation of the Afula bombing, saying it "contradicts our moral values and tradition and only feeds into the hatred of the two peoples." However, Israeli's military operations "contribute to the surge of violence," Abbas added.

The latest string of attacks began Saturday evening, just before a Sharon-Abbas meeting, the first Israeli-Palestinian summit since the outbreak of fighting.

Residents said the military demolished 15 houses, uprooted thousands of trees, damaged the water and sewage systems. The military would not comment on the scope of destruction, but said homes and orchards were targeted because militants had been hiding there.

In his meeting with Abbas, Sharon had raised the possibility of withdrawing troops from several Palestinian towns, including Beit Hanoun, as a test case. Palestinian security forces would take control there and restore order. Abbas turned down the offer, saying Sharon would first have to accept the road map.