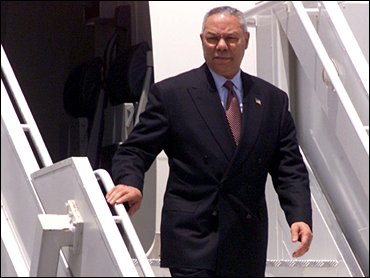 Israel sealed the Gaza Strip on Monday, imposing the most sweeping restrictions in years, and its troops killed three Palestinians in clashes there, as Secretary of State Colin Powell wound up a Mideast mission.

Powell had asked the Israeli and Palestinian prime ministers to move on the "road map" peace plan; Palestinians are expected to rein in militants, and Israel is to ease restrictions that have caused severe hardships for Palestinians through 31 months of fighting.

However, the visit ended without visible results. The Palestinians were disappointed with Powell's visit, reports CBS News Correspondent Robert Berger. They feel he pressured them to fight terrorism, but didn't push Israel to withdraw from parts of the West Bank.

"We're willing to carry out all our obligations, in parallel with the Israeli obligations," said Cabinet Minister Saeb Erekat. "We don't have an Israeli response."

Israeli Prime Minister Ariel Sharon has expressed major reservations to the plan, and was to air them in a meeting next week with President Bush. Before leaving for Washington, Sharon was to meet with his Palestinian counterpart, Mahmoud Abbas, in what would be the highest-level talks between the two sides in nearly three years.

Powell was turning to Egyptian President Hosni Mubarak Monday for help in improving Palestinian security forces in an attempt to encourage Israel to move ahead on a U.S.-backed blueprint for peacemaking.

Powell also would like Egypt to encourage development of reform within the Palestinian Authority and oppose armed groups trying to disrupt the peace process, a senior State Department official said.

After his meetings with Mubarak and other Egyptian officials, Powell takes the same message to Jordan later Monday and to Saudi Arabia on Tuesday.

On Sunday, Israel lifted a closure on the West Bank and Gaza, allowing several thousands of Palestinians to return to jobs in Israel, while continuing to enforce travel restrictions between towns.

But on Monday, the military barred Palestinians and all foreigners, with the exception of diplomats, from leaving and entering the coastal strip of Gaza.

The open-ended travel ban marks the first time in years that foreign nationals, including journalists, are being kept out of Gaza for an extended period.

"We've never seen anything like this," said Paul McCann, a spokesman for the United Nations Relief and Works Agency, which assists hundreds of thousands of Palestinian refugees.

McCann said UNRWA's operations were being hampered considerably, adding that "this morning, we couldn't even get our diplomatic pouch out."

The restrictions were imposed three days after the military announced that foreigners must sign security waivers as they enter Gaza and promise to stay away from "combat areas."

Human rights groups have accused the army of trying to prevent monitoring of Israel military actions against Palestinians.

The new rules were announced after two Britons traveled from Gaza to Tel Aviv, where one of the Britons blew himself up at a pub on April 30, killing three Israelis. His accomplice remains at large.

In tightening restrictions, the military also referred specifically to keeping out members of the International Solidarity Movement, a pro-Palestinian group that has sent foreign volunteers to trouble spots to serve as buffers between troops and Palestinian civilians. Dozens of activists have been deported by Israel.

In a firefight Monday in the Gaza town of Rafah, Israeli soldiers killed two Palestinian gunmen, Palestinian security sources said. The army said the two men were killed as they planted bombs near Israeli troops.

In nearby Khan Younis, troops killed a Palestinian farmworker as he tilled a field near an Israeli army lookout post, witnesses said. The military had no comment.

In the first sign that a thaw might be developing, Israeli Maj. Gen. Amos Gilad met over the weekend with Mohammed Dahlan, minister in charge of security in the Palestinian Cabinet. Such contacts were a key element of interim peace accords but were suspended because of the violence, Israel Radio said.