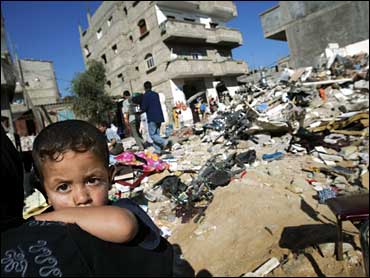 Under U.S. and international pressure, Israel began scaling back a deadly operation in the Gaza Strip Friday.

Israel pulled most of its tanks and troops out the Rafah refugee camp, after a three-day sweep that left some 40 Palestinians dead, reports CBS News Correspondent Robert Berger. A smaller force will remain to search for weapons smuggling tunnels. About 100 Palestinian homes were destroyed.

The army said no tunnels have been found so far and only one Palestinian was arrested after soldiers questioned hundreds. Security officials believed most of the fugitives fled before the invasion.

The army said it deliberately demolished seven homes, including one belonging to an Islamic Jihad militant. Other damage to homes and roads was caused by heavy military vehicles and Palestinian militant roadside bombs, the army said.

In many cases, the facades of houses caved in or were shorn off — damage from wide armored vehicles moving through the narrow alleys.

"This occupation is not only ruthless but is bent on wreaking havoc," said Palestinian legislator Hanan Ashrawi.

Residents rummaged through the rubble, retrieving mattresses, photo albums, shoes and clothing. A preschool boy, oblivious to his surroundings, sat on the ground, scooping up sand with a broken toy bulldozer.

"No one in the Palestinian Authority is concerned with their fate," said Israeli army spokeswoman Sharon Feingold. "Rather, there's more concern about the continuing of the smuggling of arms and ammunition" which she called "a conglomerate of terror."

Israeli troops left behind leaflets in Arabic, urging residents not to give shelter to armed men "who are using your homes and are hiding inside like rats."

Yacoub Othman, 55, a resident of the Brazil neighborhood, said he was hit by random fire in the leg as he walked down the stairs in his home Wednesday, but couldn't get medical help.

"I tried to sterilize the wound with the little alcohol we had at home, but I couldn't even open the window and call on my neighbor to call for an ambulance because the snipers were right in front of us and the bulldozer was working in the street in front of us," said Othman. Doctors said Othman's wound became infected.

Reporters were still unable Friday to get into the hardest-hit neighborhood, Tel Sultan, where residents lost water and electricity for part of the Israeli offensive.

United Nations officials said several water trucks were able to reach the area Friday, negotiating torn-up roads to bring fresh supplies to some of the 25,000 residents.

"It's quite wild — the trucks are being mobbed by the locals, who have been without supplies for such long time," said U.N. spokesman Johan Eriksson.

Abdel Rahim Abu Jazer, 42, a teacher, searched for food and water for his children "I hardly recognized my own street," he said. "I don't think an earthquake could do what the Israeli army did to this area."

Israeli security officials said the offensive would continue. A key objective remains the widening of an Israeli patrol road between Rafah and the Egyptian border, which would make it more difficult for weapons smugglers to dig tunnels.

The widening of the road would require the demolition of dozens of Palestinian homes, said a security official, who spoke on condition of anonymity. Palestinian officials estimate that hundreds of houses would be razed if the road is widened.

Israel's vice premier, Ehud Olmert, assured Secretary of State Colin Powell in a meeting in Washington earlier this week that the buffer zone would not be widened, U.S. officials said. However, Israeli security officials said Friday the army is still pushing for an expansion of the zone by at least 300 yards.

Israeli Attorney General Meni Mazuz instructed the army on Thursday to come up with alternatives that cause less destruction. He said even the latest proposal would not hold up in local and international courts, officials said.

Israel launched "Operation Rainbow" on Tuesday, less than a week after 13 soldiers were killed by militants in the Gaza Strip.

The United States, European Union and United Nations have harshly criticized the operation, calling for a halt to home demolitions. U.S. criticism was unusually sharp, and in a rare move the administration allowed the passage of a stinging U.N. resolution condemning the operation.

Israel's top court Friday heard a petition by four Israeli human rights organizations against the alleged denial of adequate medical services by the army in Rafah and other human rights violations since the beginning of the operation.

The army denied it was preventing ambulances and medicine from entering the refugee camp.

Some 5,000 Palestinian protesters chanted anti-Israeli slogans in Jabaliya refugee camp near Gaza City, a stronghold of the militant group Hamas, as Hamas and Islamic Jihad vans collected mattresses, blankets and other supplies for the residents of Rafah.

During more than three years of Palestinian-Israeli violence, Israeli forces have made dozens of forays into the Rafah camp to destroy weapons-smuggling tunnels. The Israeli military said 90 have been found and destroyed. More than 11,000 Rafah residents were made homeless by Israeli demolitions since 2000.

Israel charges that Palestinian militants have weapons stockpiled in the Egyptian Sinai desert across from Gaza, waiting to be smuggled in. Egypt has denied the charges.