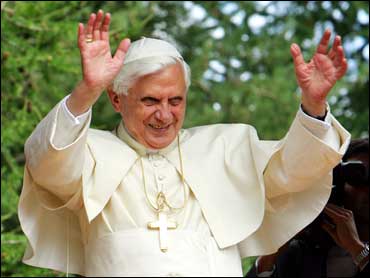 The Israeli Foreign Ministry expressed its outrage Monday that Pope Benedict XVI "deliberately failed" to condemn terror attacks against Israelis, and it summoned the Vatican envoy to a meeting.

On Sunday, the pontiff prayed for God to stop the "murderous hand" of terrorists. He made the noontime blessing from his Alpine retreat in Italy's northwestern Valle d'Aosta region, where he is vacationing.

Benedict referred to the recent "abhorrent terrorist attacks" in Egypt, Britain, Turkey and Iraq but did not mention attacks in Israel.

"We expected that the new pope, who on taking office emphasized the importance he places on relations between the Church and the Jewish people, would behave differently," the statement said.

The statement called on the pope to condemn attacks "against Jews in the same way he condemns terror attacks against others."

Benedict said Monday he did not see an anti-Christian motive in the recent wave of terrorist attacks blamed on Islamic extremists, attributing them instead to "a much more general intention."

The pontiff also told reporters while vacationing in the Italian Alps that it was important to seek dialogue with the best elements of Islam.

After visiting a church, Benedict brushed off a question about whether he believed Islam was a religion of peace.

"I wouldn't want to label (it)," he said. "Certainly there are elements that favor peace. It also has other elements."

The pope's spokesman said Sunday that Benedict was placing immense importance on a meeting with Muslims in Cologne, Germany, while he is in his homeland next month to lead the Roman Catholic Church's World Youth Day.

Benedict has been in Les Combes since July 11 and is due to remain until July 28, when he will move to the papal summer retreat in Castel Gandolfo in the Alban hills south of Rome.

During his vacation, he is finishing a book he started three years ago and working on his first encyclical.