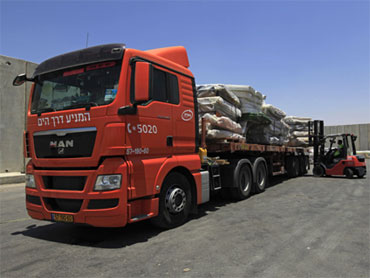 Israel is easing its blockade of Hamas-ruled Gaza to allow in virtually all consumer goods, items from household cleaners to timber that had been barred from import for years.

But because Israel will continue to ban most travel and exports and restrict the import of desperately needed construction materials, the new rules are unlikely to restore the territory's devastated economy or allow rebuilding of all that was destroyed in last year's war.

The White House welcomed the changes that were announced Monday as Prime Minister Prime Minister Benjamin Netanyahu flew to Washington for a meeting with President Obama. International Mideast envoy Tony Blair said Israel's measures "should have a dramatic influence on the daily lives of the people of Gaza and on the private sector."

Obama Netanyahu will head into the White House Tuesday with the same stated goal: to move the Israelis and Palestinians to resume face-to-face peace talks.

Analysis: Obama, Netanyahu Will Learn They Need Each Other

Netanyahu on Sunday endorsed the U.S. call for direct talks between the two parties, just days after White House officials said Obama would push during the Oval Office session for those negotiations to get under way sooner rather than later.

Addressing his cabinet on Sunday, Netanyahu said the "time has come" for Palestinian President Mahmoud Abbas to get ready to meet with the Israelis "because there is no other way to advance peace… I hope this will be one of the results of the visit to Washington."

Aides to Obama have told reporters that weeks of shuttle diplomacy between the two sides by George Mitchell, Obama's special envoy to the Middle East, had paid off and "the gaps have narrowed."

"We believe there are opportunities to further narrow those gaps, to allow the sides to take that next step to direct talks," added Daniel Shapiro, the senior Middle East director at the National Security Council.

The new blockade rules come in response to an outcry following a deadly Israeli raid on a blockade-busting flotilla at the end of May.

Gaza business leaders and rights activists said the measures are far short of what Gaza needs, and that the only active cargo crossing, Kerem Shalom, may not be enough to bring in all the goods now permitted.

Israeli officials said the remaining restrictions, including on exports, are essential for maintaining security.

On Monday, goods dropped off at Kerem Shalom included washing machines, which were previously banned from import. Aid supplies that had been transported on the intercepted flotilla also found their way to the crossing, including previously banned mattresses.

Israel started restricting movement of people and goods in and out of Gaza after the 2006 capture of an Israeli soldier, Sgt. Gilad Schalit, by Hamas-allied militants. A year later, when the Islamic militant Hamas overran Gaza, Israel - backed by Egypt - imposed a fuller closure, allowing in only a few dozen types of humanitarian goods like basic foods and medicine.

Israel says it will lift the blockade if Hamas releases the soldier, recognizes Israel and renounces violence. Hamas, which is considered a terror organization by the U.S., Israel and the European Union, has rejected those terms.

Obama, who is hosting Netanyahu at the White House on Tuesday, has said the blockade is unsustainable and demanded that it be eased significantly. Other world leaders have asked for a complete lifting of the border closure.

White House spokesman Tommy Vietor said Monday that the new procedure "will make a significant improvement in the lives of people in Gaza, while keeping weapons out of the hands of Hamas."

Israel said Monday that it began easing restrictions in the last two weeks and will continue to implement changes over the coming weeks. It published a list of goods it will continue to ban from Gaza, with everything else now permitted.

The banned items include weapons and "dual use" goods Israel fears might be diverted by Gaza militants for military purposes, such as fertilizers, gas tanks, drilling equipment and water disinfectant.

Construction materials such as cement, steel cables and concrete blocks will be permitted into Gaza only for projects supervised by international aid agencies. The internationally funded construction of schools, sewage treatment plants and housing projects in Gaza has largely been on hold since 2006, but Israeli officials promised to work quickly now to deliver the supplies.

Aid groups estimate than Gaza needs another 86,000 housing units - mostly to account for population growth, but also to replace thousands of apartments that were destroyed during last year's Gaza war and previous Israeli military offensives.

Israel has made a serious effort to make a "very clear distinction between the security needs of Israel, that we are committed to keep, and everything else," said Yossi Gal, director general of Israel's Foreign Ministry.

However, Sari Bashi of the Israeli human rights group Gisha said the benefit to Gaza will be limited.

"Gaza residents can now purchase Israeli-made products, but they are still prevented from engaging in dignified, productive work and from traveling," she said.

Gaza, a strip of land 6 miles wide and 25 miles long and populated by 1.5 million Palestinians, has been occupied by Israelis since the 1967 Mideast war. Israel withdrew from the territory in 2005, almost two years before the Hamas takeover. Israel closely regulates what goes in and out in an effort to weaken the group and prevent it from receiving weapons and explosives.

All goods will be funneled through Kerem Shalom, Israel's main cargo crossing into Gaza, and Israel does not plan to reopen additional passages it used before the blockade.

Kerem Shalom consists of three paved lots, each ringed by walls of cement slabs, as well as one opening to the Israeli side and another to the Gaza side.

In the morning, Israeli trucks unload the goods in the paved areas, then withdraw back to Israel. Once the Israelis have cleared out, Palestinian truckers arrive from the Gaza side to pick up the merchandise. Israel instituted the measures as a result of attacks by Palestinian militants on the crossing.

In recent weeks, about 140 truckloads a day have passed through the crossing, but Israel hopes to increase the volume to about 250 in coming weeks, said Maj. Gen. Eitan Dangot, the top liaison officer with the Palestinians. Gisha, the human rights group, said that even at the expanded capacity Kerem Shalom could supply only about 70 percent of Gaza's daily needs.

The ban on the import of raw materials and exports forced most of Gaza's 3,900 factories to shut down, wiping out tens of thousands of jobs. Raw materials not on the banned list will now be allowed to enter Gaza, but exports will continue to be banned, with the exception of small seasonal shipments of strawberries and flowers.

In justifying the export ban, Israel points to a suicide bomber who blew himself up in an Israeli port after hiding between the double walls of a shipping container to get there.

Israel permits several hundred Gazans to leave the territory each month, most of them seeking medical treatment in Israel or abroad. Another restricted group can leave via Egypt, which eased travel after the flotilla clash. However, the vast majority of Gazans remain confined to the territory.

The family of Schalit, meanwhile, has renewed its campaign for the soldier's release. Around 15,000 Israelis marched through Tel Aviv on Monday, snarling traffic in the country's economic center, calling on their government to conclude a prisoner swap deal for Schalit.

Later in the day, internationally renowned conductor Zubin Mehta held a symphony concert for Schalit near the Gaza border, and asked Hamas to allow the Red Cross to visit the soldier for the first time.

"We hope and we pray that the music will inspire people on the other side to open their hearts," Mehta told the audience of thousands.