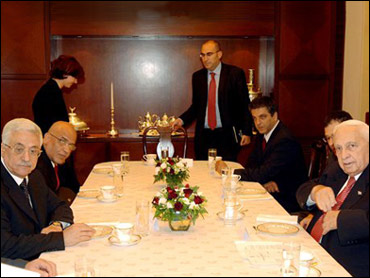 Sharon, meeting Abbas in a summit in Jerusalem, also said Israel would allow the return of some deportees to the West Bank and to consider releasing more Palestinian prisoners, all in exchange for increased Palestinian efforts to rein in militants, said the officials.

After Palestinian militants declared an informal cease-fire early this year, Israel agreed to go after only those on the brink of carrying out attacks.

But with Islamic Jihad stepping up its activities this week, killing two Israelis, the military decided it will no longer limit its operations to "ticking bombs," but will go after anyone affiliated with the group, said Lt. Col. Erez Winner, a senior Israeli commander in the West Bank.

"We operated against this group in a restrained manner," he said, both to preserve the calm and because many members of Islamic Jihad were hiding in Tulkarem, a West Bank town that Israeli handed over to Palestinian police as part of the cease-fire.

But "Islamic Jihad has taken itself absolutely out of the (cease-fire) agreement with its attacks, and so from our view, we are operating fully against them, as we did before," Winner said. "Anyone we know who is affiliated with this organization is a legitimate target."

He said he didn't foresee more mass arrests, because the overnight sweep netted many of the militants Israel has been watching.

Khadr Adnan, an Islamic Jihad spokesman in the West Bank, said if the Palestinian Authority and Egypt, which brokered the cease-fire declaration, don't take action to ensure Israeli commitment to the truce, "then we will consider ourselves to be outside (it), and will call upon all Palestinian factions to do the same."

Islamic Jihad is the smaller of the two main militant groups in the Gaza Strip and West Bank. In addition to this week's violence, the group carried out the deadliest single attack since the truce declaration, a Feb. 25 bombing of a Tel Aviv nightclub that killed five Israelis.

The larger militant group, Hamas, has been relatively quiet as it tries to cement a political following ahead of Palestinian legislative elections later this year.

Palestinian official Saeb Erekat said the Palestinian attacks and Israeli arrests endangered the cease-fire, and "have really cast a dark cloud over the summit."

"I want to condemn the cycle of violence that preceded the anticipated summit today," Erekat said. "The Israeli arrests this morning will not add anything to sustaining the quiet."

The Abbas-Sharon meeting followed a visit to the region just a few days ago by Secretary of State Condoleezza Rice, who tried to bolster prospects for a successful Sharon-Abbas meeting and a peaceful pullout.