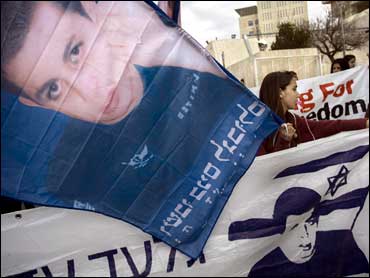 Top Israeli Cabinet ministers opened debate Wednesday on a proposal for a sweeping cease-fire deal with Hamas militants in the Gaza Strip, seeking to deliver quiet to the country's south and bring home a captive soldier before the government leaves office in the coming weeks.

The emerging deal would require Israel to make major concessions, including an opening of Gaza's blockaded borders and releasing hundreds of Palestinian prisoners. In return, Israel is seeking an end to all rocket fire on southern Israel, a halt to arms smuggling into Gaza and the freedom of Sgt. Gilad Schalit, an Israeli serviceman captured by Hamas nearly three years ago.

Wednesday's meeting was expected to last for hours and given the complexity of the situation, one participant said the government might not even make a decision on all issues.

"I think hopes have been raised just a little too high ahead of this Cabinet meeting," Social Welfare Minister Isaac Herzog told Army Radio. "We shall examine what is the current status of the truce and the intensive efforts to free Gilad Schalit, where things stand and what are the parameters."

Participants arriving at the meeting went into the closed session without commenting to reporters.

Once Israel makes its decision, it will share its position with Egypt, which has been trying to broker a lasting cease-fire between Israel and Hamas in the wake of last month's punishing Israeli military offensive in Gaza. The operation ended with an informal truce on Jan. 18.

Hamas' deputy leader told CBS News George Baghdadi on Sunday that a peace deal was within reach, stating that the agreement would include the reopening of boarder crossings and refusing to rule out the possibility that Hamas would free Shalit. (Click here to read the story in World Watch.)

Israeli Prime Minister Ehud Olmert is eager to work out a deal before leaving office. The country held a parliamentary election last week.

The results were inconclusive and it is expected to take several weeks before either of the top two vote-getters, Foreign Minister Tzipi Livni or opposition leader Benjamin Netanyahu, can form a new coalition government.

CBS News correspondent Robert Berger reports that President Shimon Peres opened talks Wednesday with Israel's main political parties on who will form the next government. Depending on their recommendations, he will choose between Livni and Netanyahu. Livni's dovish Kadima party won one more seat in the Knesset than Netanyahu's Likud, but he has the upper hand because the right wing bloc has a majority in parliament.

Although Olmert would like to leave a clean slate to his successor, he has toughened his negotiating position in recent days, saying that Gaza's borders will only be fully opened when Schalit comes home safely.

"We will negotiate his release first, and only then will we be willing to discuss things like the Gaza crossings and rebuilding the (Gaza) Strip," Olmert said Tuesday, warning a deal may not be completed before his term ends.

"Even if Schalit's case cannot be resolved while I am in office, the foundations we built will facilitate in his release," he said.

Israel and Egypt clamped a blockade on Gaza after Hamas overran the crowded sliver of territory in 2007, allowing in little more than basic humanitarian supplies.

The blockade has caused widespread hardship in Gaza, particularly after the Israeli military offensive. Dire shortages of cement, glass and other building supplies make reconstruction virtually impossible until the borders reopen.

Reopening the border is the top priority of the Hamas government. Speaking at his headquarters in Syria, Hamas' exiled leader, Khaled Mashaal, complained about Olmert's conditions.

"There can be no truce unless the (Gaza) blockade is lifted and the crossings are opened. The truce issue should not be linked to the issue of prisoner Schalit," he said Tuesday.

At stake in the truce talks is stabilizing Gaza after Israel's offensive, which aimed to stop years of Hamas rocket attacks on southern Israel. Some 1,300 Palestinians were killed, more than half of them civilians, according to Gaza health officials. Thirteen Israelis, including three civilians, were also killed.

While the fighting as largely stopped since the informal cease-fire agreements took effect, Berger reports that Israeli warplanes bombed smuggling tunnels in Gaza on Wednesday, retaliation for Palestinian rocket attacks. The army said about 50 rockets and mortars had been fired at Israel since the Gaza war ended a month ago.

Hamas wants hundreds of Palestinian prisoners released in exchange for the captured soldier, including some convicted of participating in or planning some of the bloodiest Palestinian attacks against Israel. The prospect of notorious killers going free has provoked heated debate in Israel and could delay the deal as the government sifts through the list of prisoners Hamas wants freed.

Since the fighting ended, there has been sporadic rocket fire from Gaza, triggering Israeli air strikes aimed at smuggling tunnels and Hamas outposts.

Early on Wednesday, Israeli aircraft struck smuggling tunnels under the Gaza-Egypt border and a Hamas security base near the town of Khan Younis, local Palestinian security officials said.

They said the Hamas base had already been largely reduced to rubble in previous air attacks, but this time a mosque left standing inside the compound was destroyed. There were no reports of casualties.

The Israeli military said aircraft hit seven tunnels and the Khan Younis base in response to the Palestinians firing 45 rockets and mortar shells since the Jan.18 cease fire.

Later in the morning a rocket fired from Gaza fell in open ground in southern Israel, police said. There were no reported casualties.