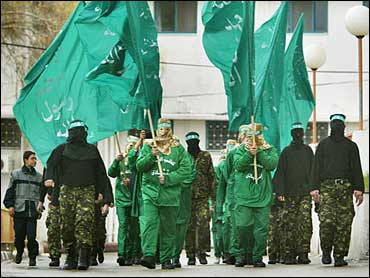 Israeli soldiers killed a top Hamas fugitive in a roadside ambush Monday, and in a separate operation, raided a stronghold of the militant Islamic group, shooting dead two Palestinians and blowing up the house of a suspected bombmaker.

The two Israeli strikes came in response to a deadly Hamas attack on an Israeli tank over the weekend. Israel said it will intensify its hunt for Hamas militants, who have carried out many of the bombings and other attacks against Israeli targets in the past 29 months of fighting.

The Hamas fugitive, Riyad Abu Zeid, 32, was shot and seriously wounded when undercover troops, hiding in a van loaded with vegetables, fired on his black Honda traveling along Gaza's coastal road, witnesses said. Troops apprehended Abu Zeid, who died on the way to an Israeli hospital, the military said.

A Palestinian taxi driver, who gave only his first name, Mohammed, said there were two Palestinian men in the Honda, both taken away by the Israeli military. One man — Abu Zeid — apparently was killed at the scene, the other injured, he said.

The identity of the second man was not immediately known.

The army described Abu Zeid, 32, as a senior member of Hamas' military wing who had organized attacks against Israeli targets in the Gaza Strip and suicide bombings inside Israel. He was planning additional attacks, the army said in a statement, without giving details.

Israeli Defense Minister Shaul Mofaz said Sunday that troops would strike harder against Hamas, including with targeted attacks on militants. On Saturday, Hamas activists set off a roadside bomb in Gaza that hit a tank and killed four soldiers.

"There will be no immunity, there will be no sanctuary, not in Gaza … not in any other place," said Raanan Gissin, an aide to Israeli Prime Minister Ariel Sharon.

The Israeli daily Haaretz said troops were poised for a major strike in Gaza, but will stop short of reoccupying the strip of more than 1 million Palestinians.

In all, 14 Palestinians were killed in the West Bank and Gaza Strip during a 24-hour period from midday Sunday to midday Monday, including six Hamas members who died in an unexplained explosion Sunday.

The fresh violence erupted amid new efforts to negotiate a cease-fire and resume peace talks.

Israel and the Palestinians sent delegations to London on Monday to meet with members of the so-called Quartet of Mideast mediators — the United States, the European Union, the United Nations and Russia — who are trying to draft a plan to end the fighting and establish a Palestinian state.

Israeli officials did not rule out the possibility that Israeli and Palestinian delegate would meet in London, the first such meeting in many months.

In the other Israeli military operation in Gaza, about 35 tanks, escorted by helicopter gunships, entered the Sheik Radwan neighborhood in Gaza City early Monday morning.

Troops ordered everyone out of the targeted building and adjacent homes and took the men away, witnesses said. Then soldiers sent dogs inside to see if anyone was still there. Neighbors were ordered to leave their windows open to help absorb the shock of the explosion as they blew up the house, the witnesses said.

During the five-hour operation, Palestinian gunmen attacked Israeli soldiers, who returned fire. A Palestinian policeman and a suspected militant were killed, hospital officials said. Five civilians, including a doctor, were wounded, the officials said.

Israel has been blowing up houses of suspected militants for several months in an attempt to deter militants from attacking Israelis. Palestinians and human rights groups charge such actions violate international law and constitute collective punishment.

On Sunday, six Hamas activists, including an aide to another top bombmaker, Mohammed Deif, were killed in an explosion in another part of Gaza City. It remained unclear Monday whether the blast was caused inadvertently by militants handling explosives or whether Israel targeted the group.

Hamas said in a statement that the six were killed when a small remote-control plane they were testing blew up. The group blamed Israel for the explosion, but did not give evidence. A number of militants have been killed while building bombs. The Israeli military declined comment.

Gissin said Israel has been aware for some time that Hamas is trying to use such a plane, or drone, to carry out an attack.

A Hamas leader, Abdel Aziz Rantisi, said Monday his group would retaliate for the deaths of the six activists. "The crime against our fighters will not pass without … punishment from Hamas and the Palestinian people," he said.