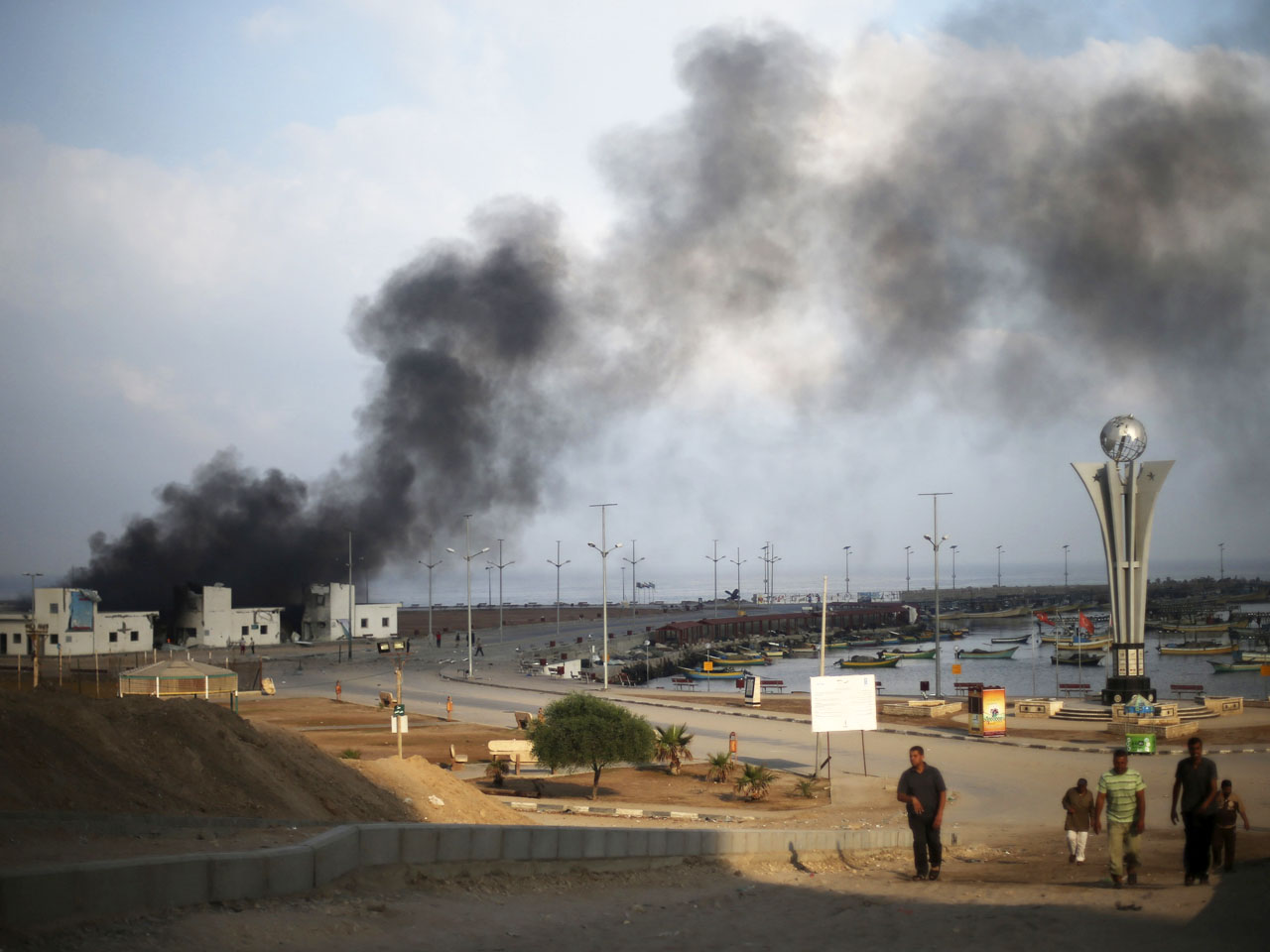 GAZA CITY, Gaza Strip -- Israel unleashed its heaviest air and artillery assault of the Gaza war on Tuesday, destroying key symbols of Hamas control, shutting down the territory's only power plant and leaving at least 128 Palestinians dead on the bloodiest day of the 22-day conflict.

Despite devastating blows that left the packed territory's 1.7 million people cut off from power and water and sent the overall death toll soaring past 1,200, Hamas' shadowy military leader remained defiant as he insisted that the Islamic militants would not cease fire until its demands are met.

The comments by Mohammed Deif in an audiotape broadcast on a Hamas satellite TV channel cast new doubt on international cease-fire efforts. Aides to Palestinian President Mahmoud Abbas said Egypt was trying to bring Israeli and Palestinian delegations together in Cairo for new talks in which Hamas would be presented this time as part of the Palestinian team.

Israel's final objective in Gaza remained unclear a day after Prime Minister Benjamin Netanyahu warned Israelis to be prepared for a "prolonged" war.

Netanyahu is under pressure from hawkish members of his coalition to topple Hamas in an all-out offensive, but has not let on whether he plans to go beyond destroying Hamas rocket launchers, weapons depots and military tunnels used to infiltrate Israel and smuggle weapons.

Dozens of Israeli airstrikes and heavy tank shelling hit areas across Gaza, which was plunged into complete darkness Tuesday night after a strike on its sole power plant set a fuel tank ablaze.

In the sprawling Jebaliya refugee camp in northern Gaza, at least 24 people - 10 of them from the same family - were killed and dozens wounded in a barrage of tank fire, Hamas health officials said.

"It was like an earthquake," Moussa al-Mabhouh, a volunteer for Gaza's Civil Defense, said of the scene. "Roofs collapsed, walls cracked and wounded people everywhere."

In one incident, shrapnel from a strike in Jebaliya hit near a car with U.N. markings, killing an employee of a U.N. aid agency and his brother, and wounding the man's 12-year-old son, said agency spokesman Adnan Abu Hasna.

The strikes came after a day of heavy Hamas-Israeli fighting in which nine children were killed by a strike on a Gaza park where they were playing, according to Palestinian health officials -- a tragedy each side blamed on the other.

One of those killed, reported CBS News correspondent Barry Petersen, was 10-year-old Jamal Eli Yan, whose father, Saleh, is a driver for CBS News. The family was spending Monday together on a day off for Saleh.

Israel has vowed to stop the Hamas rocket and mortar fire that has reached increasingly deeper into its territory and to destroy a sophisticated network of tunnels that have been used by the militants to infiltrate the Jewish state. For its part, Hamas has so far rejected cease-fire efforts unless its demands are met, including a lifting of a punishing blockade.

The rare remarks by Deif, the Hamas military wing's leader, Deif, were broadcast late Tuesday on Al-Aqsa TV, the satellite station of Hamas.

"There is not going to be a cease-fire as long as the demands of our people are not fulfilled," he said.

Deif's voice was recognizable in the audio statement. He has survived repeated Israeli assassination attempts and has operated from hiding for years.

Al-Aqsa also broadcast a videotape it said showed an infiltration by Hamas fighters into Israel on Monday through a border tunnel.

In all, at least 1,229 Palestinians have been killed, including 128 on Tuesday, making it the single deadliest day since the start of fighting on July 8, said Palestinian health official Ashraf al-Kidra. More than 7,000 have been wounded, he said.

The dead included multiple members of at least five families who were pulled from the rubble Tuesday after airstrikes and tank shelling struck their homes, including the mayor of a refugee camp and his 70-year-old father, according to Palestinian health officials and the Palestinian Red Crescent.

Already, the intensity and the scope of the current Gaza operation is on par with an invasion five years ago, which ended with Israel unilaterally withdrawing after hitting Hamas hard.

On Tuesday, Israeli warplanes carried out dozens of attacks, leveling the home of the top Hamas leader in Gaza, Ismail Haniyeh, and damaging the offices of the movement's Al-Aqsa satellite TV station, a central mosque in Gaza City and government offices.

Haniyeh's house, in a narrow alley of the Shati refugee camp, was reduced to rubble but no one was hurt. Residents placed a large framed portrait of Haniyeh atop the wreckage and draped it with green Hamas flags and Palestinian national banners.

Israel has targeted several homes of Hamas leaders but none has been killed - presumably because they have kept a low profile. Haniyeh said in a statement Tuesday that "destroying stones will not break our determination."

The scene at the Gaza power plant after two tank shells hit one of three fuel tanks was daunting and thick black smoke rose into the sky for hours. The station's shutdown further disrupted the supply of electricity and water to the 1.7 million people packed into the narrow Palestinian coastal territory.

"We need at least one year to repair the power plant, the turbines, the fuel tanks and the control room," said Fathi Sheik Khalil of the Gaza Energy Authority. "Everything was burned."

He said crew members who had been trapped by the fire for several hours were evacuated.

This means most of Gaza will now be without power. The lack of electricity will also affect water supplies, since power is needed to operate water pumps.

Lt. Col. Peter Lerner, an Israeli military spokesman, did not comment on the explosion at the plant, but told The Associated Press that Israel's latest strikes signal "a gradual increase in the pressure" on Hamas.

Israel is "determined to strike this organization and relieve us of this threat," Lerner said.

International calls for an unconditional cease-fire have been mounting in recent days, as the extent of the destruction in Gaza became more apparent.

In the West Bank, Yasser Abed Rabbo, the secretary-general of the Palestine Liberation Organization, called for a 24-hour cease-fire and said the offer was made after consultations with Hamas and the smaller Islamic Jihad group.

However, Izzat Rishq, a senior Hamas official in exile, said his group wanted to hear from Israel first.

The largest group in the PLO is Palestinian President Abbas' Fatah movement, Hamas' main political rival. Hamas is not a member.

Despite appeals for a cease-fire, both sides have been holding out for bigger gains.

Hamas has said it will not stop fighting until it wins international guarantees that a crippling border blockade of Gaza will be lifted. Israel and Egypt had imposed the closure after Hamas seized Gaza in 2007, defeating forces loyal to Abbas. Over the past year, Egypt has further tightened restrictions, shutting down hundreds of smuggling tunnels under the Egypt-Gaza border that had provide crucial tax income to Hamas. The closure of the tunnels drove Hamas into a severe financial crisis.

Israel has said it is defending its citizens against attack from Gaza by hitting Hamas rocket launchers, weapons storage sites and military tunnels under the Gaza-Israel border.

Israel said its troops will not leave Gaza until they have demolished the tunnels which have been used by Hamas to sneak into Israel to try to carry out attacks.

Meanwhile, the U.N. refugee agency for Palestinians said it found a cache of rockets hidden inside of one of its schools. It said the school was closed for the summer and was not being used as a shelter.

"We condemn the group or groups who endangered civilians by placing these munitions in our school," agency spokesman Chris Gunness said. "This is yet another flagrant violation of the neutrality of our premises."

It marked the third time since the Gaza war began that the U.N found weapons hidden in one of its schools.

Meanwhile in Washington, Democratic and Republican members of Congress scrambled Tuesday to seal a $225 million boost to Israel's Iron Dome missile defense system before they break this week for a month-long recess.

As the Gaza war escalates, Israel is proving to be among the few subjects uniting lawmakers. Members of both parties have introduced legislation backing the Jewish state, condemning the Palestinian militant group Hamas and seeking a tougher Iran policy. Iron Dome is the priority, but the House and Senate are at odds over process.

Secretary of State John Kerry said Tuesday widespread criticism of his efforts to win a cease-fire between Israel and Hamas don't worry him and said he will continue to work toward that goal because Netanyahu asked him to.

"I have taken hits before in politics, I am not worried about it," he told reporters at the State Department. "This is not about me."

Kerry said he is convinced that a humanitarian cease-fire in Gaza followed by negotiations to resolve the underlying causes of the conflict is "more appropriate" than continuing to wage war.