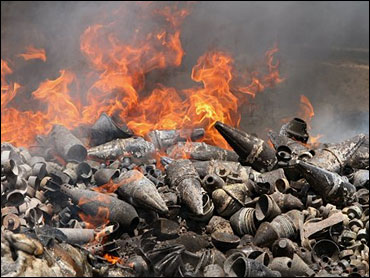 Palestinians dug in behind walls and embankments in the southern Gaza Strip on Wednesday, after Israel sent in troops and tanks to pressure militants to release a captured soldier, while Palestinian officials called for a prisoner swap.

Israeli aircraft hit a power station, knocking out electricity to most of Gaza's 1 million residents, reports . The air force also destroyed three bridges to prevent militants holding the captive Israeli soldier from moving him, and a Hamas training camp. Tanks and troops have also moved in on the ground and have surrounded the southern town of Rafah, near where it's believed Cpl. Gilad Shalit is being held.

Israeli tanks and armored personnel carriers have taken up positions in Southern Gaza, the area where the military believes the kidnapped soldier might be being held. Helicopters were hovering overhead, and more armor was deployed at the border ready to move in.

Knocking down the bridges cut Gaza in two, Palestinian security officials said, and Palestinian negotiator Saeb Erekat said force was not the answer.

"We are still exerting maximum effort in order to locate the soldier, and bring him out alive," he said.

No casualties were reported, although two Palestinians were killed Wednesday when an explosion went off in a house in the town of Khan Younis in the Gaza Strip. The explosion came from inside the house, the witnesses said. One of the dead Palestinians was a young girl, they said.

They did not immediately blame Israel. The Israeli army said it was checking reports about the explosion.

The Hamas-led Palestinian government called for a prisoner swap with Israel, saying the Gaza offensive would not secure the soldier's release. Hamas-affiliated militants holding the hostage previously made that demand, but this was the first time the government did.

"This has been exercised by previous Israeli governments with Hezbollah and the PLO, and this is what other countries do in conflict situations," the Palestinian Information Ministry said.

It was Israel's first ground offensive since it pulled all of its soldiers and settlers out of Gaza last summer, and Palestinians, holed up at home, were bracing for a major strike. Israeli Prime Minister Ehud Olmert said Israel wouldn't balk at "extreme action" to bring the soldier home, but had no intention of reoccupying Gaza.

Palestinian President Mahmoud Abbas deplored the incursion as a "crime against humanity," and a leading Hamas politician issued a call to arms against the Israeli troops.

Complicating matters is a second Israeli being held by the Hamas-linked Popular Resistance Committees, one of the three groups that carried out Sunday's assault: An 18-year-old Israeli who disappeared on the West Bank apparently while hitchhiking on Sunday evening, reports CBS News correspondent Sheila MacVicar. Eliahu Asheri's captors have produced a copy of his identification card, and say that they will kill him unless Israel departs from Gaza quickly.

Troops in Israel backed up the assault, firing artillery into Gaza.

"We won't hesitate to carry out extreme action to bring Gilad back to his family," Olmert said. "All the military activity that started overnight will continue in the coming days."

Olmert repeated that Israel will not negotiate Shalit's release with militant groups.

Shalit was taken captive on Sunday during a Palestinian attack on a military post in southern Israel.

"He is definitely in our sights ... he is a target," Ramon told Army Radio. "Khaled Mashaal, as someone who is overseeing, actually commanding the terror acts, is definitely a target."

Israel's military incursion into Gaza will not change Hamas' demand for the Jewish state to release Palestinian detainees in exchange for a captured Israeli soldier, a senior Hamas official said Wednesday.

And if Israelis do not negotiate a prisoner swap, Palestinians militants will conclude that they should capture more Israeli soldiers or "kill soldiers even if they have the opportunity to capture them," Hamas' representative in Lebanon, Osama Hamdan, told The Associated Press.

Normally bustling streets in southern Gaza were eerily deserted midmorning, with people holed up inside their homes. A few children from nearby Bedouin encampments played in the streets, and two women in a donkey cart drove near the airport in Rafah.

The Rafah crossing between Gaza and Egypt — Gaza's main link to the outside world — has been closed since the attack Sunday in which the Israeli soldier was taken captive. Usually, there is some activity in the area, even when the passage is closed, but on Wednesday, it was empty.

A small grocery near the long-closed airport at Rafah was open, but no one was inside except the owner, 45-year-old Allah Abu Jazr.

"All options are open, but let's hope this crisis will pass," Abu Jazr said. "We want the soldier to return home, just as we want our prisoners to come home."

Masked militants from various armed factions took up defensive positions around Gaza City in the northern part of the strip. Militants said they fired a rocket early Wednesday at the Israeli village of Nahal Oz, the Israeli forces' staging area, and at other Israeli targets.

Capt. Jacob Dallal, a military spokesman, said the army was prepared for a long operation, if necessary.

"We have a vast variety of military options available to us and everything is on the table," he said. At the same time, Israel is keeping diplomatic channels open during the Gaza operation with the hope that contacts could win the soldier's release, Dallal said.

The militants who seized Shalit have demanded the release of hundreds of Palestinian women and youths held in Israeli jails in exchange for information about the captured soldier.

Many of the militants and suicide bombers have been younger than 18 years of age.

Nizar Rayan, a leading Hamas political figure, urged fighters on the Hamas radio station to take up arms and fight the Israeli troops in "the battle of liberating the prisoners."

Rayan urged Palestinians not to give any information about the soldier "for free" and asked the Palestinians in the West Bank to also "revolt" against the invasion of Gaza.

"Defend your prisoners. Work hard until the 10,000 prisoners are free. Don't give any information," he said, referring to all Palestinian prisoners held by Israel.