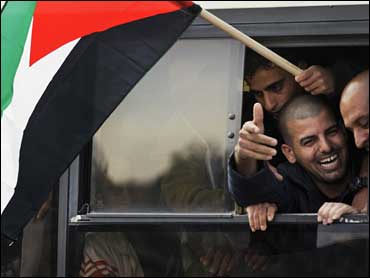 The prisoners, most of them from Abbas' Fatah movement, were given a joyous welcome as they arrived at military checkpoints in the West Bank and Gaza. Cars honked horns, tearful relatives raised Fatah flags and pictures of Abbas and some carried prisoners on their shoulders.

"There's nothing better than freedom," said Salem al-Saqqa, about 30, after he reached Gaza and kissed his mother. Al-Saqa had served four years of an 11 year term, and said Abbas must do everything he can to win the release of the thousands still imprisoned by Israel.

The prisoners had begun their journey at dawn, lining up in a courtyard at the Ketziot Prison Camp in the southern Negev Desert. Wardens and security agents sitting at tables checked names against a list, clamped handcuffs on the prisoners and put them on waiting buses heading to the West Bank and Gaza.

The Israeli prison service said it sent 408 to the West Bank and 21 to Gaza.

Parents of some prisoners said they were eager to make up for lost time.

Abdel Raouf Injas, 52, was waiting at the Beitouniya checkpoint in the West Bank to greet his son, 31-year-old Khaled, whose 12-year sentence was cut in half. Injas said he wanted to get Khaled married as quickly as possible, and said his son planned to study for a master's degree at a West Bank university.

Injas said he had two more sons in prison. "I'm feeling good, but it's incomplete," he said of the release.

Israel is holding about 9,000 prisoners. Their freedom is a central Palestinian demand, and Monday's release - the third since July - was intended to strengthen Abbas in his struggle against the Islamic Hamas by showing Palestinians that moderation pays. The vast majority of the freed prisoners were supporters are Abbas' Fatah movement.

"This release is designed to bolster moderate Palestinians," said Mark Regev, a spokesman for Israeli Prime Minister Ehud Olmert. "The peace process cannot only be summits and words, but has to be reinforced by practical measures on the ground."

CBS News correspondent Robert Berger reports the latest prisoner release is not enough satisfy most Palestinians, who are calling for the release of all prisoners still in Israeli jails. The Israeli government says prisoners with Jewish blood on their hands will not go free.

Abbas' government had asked that 2,000 prisoners be freed, but Israel refused. Including the prisoners released on Monday, about 770 Palestinians will have been freed since July, a number the Palestinians find wanting.

"It's a unilateral move, and it's a very small move that does not fulfill the needs of the Palestinians," said Ashraf Ajrami, Minister for Prisoner Affairs. "We object to the prisoners' issue being dealt with like this. We want to release prisoners with long sentences."

On Sunday, Olmert damped optimism from the Mideast conference, saying Israel does not recognize the 2008 target date as a deadline.

"There is no commitment to a specific timetable regarding these negotiations," Olmert told his Cabinet, adding that before any deal could be carried out, Palestinians must halt militants' attacks against Israel.

It will be hard for Abbas to rein in militants that attack Israel from Gaza as long as Hamas rules the Gaza Strip. The Islamic militant group wrested control of the territory from forces loyal to Abbas in June, and remain firmly in control there.

Abbas is also struggling to impose calm in his West Bank stronghold. Israel announced that it had arrested two Palestinian policemen loyal to Abbas in the shooting death of a Jewish West Bank settler last month. Ajrami told Israel's Army Radio that despite the incident, the government is "starting to institute law and order in the Palestinian territories."

Olmert's comments reflect his internal political weakness. Hard-liners have threatened to bring down his coalition government if he makes too many concessions in peace talks with the Palestinians.

In a message that could further anger Israeli hawks, Olmert's defense minister, Ehud Barak, began promoting a proposal to compensate some Jewish settlers in the West Bank who leave their homes voluntarily, according to the Defense Ministry.

The measure would apply to settlements outside Israel's separation barrier along the West Bank. The contentious barrier would enclose main settlement blocs Israel wants to retain in a peace agreement, where two-thirds of the settlers live.

The others, about 80,000, could claim compensation if they leave voluntarily. The proposal is meant to avoid the type of violent confrontations between police and settlers that Israel experienced when it withdrew from the Gaza Strip in 2005.

Olmert told Barak the proposal merits review, but officials in the prime minister's office said there was no plan to submit it to Cabinet for discussion in the near future, a participant in the meeting said.

Settler leaders condemned the proposal. They oppose any building freeze or evacuation of settlements, even unauthorized settlement outposts that dot West Bank hilltops.