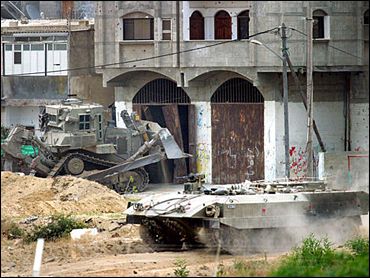 Under heavy cover fire from helicopters, Israeli troops combed the Rafah refugee camp for weapons and gunmen Tuesday in the biggest Gaza offensive in years. Residents huddled in their homes, and 20 Palestinians were killed, including two teens shot as they gathered laundry. One of the 20 was killed while handling explosives.

President Bush told a Jewish audience Tuesday that Israel "has every right to defend itself from terror" and that Palestinians must renounce violence and reject failed leaders.

Later, the White House elaborated on his comment, reports CBS News Correspondent Peter Maer. Spokesman Scott McClellan said the U.S. has voiced concerns to Israel about the destruction of Palestinian homes, but that the U.S. accepts Israel's explanation that actions are being taken to stop arms smugglers and snipers.

Not so Amnesty International, which Tuesday condemned Israel's policy of demolishing Palestinian homes as a war crime (see box).

The United Nations and European Union also demanded an end to the incursion.

The Israeli army said the aim of "Operation Rainbow" was to destroy weapons-smuggling tunnels and arrest Palestinian militants. It said it did not intend to demolish large numbers of Palestinian homes.

The army has destroyed about 100 Palestinian homes in Rafah since Friday and says more houses will be demolished, reports CBS News Correspondent Robert Berger.

Troops moved Tuesday into the Tel Sultan neighborhood on the outskirts of the Rafah camp, which is home to about 90,000 Palestinians. Bulldozers began tearing up a road to separate the neighborhood from the rest of the camp, and soldiers backed by about 70 armored vehicles conducted house-to-house searches, sometimes using bulldozers to knock down doors.

The army said most of the casualties were gunmen, killed by missiles or machine-gun fire as they prepared to attack troops.

Residents said at least nine civilians were among the dead. At least 42 Palestinians were wounded, including 12 who were in serious condition.

Yasser Arafat should take "a long look in the mirror" and decide whether to step aside in the interest of his people, Jordan's king said in an interview published Tuesday, providing a rare indication of Arab frustration with the Palestinian leader.

Israel and the United States often have pushed for Arafat to step aside, and Secretary of State Colin Powell has harshly criticized the Palestinian leader in recent days. Powell said Arafat "continues to take actions and make statements that make it exceptionally difficult to move forward," and he suggested Palestinian and other Arab leaders should persuade him to make way for a more flexible successor.

However, even though Arab leaders have been frustrated by Arafat many times over the decades, they rarely discuss who should be in charge in a fellow Arab nation.

Two Palestinians also were killed Tuesday by army fire in the West Bank, one in the city of Nablus and one near the town of Jenin.

In Rafah, the facades of buildings were riddled with holes from Israeli machine guns. Residents said they sheltered from rocket and gun fire in the innermost rooms of their homes.

Others tried to flee to safer ground. Thousands have left their homes in Rafah since the weekend, hauling away their possessions onto tractors and donkey carts.

In one incident, 13-year-old Ahmed Mughayer and his 16-year-old sister Asma were killed when they ventured onto the roof of their three-story apartment building to bring in the laundry, their father Mohammed said.

The family said the teenagers were hit by shots fired from an Israeli army position on the sixth floor of the neighboring building.

The army had no immediate comment on the incident.

The military said both air strikes — including one outside a mosque — were aimed at gunmen.

"What is happening in Rafah is an operation to destroy and to transfer the local Palestinian population, and this must not be accepted, not by the Palestinians, nor the Arabs, nor by the international community," a visibly angry Arafat told reporters at his West Bank compound.

Israel says it is targeting Rafah, near the Egyptian border, to destroy arms-smuggling tunnels. Security officials said earlier this week the army also planned to widen a patrol road between the camp and Egypt, which would mean the demolition of rows of nearby houses.

Israel's Supreme Court on Tuesday rejected a petition by 46 Rafah residents against demolition of their homes, saying that Israeli forces in the camp were engaged in battle, giving the army the right to tear down buildings which could be used against troops.