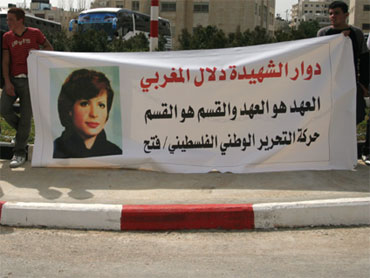 A Palestinian plan to rename a major square after a female militant who killed dozens of civilians in a notorious 1978 bus hijacking in Israel has turned into a new stumbling block for relaunching Mideast peace talks.

Israeli officials, under fire from the U.S. for hindering the negotiations with their Jerusalem settlement plans, are denouncing the move as pure incitement. U.S. Secretary of State Hillary Rodham Clinton has also said the idea could sour the atmosphere.

For Palestinians, Dalal Mughrabi is a national hero in the long struggle to form their own state, and buildings and streets in the West Bank already bear her name. The uproar, however, could deny them the moral high ground at a time Israel is coming under increasing pressure over Jewish settlements.

Three decades after her death, Mughrabi continues to cast a long shadow over the Israeli-Palestinian conflict. On March 11, 1978, she led a squad of militants who sailed from Lebanon in rubber boats, landed on an Israeli beach and killed an American photographer.

They proceeded to seize two buses, going on a rampage that killed 37 Israelis, including 13 children, according to Israeli figures. Mughrabi, who was 19, was killed. It remains the deadliest militant attack in Israeli history.

Earlier this month, officials in the Ramallah suburb of el-Bireh were set to dedicate a square after Mughrabi, coinciding with the 32nd anniversary of the attack.

The ceremony, set to take place during a visit to the region by Vice President Joe Biden, was canceled at the last minute under Israeli and American pressure, according to Palestinian officials.

But a group of activists from President Mahmoud Abbas' Fatah movement held an unofficial dedication, and Palestinian officials are pledging to move forward with a formal ceremony in the future.

While there are no signs or pictures of Mughrabi, the square already has been restored with fresh flowers and grass, and planners say they plan to hoist a large photo of Mughrabi at the site.

"We are determined to name the square after Dalal," said Adnan Damiri, the senior Palestinian security official from Fatah who has spearheaded the effort. The square is next to a security headquarters.

"I can't understand the Israeli fuss," he added, noting that Israel has named numerous streets and buildings after military heroes who killed Palestinians in battle.

Mughrabi is among the greatest heroes in Palestinian society. Schools have been named after her, and Ramallah, the Palestinian administrative center, recently dedicated a street to her memory. "She is a Palestinian martyr and deserves to be honored," said Ramallah's mayor, Janet Mikhail.

Officials in Abbas' government have tried to distance themselves from the latest controversy, calling it a local issue. But no one has spoken out against the plan.

The controversy has come at a sensitive time in peace efforts. The U.S. has been working for more than a year to get the two sides to resume peace negotiations.

Just as those talks were about to start, Israel announced plans during the Biden visit to build 1,600 new homes for Jews in disputed east Jerusalem. The announcement threw the peace talks into doubt and has drawn heavy criticism from the U.S. and the Palestinians.

Responding to the crisis, Israel has pointed to the Mughrabi case as evidence that the Palestinians are not serious about peace.

In a high profile speech this week, Prime Minister Benjamin Netanyahu accused the Palestinian government of fomenting incitement. "They named a public square after this murderer and the Palestinian Authority did nothing," he told the annual conference of the American Israel Public Affairs Committee in Washington.

Addressing the same conference, Clinton chided the Palestinians for moving forward with the plan, though she appeared to place the blame more on Hamas than the Fatah officials leading the effort.

"When a Hamas-controlled municipality glorifies violence and renames a square after a terrorist who murdered innocent Israelis, it insults the families on both sides who have lost loves ones over the years in this conflict," she said. "These provocations are wrong and must be condemned for needlessly inflaming tensions and imperiling prospects for a comprehensive peace."

The mayor of el-Bireh, a member of the militant Islamic Hamas, declined comment and apparently was not involved.

For now, Palestinians appear set to leave the issue on hold, wary of further antagonizing the Americans. But they believe Israel is using the dispute to deflect attention from its settlement policies in east Jerusalem and the West Bank - areas claimed by the Palestinians for a future state.

"This is an Israeli campaign, and unfortunately the American officials have fallen into the trap," said Nimr Hammad, an adviser to Abbas. "Every side honors its victims. The Israelis are using this issue as a pretext to take us away from the most important thing, the settlements."